I was born in 1960, and by the time I decided I wanted to be a scientist at the young age of 12, the Vietnam War had been going on for my entire life. As far as any of us of that generation were concerned, the war had been raging forever: anti-war protests and riots seemed to happen regularly, and the nightly news was filled with body counts and images of cautiously-advancing American soldiers (and, for me anyway, the indelible memory of their dogs). In school we regularly did duck-and-cover drills to prepare for the event of a nuclear attack. For all we knew, none of it would ever end.

Despite this dark backdrop, we were inundated by Star Trek and the Apollo landings. We assumed that in our lifetime the world would have flying cars, towering white cities, and space colonies. I myself was fascinated by the prospect of time travel; by black holes and the Big Bang. Science did not come naturally to me (I was slightly better at creative writing, better yet at football, and not that great at either), but it was escapist. Thinking about the expanses of space and time and about the formation of the universe, stars, planets, and life would transport me beyond the paltry scales of human existence, providing much-needed perspective.

Perhaps when those of my generation face the second half of our lives, we’re more likely to think those human scales aren’t so paltry after all. But maybe then its a little bit comforting to think that despite our seeming insignificance—despite our mortality—we did grow from infancy by taking mass from our planet, which formed billions of years ago from vast clouds of ice and dust, that were forged inside of giant stars, working only with a couple of ingredients left from the Big Bang. And, although living things account for a minuscule fraction of Earth’s bulk, life has altered our planet’s surface in innumerable ways for nearly four billion years. We humans are, of course, no exception, and if anything, we have perfected this skill to an art form, so to speak.

Be all that as it may, trying to discern where we came from is not, in the end, about escapism, nor about giving us more grandeur than we deserve. It is really about where we are going. Deciphering and unraveling the origin stories held in the world around us, through science or history or other means, is meant to give us fleeting glimpses of a map, not just of what was once behind us, but also the forks in the road ahead.

David Bercovici is the Frederick William Beinecke Professor of Geology and Geophysics at Yale University. He is the recipient of numerous awards, a fellow of the American Geophysical Union, and a member of the American Academy of Arts and Sciences. He is an expert in planetary physics and studies the origin of plate tectonics, the deep interior of the Earth, and how volcanoes work. 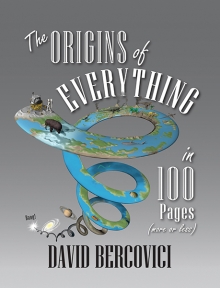