Donald Trump’s “Make American Great Again” hat. Hillary Rodham Clinton’s ubiquitous pantsuits. In 2016, both fashion items became immediately recognizable markers of political affiliation. First the candidates themselves, and then people voting for them—men and women alike—announced their politics by wearing one or the other. Such politicized fashion statements did not fade away post Election Day, either. The #GrabYourWallet movement co-founded by Shannon Coulter encourages American consumers to boycott companies owned by or supportive of the Trump family and their often not “Made in America” clothing. Other Americans, meanwhile, can show their support for Trump by buying dresses and bracelets from his or Ivanka Trump’s fashion lines. Designers as well as consumers and retailers have gotten into the game; designer Sophie Theallet made headlines when she released a public statement about her refusal to dress First Lady Melania Trump.

Hillary Clinton, Shannon Coulter, Ivanka Trump, Sophie Theallet, Melania Trump: it is notable that women—as makers, buyers, wearers, and boycotters of fashion—are often at the heart of this year’s convergence of fashion and politics. Notable, but also unsurprising. For unlike other elements of the oft unpredictable 2016 election season, this is nothing new. Fashion has long been critical to expressing and mobilizing political ideologies. And women have repeatedly been key players in its power for making partisan, patriotic, and even revolutionary political statements. Historically, fashion has provided women—even when marginalized, or completely shut out of, electoral politics—a vocal and visible political role. This was certainly true in eighteenth-century America and the larger British Atlantic World.

The eighteenth-century Hanoverian British Empire was one characterized by frequent warfare abroad and periodic bursts of protest at home. Key among the Protestant empire’s foreign enemies, of course, was Catholic France. Britain and France fought a series of wars throughout their empires—clashing in North America, India, and the Caribbean as well as in Europe. Britain and France fought cultural and commercial battles as well as military ones. In these economic and cultural skirmishes, fashion—including silk clothing—played a pivotal role.

French silk makers were among the most skilled in the world, particularly renowned for the beauty of the floral and damask textile patterns their designers created. Across the Channel, London’s silk industry, centered in the East End neighborhood of Spitalfields, felt itself in constant competition with French silks. It was not coincidental that when wealthy silk mercers and members of the silk weavers’ guild lobbied against free trade and in favor of Parliamentary boycotts of fashionable goods, one of their favorite targets was French silk. Similarly, when London’s less prosperous weavers—who were among Britain’s most notoriously troublesome labor protesters—faced market swings that led to reduced pay and heightened job competition, the most prominent scapegoat for their economic woes was the French silk industry.

In the middle of the century, a Spitalfields silk designer was singled out for patriotic praise in this ongoing battle. By designing beautiful silks “very different from the gaudy patterns of the French,” this designer had added wealth to the national exchequer, and employed “a vast number of hands.” There were many skilled designers in London’s silk industry. This one in particular was singled out for political praise in part because in France, only men were permitted to be designers. This British designer showed them up not only because she was good, but because she was, by contrast, a mere woman: Anna Maria Garthwaite. If even a woman designer could so decisively out-design the French, supporters of London’s silk industry crowed, then British fashion must be superior indeed.

Garthwaite died in 1763, the same year that the Treaty of Paris ended the Seven Year’s War and set the stage for the political crisis that ruptured the British Empire. The largest market for Garthwaite-designed silks outside London was Britain’s North American colonies. Colonial women were avid consumers of her silks. These American women and others like them in the 1760s and 1770s—merchants and consumers alike—did not sign the Declaration of Independence. Nor did they sit in the Continental Congress or (with a few exceptions) fight in the war. But they did grab their wallets, so to speak. They joined men in affixing their names to boycott agreements against selling or buying British goods like Spitalfields silk. The participation of American women merchants and consumers was crucial to the success of such revolutionary economic protest.

While these women refused to buy British goods, others were critical in supporting a nascent “Made in America” movement. The idea that Americans should not buy goods manufactured outside its borders, like the use of fashion in politics, has its roots well before 2016. During the Revolution, the female counterparts to the Sons of Liberty—the Daughters of Liberty—made, wove, and wore homespun cloth to express their patriotism. Among such women was Sally Franklin Bache, the daughter of Benjamin Franklin.

In 1779, a year after the Franco-American Alliance, Sally Franklin Bache wrote to her father, Benjamin, in France. She asked him to send her some lace and feathers to wear to convivial events to celebrate the end of British occupation of Philadelphia. Benjamin curtly admonished her to cease asking him for such fripperies and instead to concentrate on her spinning. A woman’s place in revolutionary politics, it seemed, was to make homespun. Bache’s clever reply to his admonishment that she spin rather than seek luxurious finery was a material one: evidence of homespun in the form of a gift of twenty-two yards of Pennsylvania silk for Queen Marie Antoinette.

Bache’s choice to prove her patriotism by sending her father homespun silk highlights the political possibilities fashion embodied for women during the Revolution. Franklin chided his daughter for sending it, but her gift made a great deal of sense. As Franklin well knew, his daughter was not the first to offer American made silk to a European queen. Seven years earlier, Franklin himself had offered Pennsylvania silk made by yet another woman—Susanna Wright—as a gift to King George III’s queen, Charlotte. By replicating Franklin’s earlier act of presenting American silk to a queen, but offering it to the French rather than the British monarch, Bache used fashion to announce that American allegiances had shifted away from the English crown, and toward the United States’ new ally, France. Her gesture illustrated something else, however. Bache’s gift to Marie Antoinette was a spirited assertion that women as well as men could use silk for political purposes. Her story—like that of Anna Maria Garthwaite—reminds us that, particularly for women, in the eighteenth-century fashion was politics. Both women, like Hillary Clinton, Sophie Theallet, and Ivanka Trump today, embody the fact that then as now, fashion history is political history.

Zara Anishanslin is assistant professor of history and art history at the University of Delaware. She lives in Philadelphia, Pennsylvania. 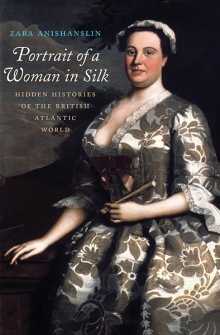