Revolutionary Horizons: Art and Polemics in 1950s Cuba, a new book by University of Maryland professor and Latin American art scholar Abigail McEwen, could hardly have appeared at a more opportune moment. Cuba is everywhere in the news lately. President Barack Obama’s visit to Cuba last March, the first by a sitting U.S. president in nearly ninety years, signaled a move to restore U.S. diplomatic ties with the island nation. When the country’s former president and revolutionary leader Fidel Castro died on November 25, 2016, at age 90, Cuba’s future became a topic of much speculation around the world. The country is still ruled by communist stalwarts, led by Fidel Castro’s brother Raúl Castro, 85, and it remains to be seen if the nascent thaw in U.S.-Cuba relations will continue, particularly in light of the U.S. government’s shift to the far right in the wake of the recent presidential election.

For the past decade or more, there has been significant art-world interest in Cuban art and artists, particularly in the contemporary art field. The Havana Biennial, intended for every other autumn, but more irregular in practice, has gradually become an essential destination for the international jet-setting contingent of contemporary art aficionados. Of particular interest lately, to U.S. and European museum curators, and gallery directors and dealers, are modern and contemporary abstract works, especially by women painters and sculptors known for hard-edge, geometric compositions. Artists such as Carmen Herrera, age 101, Zilia Sánchez, 90, and Loló Soldevilla (1901-1971), have all been the focus of major gallery and museum exhibitions in recent years. Herrera’s wonderful, and long-overdue museum retrospective is on view at the Whitney Museum in New York, through January 9, 2017.

These artists and many others whose early careers flourished in Cuba in the late 1940s and 1950s, and some who later lived and worked abroad, are among the main protagonists in McEwen’s lively and thorough investigation of mid twentieth-century Cuban Modernism, and the short-lived avant-garde movements of the period. Revolutionary Horizons: Art and Polemics in 1950s Cuba centers on several key artists groups of the early 1950s, “Los Once,” “Los Diez” and “Los Cinco,” (“The Eleven,” “The Ten,” and “The Five,” respectively). Each group was composed of a vibrant community of like-minded intellectuals, all opposed to the dictatorship of Fulgencio Batista (1901-1973), who came to power in a right-wing coup in 1952. Batista ruled the country with an iron grip until he was deposed by the 1959 communist revolution led by Fidel Castro.

A particular focus of the book is “Cuban Concretism,” an avant-garde art movement whose practitioners favored hard-edge geometric abstraction. Members of “Los Diez” were among the most prominent proponents of the genre, following the lead of the charismatic and influential Mario Carreño. Other key figures involved were Luis Martinez Pedro, Sandú Darié, and Soldevilla, who returned to Cuba in the mid-1950s, after having spent considerable amounts of time living and working in Paris. For many of these artists, abstract works offered an allegory of utopia, in defiance of the repressive Batista regime. To the general public, the art was always controversial, and generally viewed as provocative and highly charged politically.

Contemporary audiences have become accustomed to many forms of hard-edge geometric abstraction as part of an art-historical legacy dating to Constructivism in the early years of the 20th century. At mid-century in Cuba, the genre suggested a kind of coded opposition to the political status quo; and detractors often viewed the work as that of dissidents. Political motives were also perceived as the inspiration for painters who favored gestural abstraction. Guido Llinás’s dark and brooding compositions of the early 1960s, for instance, were regarded as elegiac and angst-filled ruminations on the previous decade of dictatorship and revolution. And Hugo Consuegra’s canvas Exterminating Angel (1964), with fierce, slashing brushstrokes of dark brown, black, and blue, alluded to Luis Buñuel’s, quasi-Surrealist 1962 film of the same name, a fierce anti-Franco allegory of political manipulation and social oppression.

In a recent telephone conversation, McEwen shared with me her thoughts about the evolution of the project, the implications for the book, and its particular importance at this moment in Cuban history.

David Ebony: It was amazing and remarkable for me to be reading your book at the moment of Fidel Castro’s death. The news reports in print, online, and on TV were filled with biographical material about Castro’s rise, and the seeds of the Revolution, that coincided with the period you focus on in the book. What are your thoughts about his death? How do you think Cuba will change?

Abigail McEwen: I would be surprised if there were any immediate changes of note, or anything dramatic. I think there could be more possibilities for change once his brother Raúl dies. On our side, regarding Cuba, it is especially hard to say what will happen now with a Trump presidency.

Ebony: The book seems so timely, and it’s such an unusual subject. How did it come about?

McEwen I started working on it more than ten years go. It was my PhD dissertation at NYU. I had been working with Edward J. Sullivan there. He was a terrific mentor, and is still a wonderful colleague.

Ebony When did you first visit Cuba? Did you have many contacts in place from the start?

McEwen I was there first in 2006, and then later in 2008 to 2009. I had some contacts, mostly a lot of word-of-mouth leads, but I didn’t know what it would be like on the ground, of course. I found that the curatorial team at the National Museum of Fine Arts in Havana shared an office with only two computers, and one phone line, and did not even have an electric outlet for my computer. But they generously let me work there for a couple of weeks. I had access to documents in the archives, but I was not able to see a lot of the artworks in storage.

At that time, even the curators were not allowed to go into storage without permission from their bosses, so some access was restricted to just about everyone. Right up into the late 1990s, the art I was researching was not exhibited in the museum, and actually was not considered as part of Cuba’s patrimony. It had all but been erased from Cuban art history.

There was a glaring historical lacunae. But because of the emergence of a market for these modernist works abroad, especially geometric abstraction, interest grew, and Cuba could no longer deny the existence of this whole generation of artists. By the year 2000, however, artists and art scholars had become aware of this generation, but their works were never shown throughout the 1970s and ’80s, and few people had access to them.

Ebony But why was there an attempt to obliterate this generation? The works were not overtly politically incorrect, were they? You mention in the book that even Castro himself did not take a public stance against abstract art.

McEwen That’s right. Following the revolution, there was not a mandate for socialist-realist art, as there was in other communist countries. Castro, smartly, did not want to make that an issue in Cuba. He publicly stated that he was fighting capitalism and imperialism, and not abstract art or contemporary art. However, many of the avant-garde artists were gradually removed from teaching positions, and their works were no longer shown. In general, their profiles were greatly diminished. And, as I discuss in the book, many of artists left Cuba shortly after the revolution. Those artists were thoroughly scrubbed from Cuban art history. There were, though, some artists who stayed and tried to make peace with the new regime.

Ebony The book centers on several artists groups:  “Los Once,” “Los Diez” and “Los Cinco,” (“The Eleven,” “The Ten,” and “The Five,” respectively). Can you just give a brief overview of them, and talk about their importance?

McEwen “Los Once” are the main protagonists of my book. They showed in different configurations. The group spoke to a generational movement—most of these artists were under thirty, or just in their thirties. They were protesting against the Batista dictatorship. There was a remarkable effort on the part of the expressionist or gestural painters, as well as those engaged in geometric abstraction, to connect Cuba with the international avant-garde through the language of contemporary art.

Ebony You have a very vivid account in the book of political events going on 1953, the same year as one of the important exhibitions of “Los Once.” What was the relationship between the art world and the revolution that was fomenting at that moment? Was there an elitist attitude toward painters and artists that they were conscious of at the time, or was that only in retrospect?

McEwen The artists were opportunistic in some ways—it was savvy to connect their practice, which was new and controversial, to the new revolutionary discourse. The artists were active in publishing, and trying to generate momentum around art. They were writing, and thinking more critically about their position internationally. I don’t know if it was just an interesting coincidence, or if the art would not have developed in the same way without the revolutionary backdrop. The artists were opposed to Batista, and generally supportive of Fidel, but there were diverging levels of political commitment, which is one of the reasons why the group eventually dissolved itself.

Ebony Lately in the U.S., and other countries, Carmen Herrera, Zilia Sánchez, and Loló Soldevilla, the prominent Cuban women artists of the day, are receiving a great deal of attention. Why is that the case?

McEwen It is great to see that happening. Herrera’s show at the Whitney is incredible. I think that in the past fifteen years there has been a growing interest in women artists generally, and especially those who had been neglected by traditional art-historical accounts. Among these particular artists, Soldevilla did not take up art seriously until her middle age; she was heavily invested in the art and art world of Paris, and she trained herself there. Perhaps her greatest legacy is as a facilitator for other artists. She brought back many artworks from Paris, which would have a significant impact on Havana’s avant-garde in 1956 and 1957.

Ebony The salon of 1959, which you discuss in depth in the book, was in a way the swan song for the Cuban avant-garde. What happened?

McEwen There was great expectation for this show. It was kind of bittersweet. What would the revolutionary art of Cuba look like? Many of the artists of “Los Once” or “Los Diez” thought they had a revolutionary agenda for their work. They had played a part in a radical movement in art that had begun in 1952—and its moment seemed to have arrived. But by the end of 1959, the tide had already shifted. Many critics hedged their bets; while they generally admired the work in the salon, they questioned whether this art was revolutionary enough. Many began to doubt that there was any place at all for abstract art in the Revolution. 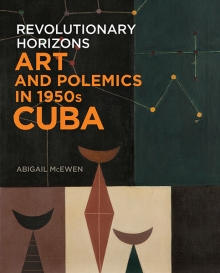