Things look bleak for congressional Democrats. Though they gained seats in the U.S. House of Representatives last November, and have enough Senators in their ranks to filibuster legislation, they remain a minority party in both chambers. Even worse for them, the incoming president is a Republican, which puts their party in the “deep minority.”

Needless to say, the deep minority is not the place a political party wants to be. It has little control over the legislative agenda, gets few opportunities to conduct oversight over the executive branch, and struggles to garner media attention. This is especially so for Democrats in the U.S. House, a majoritarian body that gives the governing party substantial power. It should therefore come as little surprise that minority parties in the House are prone to internal divisions, demoralization, and infighting.

All is not lost for congressional Democrats, however. In fact, minority parties, even in the House, can exercise influence over policy and politics. Just this past Congress, for example, House Democrats temporarily blocked legislation establishing a “fast track” process for approving trade agreements, forced Republicans to withdraw a spending bill from the floor over a dispute about flying the Confederate flag, and denied Republicans enough votes to override a veto of a measure disapproving the Iran nuclear agreement.

With Obama’s departure from the White House, congressional Democrats will say goodbye to an ally who can veto undesired bills or shape policy via executive actions. But in exchange for losing the White House, Democrats no longer have to worry that their reputation will be tied to that of the president. Furthermore, they lose any expectation of supporting the White House’s agenda. After Bill Clinton was elected president in 1992, sending Republicans into the deep minority, then-whip Newt Gingrich (R-GA) cheered his party’s “liberation from the tentacles” of George H. W. Bush’s presidency.

So how do Democrats take advantage of their newfound lack of power in Washington? History suggests a number of strategies they should follow to maximize their influence in the short term and, perhaps, get themselves back in the majority in the not-too-distant future.

First, House and Senate Democrats should stay as unified as possible. A unified minority party puts pressure on the majority to build winning coalitions within its own ranks. If Republican party leaders cannot get Democratic votes to offset defections within their own party, their power to enact legislation greatly diminishes. Indeed, Republicans are already showing signs of internal division, with some G.O.P. Senators questioning the party’s strategy for repealing Obamacare, while Speaker Paul Ryan must contend with conservative members of the often-troublesome House Freedom Caucus.

Second, Democrats should find ways to partner with Republicans whenever possible. There are some intriguing areas of agreement across party lines, such as federal aid for new infrastructure spending and opposition to Russian espionage. And as two political scientists recently pointed out, the parties do vote together on more bills than people realize, suggesting bipartisan cooperation is far from extinct—even on Capitol Hill.

Third, since they lack much legislative leverage, Democrats should maximize messaging efforts to gain attention to their agenda and pressure Republicans in Congress and the White House. Press conferences, “shadow” hearings, and social media campaigns are among the tactics available to the minority. Last year, for instance, House Democrats conducted a floor protest last year to protest congressional inaction over gun violence. And Democratic Senators have already started using floor speeches and messages on social media to speak out against repealing Obamacare.

Fourth, Democrats would be well advised to direct substantial energies towards electioneering. Legislative tactics alone do not guarantee success at the ballot box. Minority parties in Congress that have become a majority worked hard to recruit and train strong electoral candidates, raise money, and develop a campaign agenda to inspire candidates and supportive voters.

Finally, and perhaps most important, regardless of what strategy Democrats pursue, they should encourage their members to develop innovative tactics—what former Congressman Thaddeus McCotter (R-MI) called “entrepreneurial insurgency.”  There is no tried-and-true method for minority parties to get their way, and many of the minority party tactics we take for granted, like raising money primarily for challengers rather than incumbents or organizing daily floor speeches around particular themes, were initially untried experiments by a member of the minority party. The 2016 sit-in, for instance, was not itself a new idea, but the use of social media to broadcast it was.

None of this should be taken as an effort to sugarcoat the situation Democrats are in. It will be depressing and frustrating for them to watch as Republicans enact undesirable bills, deny them opportunities to influence policy, and get the bulk of media attention. But with effort, strategic thinking, innovation, and a little bit of luck, the minority party may find that it has far more political leverage than it thinks.

Matthew N. Green is associate professor of politics at the Catholic University of America in Washington, D.C., and associate fellow at the Institute for Policy Research and Catholic Studies. He is the author of Underdog Politics. 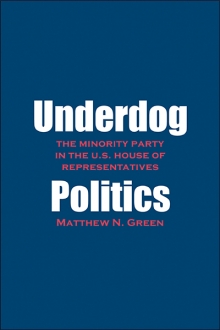