In 1787 when Benjamin Franklin left the Constitutional Convention a lady famously asked “Well Doctor, what have we got, a republic or a monarchy?” “A republic,” Franklin replied tartly, “if you can keep it.” Now, 230 years later, Franklin’s observation on our Founders’ great experiment haunts us.

Two years later, at President Washington’s inauguration, he was among the nation’s wealthiest men, owning nearly 60,000 acres and 276 slaves at his death. Like President Trump he could have said “I’m really rich.”

Washington actively sought wealth; but he and other founding fathers worried that great inequalities of wealth posed problems for a republic. Though in 1776 they boldly declared “all men are created equal,” they recognized that privilege was an essential part of their world. Indeed while their egalitarian rhetoric served their short-term interest by mobilizing common men to fight the vaunted British army, it is hard for us to imagine that the gentlemen signers of the Declaration, mostly slave owners, truly believed “all men are created equal.”

How could Washington, Jefferson, Adams, Franklin, and their colleagues have possibly been so short-sighted as to suppose their language of equal rights would not have long-term consequences?  In reality, though the founding fathers inhabited a realm of rank and privilege, some expressed egalitarian hopes. Washington, who chaired the Constitutional Convention, believed America would be “advantageous to the happiness of the lowest class of people, because of the equal distribution of property.”

The Declaration’s commitment to the idea that “all men [and women] are created equal,” rested on the authors’ belief in individual property rights, including the right to pass property to one’s heirs. Property ownership, they were convinced, was the prerequisite for personal independence. Those who lacked property—women, children, and slaves—depended on others for their bread.

The nation’s boundless supply of land seemed to offer property to all willing to seize the opportunity. Because the founders believed America’s indigenous peoples had no need for hundreds of millions of acres, settler ownership, already widespread in the colonial era, could expand. The result: a nation of small landowners—the egalitarian “Jeffersonian democracy.” Unlike the Old World, differences between the few and the many would be only matters of degree, not kind.

To assure this goal the Revolutionary generation forbade titles of nobility and by ending the English practice of entail, they assured that landed property could be divided among heirs rather than enriching eldest sons only. “In Governments like ours,” James Madison declared, “a constant rotation of property results from the free scope to industry, and from the laws of inheritance.” Across time the “vicissitudes of fortune” would block the permanent development of huge disparities of wealth, or so Madison’s generation believed.

What the Revolutionary generation did not foresee was the profound impact of the industrial and post-industrial revolutions on wealth creation. This new wealth, epitomized by the Rockefellers in the first Gilded Age and magnified today, is so vast that, given legal instruments like perpetual trusts, “the vicissitudes of fortune” are effectively cushioned, making a hereditary aristocracy of wealth seem inevitable. Consider: when Washington took office his $25,000 salary was the largest in the land—roughly 60 times that of the common farmer. In 2014, by contrast, for the nation’s largest corporations the average CEO enjoyed compensation of $16,300,000—about 40 times that of the U.S. president and 300 times that of average employees. Indeed, in the U.S. there are reportedly 5,000 households each possessing over $100,000,000 in net worth, assets so abundant that perpetual riches are virtually assured to family members. For them, at least, Madison’s expectation of “a constant rotation of property” is remote, making Washington’s belief in the relatively “equal distribution of property” an antique fantasy.

The contradiction between the founders’ ideal and current policy should be considered when President Trump and Congress address tax reform. Perhaps, given Americans’ deep commitment to individual liberty coupled with heritable private property, the nation should accept a new reality where a hereditary aristocracy of wealth rules, however antithetical to the founders’ republican ideal. One alternative, confiscatory taxation, will not command majorities.

But the proven, mid-twentieth-century approach enacted by Presidents, Congress, and the states to alleviate the “Rockefeller problem”—progressive income and inheritance taxes—remains popular. Judiciously applied, and with tighter laws on trusts, off-shore assets, and other tax provisions designed for the very rich, such a policy could work again.  Then the United States—notwithstanding differences of wealth—might yet achieve a society where something like equal opportunity prevails.

Richard D. Brown is Board of Trustees Distinguished Professor of History, Emeritus, at the University of Connecticut. His previous books include Knowledge Is Power: The Diffusion of Information in Early America, 1700–1865; The Strength of a People: The Idea of an Informed Citizenry in America, 1650-1870; and the co-authored microhistories The Hanging of Ephraim Wheeler: A Story of Rape, Incest, and Justice in Early America and Taming Lust: Crimes Against Nature in the Early Republic. He lives in Hampton, CT. 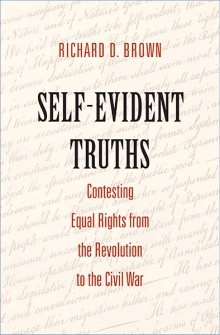