Last night I went to see the new film Jackie, in which Natalie Portman gives a searing portrait of Jacqueline Kennedy in the immediate aftermath of her husband’s death. It made me think of the similarities and differences between Jackie Kennedy and Blanche of Castile, the queen of France who lived some seven hundred years earlier. Like Jackie Kennedy, Blanche was widowed unexpectedly. Her husband, Louis VIII, died of dysentery on the way back from a military campaign that had more or less brought southern French, the Languedoc, under the control of the French kings. Like John F. Kennedy, Louis was young, only thirty-seven; his rule had been short, a mere three years, from 1223-1226. Blanche, like Jackie, was devastated; like Jackie, felt she must protect her husband’s legacy, especially his control of the Languedoc.

The film is a sort of meditation on power, and it shows the speed with which power slips away from Jackie and the Kennedys as Lyndon Johnson becomes President. But power didn’t slip away from Blanche at her husband’s death. Far from it. Like John F. Kennedy, Louis VIII left a young family. His eldest son was only twelve, too young to rule in his own right. On his deathbed, Louis VIII left the care and control of his son and heir, Louis IX, and the kingdom of France, in Blanche’s capable hands. Louis must have known that Blanche would be up to the task.

Blanche was born to power. She was the granddaughter of Henry II of England and the niece of Richard the Lionheart. There were powerful women in her ancestry, not least her grandmother Eleanor of Aquitaine and her great-grandmother, the Empress Matilda. Her marriage was a political alliance between the Capetian kings of France and their enemies, the Angevin kings of England. She proved a formidably effective regent for the eight years of Louis IX’s minority. During Louis IX’s personal rule between 1234 and 1248, Blanche played an active political role. When Louis IX went on crusade in 1248, he left Blanche once again as sole regent for the kingdom, a role in which she died in 1252. Contemporary commentators have noted that everything fell apart at her death.

A medieval king’s death did not mean that his wife must leave the scene, in the way that the death or political defeat of a modern statesman does. In fact, like many medieval female rulers, Blanche enjoyed her most effective power as a mother rather than a consort. She sent armies to the south of France to consolidate her husband’s gains there and negotiated the treaty that confirmed them in 1229. Like her husband, she used war, diplomacy, astute gifts, and marriage strategies to contain the power hunger of the French barons. Blanche used hard power, but she certainly used soft power too. She saw to the commemoration of her husband, building the abbey of Royaumont for the salvation of his soul. She made sure people were aware of her position as the widowed mother of young family, crafting an image of a “royal family” almost in anticipation of Queen Victoria, or Queen Elizabeth II. Her youngest son, Charles of Anjou, King of Sicily, called her the “holy root” of the Capetian family, the source of the familial piety. Like Jackie Kennedy, she brought an appreciation of visual, literary, and musical culture to what had been the rather dull Capetian court.

Fast forward to the twentieth century. Jackie shows Jackie Kennedy’s determination to establish her husband’s legacy—the legacy of a new type of presidency for the televisual age, a presidency of international culture with the glamour of Camelot. This was the legacy of a president who, like Lincoln, represented hope for his people, and whom in death his people would mourn as a great lost leader. But it suggests that Jackie’s use of the soft power of cultural patronage to forge the image of Camelot during her husband’s presidency—and her determination to preserve that legacy with the ceremony of death—is the way that a woman can wield power. The female consort’s power, it suggests, resides in the choice of wallpaper, or the meticulous planning of a funeral. In this, it aligns itself with much of the work on medieval queenship, which has tended to focus on the way that a medieval queen could assert herself through the soft powers of cultural or religious patronage, or perhaps through gesture, ritual, and family commemoration.

But this was not always the case for the medieval female consort. Blanche certainly did use these soft powers; but she used the harder magisterial and coercive powers too. And I don’t think that it is only women rulers—either in the thirteenth century, the twentieth, or the twenty-first—who use soft powers. John F. Kennedy was surely as conscious as Jackie of the importance of image in the televisual age; they developed and implemented the image of Camelot together. Blanche and her husband, the highly-educated Louis VIII, who both loved heraldry and chivalric pursuits, combined to turn their court into the Camelot of its day. And the predilection for visual and literary patronage, which Blanche brought to the Capetian court, was not a contribution in female soft power, but was traditional among both the women and the men of her Anglo-Norman and Angevin forbears.

A ruler will surely use the full register of powers at his or her disposal. Blanche of Castile certainly did. And I think she would have loved the film.

Lindy Grant is professor of medieval history, University of Reading, and was previously medieval curator at the Courtauld Institute, London. 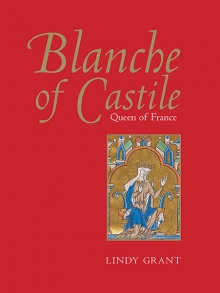