The history of children’s books is still being written. While there are important writers working in the field, much needs to be done to bring the rigor of mature literary, sociological, and historical investigation to this relatively young field of study. One of the challenges to research is the primary material of childhood reading. In the eighteenth and nineteenth centuries, many publications were reprinted and pirated, or authors’ names were hidden under treacly pseudonyms such as Dame Wonder, Grandmamma Easy, Grandpa Pease, and Peter Parley. These first waves of “mass market” books for children present hurdles for researchers who attempt to reveal the mechanics behind the creation of children’s books.

When the veil is lifted, we see  women—lots of them. Girls, too. They were employed as illustrators, writers, and colorists. Even while authors such as Louisa May Alcott and Frances Hudgson Burnett were becoming known for their books for older readers, there were scores of unnamed women who produced content for cheap editions of stories and picture books. Only rarely were authors listed in inexpensive publications aimed at the children of a rapidly-growing middle class.

In the twentieth century, in light of the modernization of books for children (in subject matter, illustration styles, and production quality), we see a standard of naming authors and artists, giving credit where it was due – and beginning a sort of superstar system that remains very strong today. However, the role of women in the last century as creators of juvenile books still remains somewhat obscured to many readers. We may know the works of Margaret Wise Brown, Esphyr Slobodkina, Wanda Gág, Ruth Krauss, and Louise Fitzhugh, but less well-known to us are Ursula Nordstrom, Anne Carroll Moore, Lucy Sprague Mitchell, and Augusta Baker.

Mitchell and Moore played crucial roles in how books for children were created and distributed in the early twentieth century. Lucy Sprague Mitchell was a progressive thinker in the John Dewey mode who established the Bureau of Educational Experiments in New York City in 1916. Over the years, the Bureau grew to encompass a nursery school and a teacher training program, eventually becoming known as the Bank Street School of Education. One of the landmark projects of the Bureau was the publication of The Here and Now Story Book in 1921, which focused on the real lives of children.

This “real life” approach earned the scorn of Anne Carroll Moore, the head of the Children’s Division of the New York Public Library, who strongly believed that children needed fantasy and fairy tales, not stories about cars and busy city streets. The animosity between Moore and Mitchell was so strong that even Goodnight Moon, perhaps the best-selling children’s book of the Twentieth Century, and one that exemplified the tenets of the Bank Street School of storytelling, was not carried by NYPL branches until 1973.

Augusta Baker, another librarian at the NYPL, the 135th Street Branch, was more sympathetic to new types of children’s literature. Her bibliography, Books about Negro Life for Children (1946, updated and republished in 1971 as The Black Experience in Children’s Books) was influential in many ways. It listed books that showed African-American life outside of the often insulting and brutal stereotypes that had been popular in children’s books for centuries and in doing so, Baker encouraged new artists and writers to expand her list by making new works.

Ursula Nordstrom’s influence on the commercial side of children’s publishing is massive. As the editor for juvenile titles at Harper & Row for over three decades, she brought into print books that are now considered classics, including: Where the Sidewalk Ends, Where the Wild Things Are, Bedtime for Frances, Harriet the Spy, and Freaky Friday. She discovered talent, nurtured it, and helped authors and artists find their voices and visions.

These four women may not be known to the main consumers of children’s literature, nor to many adults who collect juvenile books, but they shaped the market and readership for the genre over the course of the twentieth century. 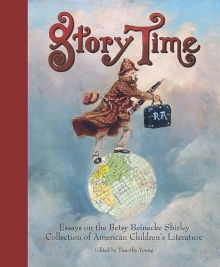