One of the greatest of all Christian theologians turns out to be in some respects a full-blooded materialist. This is not entirely surprising, since Christianity itself is in some sense a materialist creed. The doctrine of the Incarnation means that God is an animal. He is present in the Eucharist in the everyday stuff of bread and wine, in the mundane business of chewing and digesting. Salvation is not primarily a matter of cult and ritual but of feeding the hungry and tending the sick. Jesus spends much of his time restoring damaged human bodies to health, along with a number of deranged minds. Love is a material practice, not a spiritual sentiment. Its paradigm is the love of strangers and enemies, which is unlikely to generate much of a warm glow. Wittgenstein remarks provocatively that “love is not a feeling,” though, as it happens, it is not the proper anonymity of charity that he has in mind. He means that love is not something you might feel for only eight seconds, as you might feel pain. It would not make sense to say, “That couldn’t have been pain, or it wouldn’t have passed off so quickly,” but it would make sense to say it of love. You cannot be violently in love with someone only for the length of time it takes to put the cat out. Love is dispositional, situational, embedded in a context and narrative. Even so, though Wittgenstein is not thinking of the Christian gospel here, “love is not a feeling” is a proposition it would most certainly endorse.

Materiality is blessed for Christianity because it is God’s creation. James Joyce was a devotee of Aquinas, and Ulysses, a novel to which nothing corporeal is alien, is in some sense a Thomist text. The Christian belief is in the resurrection of the body, not the immortality of the soul. The sexual coupling of bodies is in St Paul’s view a foretaste of the kingdom of God. The Holy Spirit is not some sacred spook but a dynamic force that shatters and transforms the face of the earth. Faith is not a solitary mental state but a conviction which springs from sharing in the practical, communal life- form known as the Church. It is folly to high-minded Greeks, a carnivalesque affair which pits the common life against hermetic ideas, exalting the lowly and toppling the mighty from their thrones. It consists primarily in a commitment to the death, not in a set of theoretical propositions. Even Friedrich Nietzsche, who considered Christianity to be the greatest catastrophe ever to befall humanity, thought that to reduce it “to a holding something to be true, to a mere phenomenality of consciousness,” was to travesty it. At its center is a lowly itinerant who excoriates the rich and powerful and consorts with crooks and whores. Since his solidarity with the poor constitutes a thorn in the flesh of the priestly and political elite, he ends up suffering the kind of grisly death reserved by the Roman imperial power for political rebels.

Aquinas has a somewhat more subtle conception of matter than the mechanical materialists. As Denys Turner puts it, his objection to such materialists “was that they were simply not very good on the subject of matter.” There is, Turner remarks, “a lot more to matter itself than meets the eye of today’s average materialist.” Human beings, he writes, are in Aquinas’s view “matter articulate, stuff that speaks.” “Today’s materialists,” he complains, “believe that matter is all there is, and that matter is meaninglessly dumb, for all meaning is talk about matter, none of it matter talking.”

The body, then, is meaningful matter, a point which applies to dingoes as much as to humans. Practical intelligence is for the most part bodily intelligence. A small child who has yet to acquire speech reaches out to grab a toy, and the gesture is inherently meaningful. It belongs, one might claim, to a layer of somatic, pre-verbal signification inscribed in our very flesh. The meaning clings to the action like a lining to a sleeve. It is built into the material gesture. It is not just a question of an observer’s interpretation of the act. Neither is it a matter of the child’s own conception, since he or she lacks as yet the means to formulate one. Yet, if the body is articulate matter, isn’t this also true of a hosepipe or a garden gnome? Hosepipes are not of course capable of speech, but they are bits of articulate matter in the sense of being significantly structured. However, it is human beings who design them, imprinting the dumb stuff of rubber and metal with intentionality, shaping them to perform a function. In any case, the human body is not just inscribed with meaning; unlike garden gnomes, it is also the source of it.

From Materialism by Terry Eagleton, published by Yale University Press in 2017. Reproduced by permission.

Terry Eagleton is distinguished professor of English literature, University of Lancaster, and the author of more than fifty books spanning the fields of literary theory, postmodernism, politics, ideology, and religion. He lives in Northern Ireland. 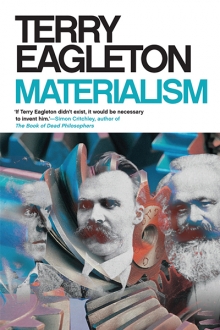