Our current use of the terms “religious” and “secular” are determined by the senses they have acquired in modernity. Since they have no equivalents in any of the classical Buddhist languages, we must use them with caution when talking of premodern Buddhism. The same is true of the very word “Buddhism,” a term coined by Western scholars in the nineteenth century, which also has no equivalent in Pali, Sanskrit, Chinese, or Tibetan. For this reason, I prefer to use the word “dharma,” which I will not translate. At the same time, I cannot pretend that I am not a modern Westerner. I find myself bound to a language that is in many ways inadequate and misleading but, whether I like it or not, happens to be the one we speak.

What sort of Buddhism does a self-declared secular Buddhist like myself advocate? I do not envision a Buddhism that seeks to discard all trace of religiosity, that seeks to arrive at a dharma that is little more than a set of self-help techniques that enable us to operate more calmly and effectively as agents or clients, or both, of capitalist consumerism. We could make the case that the practice of mindfulness, taken out of its original context, reinforces the solipsistic isolation of the self by immunizing practitioners against the unsettling emotions, impulses, anxieties, and doubts that assail our fragile egos. Instead of imagining a dharma that erects even firmer barriers around the alienated self, let us imagine one that works toward a reenchantment of the world. Doing so will require the cultivation of a sensibility to what might be called the “everyday sublime.”

I do not see secular Buddhism as the end result of the secularization of Buddhism, which renders Buddhist ideas and practices palatable and useful for those who have no interest in committing themselves to the core values of the dharma. The kind of secular Buddhism I envisage would consider those core values to be a necessary framework for humans to flourish and to realize ultimate concerns.

Buddhism today commonly impresses people as a slightly aloof monastic religion committed to training its followers in meditation, morality, and philosophy. Historically, this version of Buddhism is very recent. While it may accord with some of the idealistic representations that Buddhists have preserved of themselves in their textual memory, it ignores the complex relationships that actual Buddhist institutions had with the societies of which they were an integral part. In premodern Asia, the Buddhist vihāra, or temple, was a home for those who rejected or fell foul of the norms of society and aspired to cultivate higher values. Depending on the country, it could also be a farm, a granary, a courthouse, a fort, a school, an arts center, a hospital, a bank, an orphanage, a refuge for abandoned animals—as well as a place to perform religious rites (particularly for the deceased) and receive pastoral care. For some, it was also where they might find someone who could instruct them in meditation and philosophy.

One of the consequences of modernization throughout Asia has been to deprive Buddhism of many of its secular functions. While the pace and manner of change vary from country to country, the state has come to assume many of the roles (health care, education, the care of orphans) that was once the preserve of the temples. As a result, monks’ and nuns’ activities now often tend to focus on pastoral and spiritual matters. With the widespread adoption of mindfulness meditation in counseling and psychotherapy, even these functions are now being coopted by secular bodies.

The shift toward a more secular approach to Buddhism is not new. As Buddhists sought to come to terms with modernity in the past century, a number of secularized variants of traditional forms arose. The worldwide Vipassana community, for example, has its origins in a reform movement among Burmese Buddhists toward the end of the nineteenth century. The aim of the reformers was to affirm an indigenous religious identity capable of standing up to the Christianity and rationalist humanism of the British colonial power. Contemporary Western forms of vipassanā meditation spawned the secular mindfulness movement, whose leading teachers are predominantly lay. The Soka Gakkai, one of the largest global Buddhist movements today, started in Japan in the 1920s as an educational society affiliated with the Nichiren Shoshu school, founded by the thirteenth-century Buddhist reformer Nichiren Daishonin. Since 1992 it has distanced itself from the Nichiren Shoshu priesthood and now operates as a primarily lay movement. In the late 1970s the Kagyu/Rimé lama Chögyam Trungpa explicitly envisioned a secular path of meditation, called Shambhala Training. Although Trungpa conceived of this path as separate from his Buddhist Vajradhatu organization, after his death the two were incorporated into what is now known as Shambhala Buddhism, one of the most active and successful Buddhist movements in the United States.

Despite the secular tone and lay teachers of these movements, all three have an ambivalent relation with the dogmas and hierarchies of the Buddhist institutions from which they originated. Although there may be a reduced public display of overt religiosity in their centers and a deliberate effort by teachers to present the dharma in terms of its psychological and social benefits, little effort has been made to critically reexamine the underlying worldview of Buddhism, in which are still embedded the cosmology and metaphysics of ancient India. To develop an understanding of Buddhism in any of these movements means confronting the traditional doctrines of karma, rebirth, heavens, hells, and supernormal powers.

The secular Buddhism I anticipate would be more radical than any of these secularized Buddhist movements. Its advocates would seek to return to the roots of the tradition and rethink and rearticulate the dharma anew. Just as the term “Tibetan Buddhism” describes the kind of dharma that evolved in Tibet, so, in its broadest sense, would “secular Buddhism” describe the kind of dharma that is evolving in this secular age.

Although many modern Asians are Buddhists who find themselves becoming secularized, I am a secular European finding out what it means to become a Buddhist. We might meet each other on the road, but we are heading in opposite directions. Just as their Buddhism is being challenged by secularity, so my secularity is being challenged by Buddhism. My concern, therefore, is as much about imagining a Buddhist secularity as about imagining a secular Buddhism. We have seen what can happen to Buddhism when it becomes secularized, but what would happen to a secular perspective inflected by the principles and values of the dharma?

What is taking place between Buddhism and secularity is, at its best, an open-ended dialogue between two partners rather than an attempt by one partner to forcibly impose a viewpoint on the other. In After Virtue, the Scottish philosopher Alasdair MacIntyre recognizes that “a living tradition . . . is an historically extended, socially embodied argument, and an argument . . . about the goods which constitute that tradition.” Central to such a concept of tradition, he maintains, “is that the past is never something merely to be discarded, but rather that the present is intelligible only as a commentary upon and response to the past, in which the past, if necessary and if possible, is corrected and transcended, yet corrected and transcended in a way that leaves the present open to being in turn corrected and transcended by some yet more adequate future point of view.”

From After Buddhism by Stephen Batchelor, published by Yale University Press in 2015. Reproduced by permission.

Stephen Batchelor is a teacher and scholar of Buddhism. He trained as a monk for ten years in traditional Buddhist communities and now presents a secular approach to Buddhist practice. The author of the bestselling Buddhism without Beliefs, he lives near Bordeaux, France. 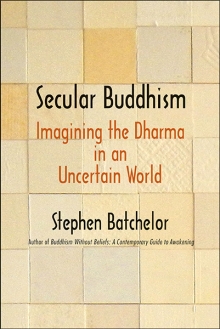 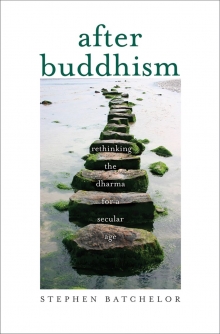