On January 27, 2017, President Donald Trump issued an executive order entitled “Protecting the Nation from Foreign Terrorist Entry into the United States.” The order, which banned nationals of seven countries from entering the United States, originally extended to dual citizens, green card holders, and those already approved for travel. In the hours and days that followed, protesters, lawyers, and activists headed to the nation’s airports. Contemplating questions of constitutionality and civil rights, federal court judges in Massachusetts, Virginia, and Washington issued temporary injunctions and nationwide halts.

The most prominent of these juridical declarations came from what may initially seem an unlikely source: Judge James L. Robart, a Bush-era appointee who received a 99-0 confirmation vote by the United States Senate in 2004. In response to attorneys who argued that the ban was justified, Judge Robart averred, “I’m . . . asked to look and determine if the executive order is rationally based. And rationally based, to some extent, means I have to find it grounded in fact instead of fiction.”

“Grounded in fact instead of fiction” proves both an appropriate frame through which to consider the current political moment as well as the field of Asian American studies. In a time marked by “alternative facts,” fabricated accounts about attacks, and fictitious allegations of fraud, a commitment to the facts is a posture of resistance. Such a posture initially undergirded the formation of Asian American studies, an field born out of mid-twentieth century student protests and anti-war movements. For Asian American activists, historical facts surrounding exclusion, incarceration, internment, and discrimination were integral to rights-oriented calls for inclusion in U.S. society and the American academy.

Such memory-oriented labor—which indefatigably recollected the failures of U.S. exceptionalism vis-à-vis systemic racism, state-sanctioned exclusion, and state-authorized discrimination—was part and parcel of late-1960s student calls to “make education relevant” via the strategic inclusion of these histories in university curricula. The history of Asian migration and Asian Americans—particularly when situated adjacent to recent events involving nation-specific travel bans, talk of Muslim registries, and resurgent nativism – is accordingly relevant, a topic of conversation that can shed light on the current state of our nation and the minority experience.

Correspondingly, an exploration of Asian American writing reveals how the experiences of Asian Americans remain relevant and urgent. From nineteenth-century anti-Chinese immigration exclusion to the forced incarceration of Japanese Americans during World War II, from domestic immigration politics to U.S. war-making in Asia, the constantly evolving notion of “Asian America” accentuates, by way of a vexed racial past, the relevance of these legacies in the present. Returning to Judge Robart’s provocative response to the aforementioned executive order, it is this desire to return to “facts” that is at the forefront of Asian American studies. A cultural and national memory of immigration laws, presidential orders, firsthand accounts, and cultural representations offers Americans of all stripes an opportunity to review where we have been as a nation in order to map where we are headed.

Cathy J. Schlund-Vials is professor of English and Asian American studies at the University of Connecticut. 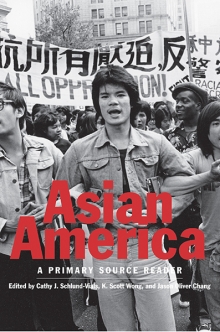