Most of what Western readers know about Islamic political thought pertains to institutions such as the caliphate and sultanate or to the role of Islamic law in the construction of an Islamic society and polity. But if we examine texts that are older than our daily newspapers, we can peer through a window into a flourishing early modern Islamic world. Translated into a Western language for the first time, Advice for Callow Jurists and Gullible Mendicants on Befriending Emirs presents a Sufi understanding of the role of politics and political etiquette as practiced in Ottoman Egypt in the sixteenth century. The author’s theoretical approach to government is largely implicit, as he focuses on the proper conduct of a Sufi spiritual adviser towards his politically important friend, and vice versa.

The author, ‘Abd al-Wahhāb ibn Aḥmad ibn ‘Alī al-Sha‘rānī (1493-1565), was one of the most prolific and widely-read writers of the early modern Middle East. He authored dozens of works on Sufi theology and practice, hagiography, and Islamic law, among other topics. The thousands of surviving manuscripts of his works are spread throughout the Islamic world. He continues to be one of the influential Sufi authors in contemporary Egypt, so his works are of more than historical interest.

One of the appealing aspects of his writing is that while al-Sha‘rānī was highly conversant with the cosmopolitan high culture of the Muslim world written in classical Arabic, he was also heavily influenced by the local culture of Ottoman Cairo and his familial roots in the rural world of the Nile Delta. His works are full of references to popular culture and religious practice, as well as to the experiences of common people. In particular, he often articulated the complaints of peasants and artisans about the behavior of the wealthy and powerful.

This combination of high learning and a familiarity with the experiences of common people is also reflected in his language. He writes in a simplified form of classical Arabic, accented with the use of colloquial terms and expressions, some of which are recognizable from modern Cairene dialect. The sixteenth century was a time when a number of writers used colloquial dialect and poetry to represent the experiences of the common people during the period of the Ottoman conquest of Egypt and the establishment of Ottoman rule. One such figure is the chronicler Ibn Iyās (1447-circa 1522), who wrote the most detailed narrative of the Ottoman conquest. His writing also reflects this shift to give greater voice to the lower classes and to the popular culture of ordinary Egyptians. The use of colloquial Arabic, generally rejected by medieval Muslim authors as a sign of coarseness, became more common, although not to the degree one finds in some eighteenth-century chroniclers who wrote entire works in the colloquial dialects of Egypt and Syria.

Al-Sha‘rānī’s use of colloquial phrasing and expressions in a purportedly classical Arabic text presents a number of problems for the translator. How does one represent these different registers of language, especially when the classical text sometimes transposes a colloquial expression into classical vocabulary and phrasing? There is no easy answer, but to the extent possible, I have attempted to replicate these sometimes abrupt shifts between formality and informality in the translation. This sort of language may sound strange coming from an educated religious scholar famous for his piety and political influence, but it is precisely this manner of addressing varied audiences in familiar language that made al-Sha‘rānī such an beloved figure in his own day and contributes to his enduring popularity as a religious teacher and moralist.

Adam Sabra is professor of history and King Abdul Aziz Ibn Saud Chair in Islamic Studies at the University of California, Santa Barbara. He lives in Goleta, CA. 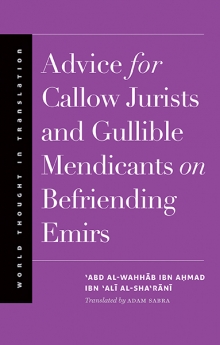