You needn’t be a birder to recognize an owl. The round face and large, forward-facing eyes immediately distinguish it from any other bird. And it is arguably this face—with its superficially human expressions—that explains why owls have maintained such a hold on our imaginations. It has led us to personify the owl with such qualities as wisdom, anger and suspicion, cementing its position in Western folklore and mythology, from Beatrix Potter to Harry Potter.

Looking beyond the mythology, however, owls are simply nocturnal birds of prey whose unusual appearance reflects a suite of remarkable adaptations to a challenging lifestyle. And the face reveals just how the owl tackles these challenges.

The first thing you will notice about an owl’s face are its eyes. Some 69% of the world’s 240-odd species of owl operate primarily in twilight or after dark, locating and capturing prey in conditions of limited to zero visibility. It is thus hardly surprising that their eyes are among the largest proportionally of any animal—up to 2.2 times the size of similar birds’ and, in the largest species (such as the Eurasian Eagle Owl), larger even than our own.

Owls’ eyes are more tubular than spherical. This shape increases the surface area of the retina, which is packed with the rods that allow the acute low-light sensitivity required to operate in near darkness. Being forward-facing, the eyes also provide the binocular vision essential for depth perception when targeting prey. You will often see an owl bob and weave its head to improve its focus. However, you will not see it turn its eyes, as the eyes are locked into their sockets. Instead, owls have evolved the celebrated ability to turn their heads by up to 270 degrees in order to view objects around and behind them.

Less obvious than an owl’s eyes are its ears. Contrary to popular belief, these are not those feathered tufts on top of the head—a camouflage adaptation in some species—but vertical openings on either side, concealed by feathers. An owl’s hearing is even more impressive than its eyesight and benefits from several unusual adaptations. The most visible distinction is the facial disc, the circular arrangement of feathers bordered by a raised rim, which forms a concave saucer around each eye and gives an owl its distinctive facial shape. The facial disc works like a satellite dish, capturing sound and directing it to the ears. The ear openings themselves are proportionally the largest of any bird and (unusually among vertebrates) are positioned asymmetrically, with one higher than the other. This produces a delay in the auditory signals reaching an owl in both the vertical and the horizontal plane, giving the bird an exceptional ability to pinpoint the direction of a sound. The hearing of a Barn Owl is at least ten times more powerful than ours; laboratory experiments have proven that it can capture prey in pitch darkness by sound alone.

Most owls hunt either by swooping down from a perch upon unsuspecting prey or by flying slowly over open ground and dropping upon anything that they detect below. Either way, it is essential that they conceal their approach. And this challenge has given rise to a third unusual adaptation: the flight feathers of most owls have unique sound-proofing modifications—fine feather filaments that dampen onrushing air and a downy surface layer that absorbs high-frequency sound —enabling them to flap noiselessly as they approach prey. Other practical adaptations in owl plumage include legs feathered down to the toes, which protects them both from the bites of their prey and from the extremes of the cold climate in which some species hunt. Fine hair-like feathers around the bill, called filo-plumes, also provide extra tactile sensitivity in tackling prey.

And, if it is the exception that proves the rule, then it is instructive to look at the fishing owls of Africa and Asia. These unusual owls prey almost entirely on fish, which they detect largely by sight, not sound. Thus fishing owls have no need for the facial disk and soundproofing plumage of other species, and evolution has allowed them to dispense with these features.

Finally, owls dispatch their victims using a weaponry that is every bit as lethal as any diurnal raptor’s. Mostly concealed behind a spray of fine feathers, the bill has a sharply hooked tip that serves both to kill prey with a bite and to tear it into pieces. It is set a little below eye level, and tilted downwards to avoid impeding the binocular vision. The talons have long, needle-sharp claws, which seize, crush and kill prey, providing a vice-like grip while the bill gets to work. Larger owls have frighteningly powerful feet: the talons of a Great Horned Owl may exert a pressure upwards of 300 pounds per square inch—around the same as the bite of a Rottweiler and at least eight times stronger than the grip of a human hand.

So while there may be nothing supernatural about owls, it is unsurprising that their ability to work under cover of darkness has long filled people with wonder and, in some cultures, fear. Pioneering British wildlife photographer Eric Hosking would have been first to confirm that you underestimate these birds at your peril: Hosking lost an eye when attacked in the darkness by a female Tawny Owl whose nest site he was trying to photograph. His autobiography, fittingly, is called “An Eye for a Bird.”

Mike Unwin is an award-winning author of numerous books and articles on natural history and travel. The British Guild of Travel Writers named him UK Travel Writer of the Year in 2013. He lives in Brighton, UK. 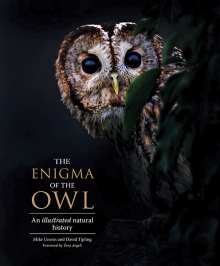