Donald Trump’s election and the first weeks of his presidency show us some of the ways in which the Constitution matters. When trying to understand how our constitutional system works, I like to identify three “parts” of the Constitution: rights, structures, and conventions.

It’s easiest to focus our attention on the “rights” part, as shown by the immediate response to President Trump’s executive order regarding immigration to the United States (from his point of view, “temporary suspension of admission of people from seven nations”; from almost everyone else’s, the “Muslim ban”). People immediately focused on the ways in which the executive order was said to violate constitutional rights: by discriminating on the basis of religion or national origin, by impinging on rights to procedural fair treatment, and more. And there’s little doubt that future actions by the Trump administration will generate claims—contested, of course—that the actions violate constitutionally guaranteed rights.

But in many ways, the Constitution’s structure is more important than what it says about rights. One point is so obvious that it’s easy to overlook. Donald Trump is in the position to take whatever actions he chooses because the Constitution doesn’t create a system in which the winner of the popular vote becomes President. By winning narrow victories in Pennsylvania, Michigan, and Wisconsin, Trump won the presidency despite the fact that Hillary Clinton got nearly three million more votes than he did. That’s a result of structure—the electoral college, rather than a nationwide popular vote, determines the winner of an election.

Another structural feature is the oft-praised separation of powers system. What we’ve learned over the past two centuries is that whether that system operates effectively depends to a great extent upon how our parties are organized. The hopeful theory of separation of powers is that as each branch asserts itself against the others, compromises will be reached, yielding good public policies that don’t threaten our rights. Historically, the rise of political parties challenged that theory, because it meant that the members of the President’s party who might control the Senate would go along with rather than fight against the President. Unified party government with one party controlling the presidency and both houses of Congress might then present a real problem.

We’ve had unified party government in the past—for a long stretch in the twentieth century—without running up against problems with the separation of powers system. This is because the parties were not united fronts. They were complicated coalitions—economically liberal but socially conservative Southern Democrats, Northern Democrats who were liberal across the board, internationalist Republicans who were economic conservatives, socially and economically conservative Republicans. The actual coalitions that mattered were comprised of people drawn from both parties, and they varied depending on the issue at hand. In recent years, the parties have become ideologically homogeneous: there really aren’t any liberal Republicans any more, nor are there any really conservative Democrats. Additionally, the growing polarization of the parties makes the separation-of-powers story rather less hopeful than it was in the past.

The reasons why parties aren’t coalitions any more, and the reasons for ideological polarization, aren’t entirely clear. Partisan gerrymandering plays some role, though the fact that we see the same things happening in the Senate—which can’t be gerrymandered—that we do in the House suggests that something else is going on. Some scholars suggest that “partisan sorting” is going on—people choose to live near people who agree with them. That sorting can have important effects because of another structural feature of our system, this one created by a statute that’s essentially unamendable. We elect our Senators and Representatives by what political scientists call a “first past the post” system, one in which the person who gets more votes than any other candidate wins the election. Such systems drive in the direction of a division between only two parties. Importantly in this setting, if your party has even a small majority in your district, the votes cast for the other party’s candidate essentially count for nothing. If partisan sorting occurs, you’re probably going to find more and more districts permanently red or permanently blue. And that is exactly what we are seeing.

Another structural feature is that “policies make politics.” Parties controlling the legislative agenda try to enact policies that will strengthen their coalitions and weaken their opponents: Republicans adopt voter identification laws and laws that make it more difficult for unions to organize workers; Democrats propose campaign finance laws that would reduce the ability of exceptionally wealthy people to finance candidates, and try to strengthen union organizing efforts.

Finally, there are conventions—norms of political behavior that are taken for granted even though they aren’t enforceable as “law.” Donald Trump’s candidacy was most striking, from a constitutionalist’s point of view, for its willingness to challenge long-standing conventions—sometimes saying that the conventions no longer made sense, sometimes simply because the conventions might have impeded his political campaign. But pressure on conventions has been building for several decades.

One convention, for example, is—or was—that members of the party that had lost the Presidency cut the President some slack as he pursued his policy agenda. They refrained from using all the obstructionist legislative tools that were, formally, available to them, for example. Another convention was that “politics stopped at the water’s edge”—that is, politicians who opposed the President within the United States would not try to undermine his foreign policy by direct contacts with political leaders elsewhere. A third was that, except in extremely close elections, those who lost the popular vote accepted the outcome. And a fourth was that politicians could, and did, criticize specific court decisions as wrong and deserving of modification or overruling, but should refrain from attacking the individual judges who made those decisions.

The point of these examples should be clear—each of the conventions has come under pressure, perhaps to the point of disappearing. Conventions aren’t law, and they can and do change, mostly when people start behaving differently. There’s nothing sacrosanct about the particular conventions that happen to be in place at any specific time. But what conventions do is help define the contours of the constitutional order we have.

It’s up to us to decide whether we like what old conventions gave us, or what repudiating them might portend. 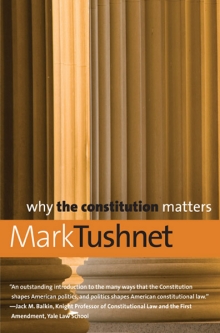