Caricatured as unthinking, single-minded fanatics who caused a “needless war,” abolitionists are often compared unfavorably to political moderates and compromise-minded statesmen. Their resurrection as freedom fighters during the modern civil rights era has been relatively brief. It is often dismissed as neoabolitionist history. While a bland celebration of the abolitionist movement with its radical edges shorn off inhabits popular culture, the dominant picture of abolitionists in American history is that of bourgeois reformers burdened by racial paternalism and economic conservatism. Neither the scholarly nor the lay consensus on abolition does justice to the movement’s rich, diverse, and contentious history.

Slave resistance, not bourgeois liberalism, lay at the heart of the abolition movement. Slave rebellions paralleled isolated criticisms of slavery in colonial America. The enslaved inspired the formation of the first Quaker-dominated abolition and manumission societies as well as the first landmark cases that inaugurated emancipation in the Western world. The actions of slave rebels and runaways, black writers and community leaders, did not lie outside of but shaped abolition and its goals. As most abolitionists understood, the story of abolition must begin with the struggles of the enslaved. The connection between slave resistance and abolition in the United States was proximate and continuous. Prominent slave revolts marked the turn toward immediate abolition. Fugitive slaves united all factions of the movement and led abolitionists to justify revolutionary resistance to slavery. Recent historians have declared black resistance to enslavement passé, but it was central to abolition. Not restricted to wartime emancipation, the American abolitionist moment unfolded in a hundred-year drama in law, politics, literature, and on-the-ground activism. To reduce emancipation to an event precipitated by military crisis is to miss that long history.

The history of abolition is an integrated story even though it is usually not told in that manner. Black abolitionists were integral to the broader, interracial milieu of the movement. To read them out of the abolition movement is to profoundly miss the part they played in defining traditions of American democratic radicalism. The insidious divide between white thought and black activism that pervades some books on abolition is both racialist and inaccurate. There was no such racial division of political labor in the abolition movement. Early African American literature, black abolitionists’ intellectual response to the pseudo science of race, and debates over citizenship and emigration performed the work of political protest. The theoretical sophistication of black abolitionist thought should finally put to rest the influential yet glib view of it as imitative, mired in the strictures of middle-class reform and elitism, and divorced from the plight of southern slaves and northern masses. Black and white abolitionists also went beyond a simple appeal to the American republican tradition that sought to include African Americans in its promise. They generated a powerful critique of the slaveholding Republic and constructed a counternarrative that highlighted its origins in the slave trade and slavery.

The alternative nature of abolitionism is showcased by its diverse membership, which gave rise to cooperation as well as to creative conflict across rigid lines of race, class, and gender that characterized early American society. The abolition movement, in which the disfranchised, including women, played a seminal role, was driven by passionate outsiders. Women were abolition’s foot soldiers and, more controversially, its leaders and orators. In birthing the first women’s rights movement, abolition again revealed its radical face. The abolition movement married the black struggle against slavery to progressive white evangelicalism and to the iconoclasm of more secular reformers. Its steady radicalization on women’s rights, organized religion, politics, and direct action made it quickly outgrow the empire of religious benevolence and moral reform.

Abolition was a radical, democratic movement that questioned the enslavement of labor. The best works on abolition have tried to understand it by overturning simplistic social control models that emphasized social and ideological conformity to legitimize an emerging capitalist economy. Scholars have long known that modern racial slavery fostered the growth of early capitalism. If slavery is capitalism, as the currently fashionable historical interpretation has it, the movement to abolish it is, at the very least, its obverse. The history of capitalism illustrates that it has rarely marched in lockstep with democracy. The fraught relationship between capitalism and democracy is characterized more by contestation. Modern racial slavery was a monstrous hybrid that combined the horrors of an archaic labor system with the rapacious efficiencies of capitalism. Like the slave system they opposed, abolitionists were hybrids, old-fashioned moralizers as well as modern exponents of human rights. It is no coincidence that the brief, incomplete triumph of the abolitionist vision resulted in the greatest expansion of American democracy, and that the demise of abolition went hand in hand with the greatest contraction of democracy. At the heart of that movement lay the slave’s struggle for freedom and human dignity.

From The Slave’s Cause by Manisha Sinha, published by Yale University Press in 2015. Reproduced by permission.

Manisha Sinha is Draper Chair in American History at the University of Connecticut, and is the recipient of fellowships from the National Endowment for the Humanities among several others. 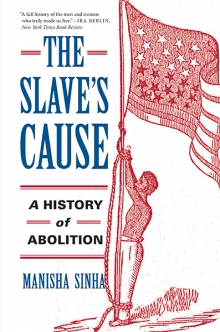