“American exceptionalism,” a term that is currently making the rounds among journalists, denotes those features of American self-understanding that distinguish it from other modern societies, especially European nation-states. Most of the features of note are characteristics familiar to most Americans with some sense of our history and the history of Europe since the Industrial Revolution. Chief among these is the notion of democracy born of a revolution against monarchy, not driven by an alternative vision of society (as was the case in the European revolutions). The purpose of the American Revolution was to give the people and their colonies freedom for their own pursuits without any control by the king in England and only minimal control by the other colonies in America. It was this kind of freedom that marked America as the “land of the free.”

The government that was created was a federation of the thirteen colonies united on the basis of a Declaration of Independence that said, “We hold these truths to be self-evident, that all Men are created equal, that they are endowed by their Creator with certain unalienable Rights, that among these are Life, Liberty, and the Pursuit of Happiness.” Unlike revolutions in Europe, the American Revolution was not driven by the vision of a social democracy. It was rather the value of personal freedom to pursue the practical projects called for by living in America as a “new land.” For the first one hundred years, the energies of the people were eagerly devoted to such practical projects.

Then the Civil War divided the states over the issue of slavery. Slavery was the result of the European (largely British) trade in Africans and other “third world” peoples to provide its industries and colonists with cheap labor. Its economic value for America was located primarily in the Southern plantations, but in the 1850s and 1860s, it came into the fore as a moral and political issue. The emancipation of slaves was a very significant historic moment, but it did not result in any claim to exceptional virtue or honor for America. On the contrary, the resentment of the losers has been cultivated for over one hundred years and translated into the current political culture “wars” and the political deadlocks in Washington and the conservative states. These “wars” can be seen as a kind of negative exceptionalism.

America’s involvement in the Second World War turned the tide toward American exceptionalism in a positive sense. The flourishing of industry and the post-war involvement in world affairs eventually gave rise to a rather short list of descriptions intended to define America’s place and ranking among the nations as exceptional. Noted characteristics are America’s financial strength and military superiority, its role as benefactor in the provision of aid to other nations (such as the Marshall Plan), its leadership in the organizations of the Western nations (such as NATO, the European Union, and the United Nations), and its many missions throughout the world in the promotion and defense of “democracy.” All these activities—and their driving assumption of American exceptionalism—were seen to be the “natural” results of our winning the Second World War. Doyle McManus summarizes this sense of exceptionalism as “a special responsibility to exert global leadership…promote democracy and human rights around the world…[and] lead by building strong alliances, usually with other democracies.”

The media has never felt the need to analyze public events, attitudes, and ideologies by tracing their intellectual supports back to their historical moments of origin, or even to account for them as significant illustrations of the big picture of American society as a whole. I therefore find the growth of the conversation surrounding American exceptionalism intriguing, and I see many ties between this conversation and the conversation surrounding the fall of Christendom and the advent of a secular age.

As the study of the Western Christian tradition approached its ending in the United States, it became a cultural critique of the current situation in America, one that bears a remarkable similarity to the present discourse in American exceptionalism. The social logic of the Christian myth provides the narrative symbols for Christian society as exceptional. The society has the shape of a hierarchy, reveres absolute power at its peak in order to guarantee order, and assumes an emphasis on righteousness as the answer to evil. I would therefore like to suggest that a certain strand of Christianity be added to the growing list of features of American exceptionalism. A subtle outline of this myth of Christian prosperity has been there, for instance, in the White Papers on the “American Century” produced by Wolfowitz, Cheney, Rove, Rumsfeld, and others during the early years of the Second Bush’s Administration and in the Tea Party’s reasons for a conservative Republican government.

Now the emphasis of the Trump administration is power, wealth, defense, and nuclear weapons. In reference to these features of American exceptionalism, Doyle McManus notes that “Donald Trump has abandoned…those, and in their place has revived an old slogan of self-interest, ‘America First.’ That could lead to disaster.” It does seem that Trump’s stated objective is the dismantling of the entire structure of the social institutions put in place by the Democrats since FDR. Some commentators are saying that Trump’s “Great Again” is a reversal of the original chapter of American exceptionalism. Thus it is not easy to discern the influence of the Christian myth in this history of political ideology because it resides at an unconscious level of conservative cultural mentality, a mentality that has tarnished Christian and Democratic concepts by weaponizing them. It is also because the express public forms of Christianity have lost their obvious places in the patterns of practices and thinking of the populous.

Additionally, in the course of the history of industry, capitalism has overcome and overwhelmed the Christian myth and mentality to become a new myth and mentality that provides the social logic for the Western nation-states. But the Christian myth still shines through at the levels of identity, behavior, and thinking, as all traditional mentalities do. When the white supremacist Richard Spencer said, “At the end of the day, America belongs to the white men”; when Steve Bannon traveled to the Vatican, and when Donald Trump promised to “Make America Great Again” by “repealing and replacing” the entire set of federal institutions in support of human welfare and well-being since FDR, what Thomas Edsall called the “peculiar populism of Donald Trump” is now a matter of public knowledge.

Consternation reigns, as it should. Both the Christian myth (with its logic of absolute power and its division of the human race into Christian and heathen) and the myth of capitalism (with its reduction of all values to success in the accumulation of wealth) combine and conspire against the concept of a multicultural social democracy and the range of human values now required to encourage social cohesion and cross border negotion in our global age. No wonder the people are demonstrating and the women are marching. No wonder the rest of the world is looking for new leadership. Let us hope that the freedom for them to do this is not simply the leftovers from a past American exceptionalism, but a sign of the human energies projecting a democratic future for the world.

Burton L. Mack is Wesley Professor of Early Christianity at Claremont School of Theology. Pioneering the study of Christian origins, his nine books include The Lost Gospel. He lives in Claremont, CA. 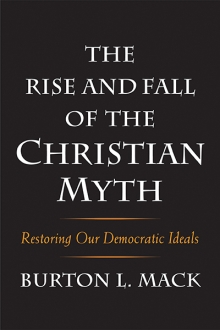