Are wars the result of accidents, compounded by misassessments, misunderstandings, and miscalculations? If this is true, there is no one to blame; according to this view, wars simply happen. But perhaps wars are born out of meticulous and willful planning by individuals and institutions that might benefit from war. If this is the case, there is plenty of blame to go around. The stakes in this kind of debate—accident vs. design—are remarkable. Historians and political scientists have been at it for decades because therein lays an answer to age-old questions: What causes wars and why do they start? In essence, the history of any war is an attempt to provide an answer. The 1967 June war in the Middle East—also known as the Six Day War—is no exception.

Like World War I, the June 1967 war was preceded by a month-long crisis in which soldiers of the two camps found themselves staring at each other across a tense border. The crisis erupted on May 14th, when Egyptian President Gamal Abd al-Nasser mobilized the largest army in the Middle East and ordered it to move east into the Sinai Desert. The vast, arid peninsula had lain free of soldiers for about a decade, thanks to an informal agreement between Israel and Egypt. Nasser was thus the first to change the regional status quo, claiming that he was merely acting to protect an ally. On May 13th, according to Nasser, he received information from several sources, including the Soviet secret services, that Israel was about to attack Syria, Egypt’s military ally.

To deter Israel, Nasser advanced his troops to the border to signal that if Israel invaded Syria, it would face war on two fronts. In response, Israel mobilized its troops, and other Arab countries, fearing a confrontation, did the same. On May 22nd, Nasser raised the stakes by closing the Straits of Tiran, thus blocking the Gulf of Aqaba to Israeli navigation. As if this was not enough, on May 30th, Egypt signed a defense pact with Jordan. The agreement put the Jordanian army under Egyptian command and permitted Iraqi troops to cross the border into Jordan and take positions near the front. In previous years, Israeli officials had publically declared that the very steps Egypt had taken in merely two weeks—deployment of army units in Sinai, the closing of the Titan Straits, and the entrance of another Arab army into Jordan—were lines in the sand not to be crossed. Five days later, Israel launched its offensive.

The third Arab-Israeli war, following the two earlier rounds (the war for Palestine in 1948 and the Suez War in 1956) was a rather brief affair. It lasted only six days, but its fate was decided in an even shorter time. During the first three hours of the first day, Israeli aircraft wiped out the entire air forces of Egypt, Syria, Jordan and Iraq. From that point onwards, Arab armies had to operate without air cover, totally exposed to incessant bombardment by the Israeli air force. Between June 5th and 10th, the Israeli Defense Forces changed the map of the modern Middle East by capturing the Sinai Peninsula, the West Bank, and the Golan Heights. All in all, Israel post-June 1967 had tripled in size.

Fifty years after it had ended, the Six Day War continues to affect the Middle East. It brought about the downfall of Arab nationalism (and the concomitant rise of radical Islam), the oil crisis of the 1970s, and the interminable conflict between Jews and Palestinians.

Traditionally, historians have described the process that led to the crisis and subsequent war as inadvertent, one that emanated from regional settings. Gamal Abd al-Nasser’s information regarding Israel’s intentions was faulty. He did not realize how threatened the Israelis felt by the steps he had taken. And the Israelis failed to see that Nasser was merely bluffing. However, with the passing of time, new interpretations are surfacing up. These emphasize intentionality, long-term processes and the global context in which the war occurred. For in the decade that preceded the Six Day War, Israeli, Egyptian and Syrian generals lobbied for policies that increased Middle Eastern tensions and made war more likely.

The civilian leadership in all of those countries could have restrained their generals, had it not been thoroughly discredited by simultaneous economic crises. The sources of this economic slowdown were global and other developing countries were affected similarly. The 1960s saw an increase in the number of military coups and regional wars in Asia, Africa, and Latin America. Moreover, superpower involvement in the Middle East added fuel to the fire. The Americans and the Soviets sold weapons and made promises in a way that emboldened Arab and Israeli generals. Trigger-happy generals, weak civilian leaders and intrusive great powers created a powder keg. Nasser’s error of judgment in May 1967 was just the spark.

Are wars the result of design or accident? Sometimes, as in the case of the 1967 war, they are design and accident, regional circumstances, and global conditions.

Guy Laron is a senior lecturer in international relations, Hebrew University of Jerusalem, and has been a visiting scholar at the University of Maryland, Northwestern University, and Oxford. He is the author of Origins of the Suez Crisis and lives in Tel Aviv, Israel. 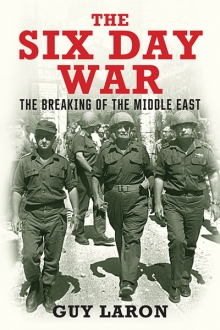