It is, of course, notoriously difficult to say anything novel, or even arrestingly interesting, about Shakespeare. In fact, I never intended to write a book about Shakespeare at all. But I fell into a set of questions and interests that resulted in a book, if not simply by accident, then at least while intending to do something else. The question was this: how did Shakespeare’s contemporaries conceive of, react to, and talk about the succession question in late Elizabethan England?

At the time, I was frequenting performances of early modern plays, many of them history plays of one sort or another, and most of them by Shakespeare. I rapidly came to the realization that, by the late 1580s and early 1590s, precisely the same set of political events (culled from medieval English as well as Roman history) that were being used in Catholic tracts and various Protestant replies were also being reenacted on the popular stage. The tracts were using the history to discuss the current political conjuncture and to speculate about the course of English succession and religious politics, often in highly controversial and potentially treasonous ways. Why not read the plays against the tracts and the tracts against the plays? And then, why not read both against the political circumstances of the day?

Before long, it became obvious that an adequate political reading of the plays would involve an engagement with a whole range of other literary and theatrical issues. It is important to put Shakespeare’s history plays not merely in dialogue with the tract literature of the period, but also both with one another and with the existing repertoire of history plays, many of which Shakespeare was in the act of rewriting. In so doing, he was presenting his audience with alternative versions of already-well known (and often well-loved) narratives; conducting in public, before audiences of thousands, a series of arguments about both “history” and “politics.”

Central to an understanding of Shakespeare’s political strategy is the figure of the earl of Essex, and a series of linked concerns about the compatibility of a politics of popularity, of aristocratic virtue and military prowess, of monarchical legitimacy and service to the commonwealth; a potentially volatile combination of which modes made up the Essexian project to save the nation from the Spanish (popish) threat, and protect the (Protestant) succession. Plays such as Henry VI, King John, and Henry V represent stagings of political dilemmas and conjunctures, drawn from the history—past conjunctures in which many of the most pressing problems of the day, and the most prevalent means and modes of response, had also been in operation. The plays then offered Shakespeare ways to confront and think through the central issues and problems of contemporary politics, and Shakespeare proffered them to his first audiences as such.

At times, these plays could confront their audiences with positively dystopian accounts of how monarchical legitimacy could be lost through various combinations of female rule, foreign war, disputed succession, civil war, usurpation, and tyranny. Think here of the Henry VI plays or of Richard II or Richard III. Sometimes they provided relatively upbeat accounts of how such legitimacy, having been lost, might be regained and sustained. Sometimes, as in Titus Andronicus, they could place both modes in jarring juxtaposition. Sometimes they presented darker meditations on the limitations placed on political agents of even the greatest virtue—consider Caesar and Brutus, Hamlet, or even Hector and Achilles—by events, political conjunctures, and war-driven processes of moral decline and corruption.

At the most general level, these plays allow us to watch Shakespeare staging history and politics as a series of interactions between various political agents, each bent on imposing order on the palimpsest of events and contingencies with which they are confronted as they tried to realize their own ends, outwit their enemies, seize power, or establish order. In using history to think about the relationship between politics and religion, Shakespeare employs drama as a source of actionable political insight. In some of these plays, most notably Julius Caesar and Hamlet, but also Troilus and Cressida, he does so at quite remarkable levels of self-consciousness and self-reflection.

In short, the emotional and intellectual energies that continue to course through Shakespearean texts stem in large part from the very intensity of Shakespeare’s concern with the particular threats and possibilities of the 1590s. This is as true of a “tragedy” like Hamlet or a “Roman” play like Julius Caesar as it is of English history plays such as Henry V or Richard III. Using history to stage and discuss intensely contemporary concerns at a time when direct discussion of those concerns remained fraught with danger ensured that, however intense their interest in contemporary issues and persons, the plays never became mere political commentary.

Just as these plays left it up to their first audiences to work out what they “meant,” by applying the materials and positions mobilized therein to their own experience and concerns, they do the same to modern audiences, directors, and critics. While a modern audience might not know the earl of Essex from a hole in the ground, I would argue that the ambiguities and oppositions, the interpretative and political choices, produced by Shakespeare’s extended meditations on the Essexian project, its tensions, antinomies and consequences, helped to produce the multilayered and intensely open-ended accounts of both “history” and “politics” with which these plays confront us today.

Peter Lake is university distinguished professor of history, professor of the history of Christianity, and Martha Rivers Ingram Chair of History at Vanderbilt University. He divides his time between Nashville, TN, and London. 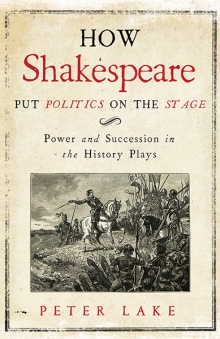