The first weeks of the Trump presidency demonstrate that the federal judiciary must be available as an essential check to enforce the Constitution. Already many lawsuits have been filed against President Trump and his administration, such as for violating the “emoluments clauses” of the Constitution, for the travel ban, for threatening to withhold funds from sanctuary cities, and for detaining immigration authorities detaining individuals even though they have work permits and deferred deportation status.

Long ago, in Marbury v. Madison (1803), the Supreme Court explained that the Constitution exists to limit government power and the limits within it have meaning only if they can be enforced. The Court held that this requires that the federal courts be able to remedy constitutional violations, including against the President. One of the most basic aspects of the rule of law is that no one, not even the President, is above the law.

Yet, for the last several decades, the Supreme Court has created significant restrictions on the ability of federal courts to hear constitutional claims and provide remedies to those whose rights have been violated. The Court has closed the courthouse doors, including to those who have suffered great harms. Many of these restrictions might make it more difficult to stop and remedy constitutional violations by the Trump administration.

For example, the Supreme Court has consistently expanded the immunity that government and government officials have to suit. The United States government has sovereign immunity and cannot be sued except when Congress has passed a law specifically authorizing it. The Supreme Court has held that all government officials when sued for money damages are protected either by absolute immunity – which means that they cannot be sued at all – or by qualified immunity. The latter means that the officer can be held liable only if he or she violates clearly established law that every reasonable officer would know and if the right is established beyond dispute.

The Court has concluded that the President of the United States has absolute immunity to civil suits for money damages for anything done while in office. This means that President Trump never can be sued for money damages no matter how much his orders inflict injury and violate people’s rights. At the same time, the Court has expanded qualified immunity for many other government officials, especially making it very difficult to sue law enforcement officials if they use excessive force or otherwise violate the Constitution. This will make it very difficult to hold officers from Immigration and Customs Enforcement liable when they act unconstitutionally.

Also, the Supreme Court has consistently restricted who has standing to sue in federal courts. One aspect of this is that the Court has held that no one has standing to sue when there is a “generalized grievance,” an injury suffered by everyone or nearly everyone. For instance, the Court has ruled that no one had standing to sue when President George W. Bush used federal funds to help faith-based organizations in alleged violation of the Constitution’s prohibiting the government from taking any action respecting the establishment of religion. The Court also has said that some constitutional violations cannot be adjudicated because they are “political questions,” left to the other branches of government to resolve. In two cases, in 2004 and 2006, the Court ruled that challenges to partisan gerrymandering were non-justiciable political questions. These restrictions on federal court jurisdiction will make it harder, and perhaps sometimes impossible, to challenge alleged unconstitutional actions by the Trump administration.

Another way that the courthouse doors have been closed has been to those bringing habeas corpus petitions and claiming to be held in violation of the Constitution and laws of the United States. Habeas corpus was referred to in England as “the Great Writ,” because it was the vehicle for a court to provide relief to a person who was illegally detained or imprisoned. The Constitution says that Congress cannot suspend the writ of habeas corpus except in times of rebellion or invasion. But a federal statute, “The Antiterrorism and Effective Death Penalty Act” of 1996, and numerous Supreme Court decisions have drastically reduced the availability of habeas corpus. I worry that individuals could be wrongly detained, but have no remedy.

These are just some of the ways that the Supreme Court and Congress have closed the courthouse doors to those who have been injured. The first weeks of the Trump presidency show that now, perhaps more than ever, we will need the federal courts to be available to protect our rights, enforce the Constitution, and provide checks on abuses of power. I fear, though, that at times this will be very difficult because of the ways in which the courthouse doors have been closed.

Erwin Chemerinsky is the founding dean and distinguished professor of law and Raymond Pryke Professor of First Amendment Law at the University of California, Irvine School of Law, with a joint appointment in political science. He lives in Irvine, CA. 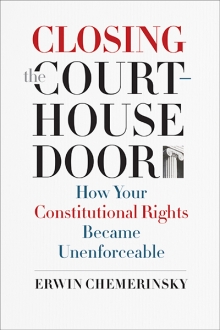