As many who are attentive to art world goings-on are aware, collectors Frank and Michelle Hevrdejs recently promised to the Museum of Fine Arts, Houston, a trove of spectacular still lifes by American artists; the works span the years from 1817 to 2012.  A book on the collection, Two Centuries of American Still-Life Painting: The Frank and Michelle Hevrdejs Collection, published last month by the Museum of Fine Arts, Houston and distributed by Yale University Press, showcases the stunning works and offers an opportunity for William H. Gerdts, art historian, Professor Emeritus of Art History at the CUNY Graduate Center, and renowned expert on  American still-life painting, to bring his towering insight and intellect to bear on the works featured here.  I recently enjoyed the great pleasure of speaking with Professor Gerdts about the book and Mr. and Mrs. Hevrdejs’s collection. 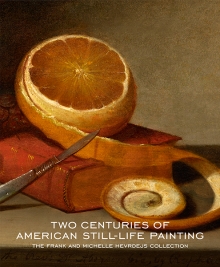 Professor Gerdts briefly discussed the nascent years of American still-life painting in the 19th century, at which time still life found itself at the very bottom of the hierarchy of genres.  Which is not to say – he was quick to point out – that American painters of the time didn’t create still lifes – indeed, many loved painting still life and did so enthusiastically, selling the works whenever they were able to, usually as decoration. The Hevrdejs collection includes numerous examples from the 19th century that attest to these early accomplishments, including Raphaelle Peale’s Orange and Book (c. 1817); James Peale’s Still Life with Fruit (possibly 1824); and George Cochran Lambdin’s Cyclamen (c. 1880), among others.  Early 19th-century artists, Professor Gerdts explained, created still lifes that emulated European painting, which the American artists had occasional – though infrequent – opportunity to see.  The idea of Americanness in still life became established later, with the introduction of Modernism.

Professor Gerdts described the transition in the Hevrdejs’s collection into 20th-  and 21st-century works as being exciting both for the collectors, who have a keen interest in the variations in accuracy of form and distortion of form (the latter being a hallmark of the more modern works) and for himself, for whom this represented a first opportunity to write on very late 20th century and early 21st century still life. He credits his work on this project with inspiring in him a new level of engagement with contemporary artists of a certain, representational, kind.  Professor Gerdts had the chance to talk to a number of the living artists whose work is included in the book.  Among the most recent paintings included is Autumn Still Life (2012) by Bill Scott; in a phone call, Professor Gerdts was able to ask the painter himself for an explanation of why the painting is, indeed, a still life at all.  As the painter went on to explain, he arrived at his studio one day to paint a picture…  in the center of Autumn Still Life, the work that came out of that trip to the studio, is the outline of a bottle – which was sitting in his studio that day.  He also had some branches in his studio at that time, which became the thick, dark lines that appear throughout the painting.  And the patch of blue in the upper right corner of the painting… well, that’s the window in his studio.  As Professor Gerdts writes in the book, “As with the majority of still-life paintings, this work was created in the studio, and references to the studio contribute to the overall impact of the image, but that image is basically a field of diverse colors that appear in various geometric shapes, interspersed and overlapping. … The effect may thus be of a studio but not in a studio, since the only spatial reference is created by colors that advance or recede, overlapping colors, and linear elements.”

I asked Professor Gerdts whether any of the collection’s paintings from the time period he’s more familiar with yet held surprises for him.  He replied that seeing Walter Pach’s Progression No. 1 (Flowers) was interesting indeed; Pach is better known as a writer and a collector.  Professor Gerdts knew that he was also a painter, but hadn’t previously had the chance to see this work; as he writes in the book, “Walter Pach began studying under William Merritt Chase and Robert Henri. In Paris frequently between 1903 and 1913, he formed friendships with advanced artists in Europe, became a regular visitor at Gertrude and Leo Stein’s salon, and was instrumental in ensuring the inclusion of avant-garde artists in the famous Armory Show held in New York City in February of 1913.  Then, in 1913, he began to adopt Modernist aesthetics, beginning with his painting Progression No. 1 (Flowers).”

The painting by John Leslie Breck Still Life with Daffodils (1886), which was completed when the artist was only 28, inspired the realization that Breck was such a fine still-life painter so early in his career.  In the book, Professor Gerdts writes, “From the inscription it is clear that the work was painted in the spring of 1886 and was meant as an Easter present for his fiancée, Nellie Plummer, who lived in Auburndale, Massachusetts.  The single daffodil taken from the pitcher – it is too long to have merely fallen out – suggests a special token of his feelings for her.”

Professor Gerdts was delighted to see Harry Willson Watrous’s magnificent painting The Jar on display, as he feels Watrous’s still lifes have been overlooked.  “A still life it may be, but The Jar offers a considerable degree of drama.  The three Roman glass containers, each different in form, offer brilliant iridescence that is reflected on the tabletop on which they sit.  Watrous arranges them in a slightly off-kilter symmetry. … The earthenware jar, the antithesis of the Roman glass, appears anonymous and unreflective with a dark shadow at the right and with several cracks and with patches of the dark, remaining glaze revealing the tan earthenware. Elegant antiquity appears perfect; the utilitarian is cracked and disintegrating, yet looming large against the dark background.”

Seeing Jonas Lie’s Autumn Still Life was also a great pleasure, as only three or four of Lie’s still lifes are known, and this is a great one.  “In March and April 1920, forty-four paintings by Lie were on view at the Boston Art Club. Reviewing the show, a critic from the Boston Evening Transcript wrote that Lie’s still lifes ‘are so powerfully painted, and have such breadth of style and handling, that one feels they might have been painted by giants.’”

The exhibition that includes these works and much, much more is on view at the Museum of Fine Arts, Houston until April 9th.  If you won’t find yourself in Houston in the next few weeks, you’ll have the chance to catch it at the Memphis Brooks Museum of Art from April 20th until July 30th… or at the Tacoma Art Museum starting in October of this year.  And, of course, the beautifully illustrated book offers glorious illustrations of all of the works on view in Houston, as well as an illuminating text by the esteemed Professor Gerdts.