The fact that most states in the world have signed international treaties guaranteeing freedom of expression, and make such promises in their constitutions, does not answer the question: why should speech be free? As soon as we start trying to hold governments to their word, or debate the proper limits of free speech, we find ourselves reaching for arguments that either underpin or call into question the terms of such treaties, laws and policies. Even if your instinct, like mine, is to say, ‘but of course speech must be free!’ it is still important to spell out why.

The Western intellectual tradition has offered four main answers. Each comes with multiple philosophical, legal and literary variations, yet the basic thoughts are remarkably persistent. I call them in shorthand STGD: Self, Truth, Government, Diversity.

The first argument is that we need freedom of expression to realise our full individual humanity. The power of speech is what distinguishes us from other animals and, thus far, from computers. If we are prevented from exercising it freely, we cannot fully be ourselves. That includes revealing ourselves to others, insofar as we wish to. Strapped into a straitjacket with a hood over my head and lips taped shut, I may inwardly reflect ‘my thoughts are free; you can’t take that away from me’. Yet even that innermost freedom of thought cannot entirely be separated from the freedom of expression. As anyone who writes or speaks will know, often you discover what you really think only in the process of speaking or writing. ‘The thought is made in the mouth’, said the Dadaist Tristan Tzara.

Remember Syed Mahmood, spontaneously articulating to his home computer camera his reaction to the ‘Innocence of Muslims’ video I will know what I definitely want to argue in this book only when I have finished writing it and discussed the draft with friends and critics.

Moreover, even the most unbending liberal individualist must accept, as a description of lived reality, that I establish not just what I think but who I am through relations with other people. The Zulu proverb umuntu ngumuntu ngabantu, which roughly translates as ‘a person is a person through other persons’, is sometimes understood as an African communitarian rebuke to European individualism, but it can simply be taken as the description of a human universal. It is precisely because we are not what Jeremy Waldron calls ‘the self-made atoms of liberal fantasy’ that we need the liberal good of freedom of expression, in communication with others, so as to be fully ourselves.

I have been labouring to summarise this first answer in cold prose, but behind it is a truth that millions of people who have been denied freedom of expression know instinctively, feel passionately and articulate in ways such prose cannot capture. So, before proceeding a line further, please stop and listen on your box to Nina Simone’s rendition of a song called ‘I Wish I Knew How It Would Feel to Be Free’, originally written in 1963, at a time when black Americans were still fighting to achieve the equal freedom they had been promised by Abraham Lincoln a hundred years before. To Billy Taylor’s jazz melody, itself a musical embodiment of freedom of expression, Simone sings, in a contralto voice blending warmth and melancholy:

I wish I knew how

It would feel to be free

I wish I could break

All the chains holding me

I wish I could say

All the things that I should say

For the whole round world to hear

A little later come two lines as profound as they are simple:

I wish you could know

What it means to be me

Here is the most elemental argument for free speech.

Timothy Garton Ash is Isaiah Berlin Professorial Fellow at St. Antony’s College, University of Oxford; Senior Fellow at the Hoover Institution, Stanford University; and a regular contributor to the New York Review of Books. He is the winner of the 2017 Charlemagne Prize and has won the Orwell Prize for Journalism. 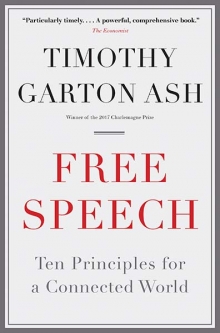