As you become a physician, you feel as if you are learning to see people as a compendium of parts and a source of income: parts and money.

No one pulls you aside during training and tells you this plainly.

Just the same, you learn, as I did in the first month of medical school when my very first patient died before I could ask her her name.

Before meeting her, I had not had personal contact with any real patients, just abstractions of patients. The first weeks of medical school were filled with a series of PowerPoint presentations. We watched as animated arrows flashed and the Krebs cycle generated energy, or molecules bound to receptors and cell membranes opened, like the locks of a canal, so that potassium and sodium ions could travel in and out of a cell. Professors discussed the body as a series of simple machines. As they spoke, we dozed in the darkened lecture hall. When the fluorescent lights flickered on, we rubbed our eyes, collected our backpacks, and stumbled upstairs to the anatomy lab, where we dissected the upper back of a corpse while avoiding its dead eyes.

After a few weeks of this, the medical school sent us away for weeklong apprenticeships in the practices of rural primary care physicians. We were going to see real patients! On the first Monday, I woke up early and put on my least-wrinkled shirt and an almost-matching tie. I covered these up with a short white poly-cotton-blend lab coat. In the mirror, I looked more like a busboy than a physician. To shore up my authority and clarify my role, I filled my pockets with medical tools—a penlight, reflex hammer, stethoscope, and tuning fork—that I did not know how to wield.

I arrived before the first patient, and the physician greeted me in his consultation room. He was young, but his office was old-fashioned, the walls dotted with diplomas and framed Norman Rockwell lithographs. His oversized wooden desk faced two leather chairs. As I sat before him, he said he liked having students. “It gives the patient someone to talk to while I am seeing the previous patient. You can sit and listen, while I keep moving. I have to move, move, move if I want the lights to stay on.” So we began, and I followed his rhythm. I would go in first, fumbling through the patient’s history and exam for a few minutes. Then the physician would enter while knocking, striding from the door to the patient’s back and placing his stethoscope under the shirt without invitation. “Take a deep breath. Good. And again.” While he lifted his stethoscope off the chest, he would advise more meds, or a new med, as he marked a billing code on the patient’s chart. With these codes he monetized every minute of his day. He later told me that if he spent ten minutes with a return patient, he generated a profit. If he spent twelve minutes, he broke even. If he spent fourteen minutes, he lost money. His profits de- pended on efficiently moving patients through the clinic.

That afternoon, in the midst of this bustle, the office phone rang. The adjacent hospital was calling. “A patient of your practice is coming to the hospital by ambulance. Can the physician come?” The physician had a double-booked morning, so he sent me instead. “It will be good for you to see how the Emergency Room works,” he said, and patted me out the door.

I was eager to see an acutely ill patient instead of the people with chronic diseases who filled his exam rooms. I ran across the park- ing lot, my tools dully rattling in my pockets. When I arrived, the Emergency Department was tensely quiet as the nurses prepared for the arrival of the patient. Then the paramedics arrived, pushing an aluminum gurney with an unconscious woman cradled between its rails. The lead paramedic announced his cargo: “Fifty-six-year-old woman. History of hypertension and diabetes. Collapsed at work twelve minutes ago. BP 50 over nothing. Pulse 52. ST elevations in V1–6.” As they spoke, they wheeled the unconscious woman to- ward ED-1, the largest bay in the Emergency Department, the bay where the tools to revive the most critically ill patients were arrayed.

The woman’s dress was cleaved open by sterilized scissors to bare her chest. A pair of physicians and a trio of nurses descended on her. Together they moved about her, announcing their actions to one another: “Cardiac monitor in place. IV access obtained. Labs drawn. Administer streptokinase.” Using their skills in concert, they localized the failing part: her heart.

The diagnosis was apparent to everyone in the room but the pa- tient and me. She was unconscious, and I was ignorant. I stood still, afraid that my movements would be disruptive, while the paramed- ics, nurses, and physicians worked. They spoke to one another in code: “STEMI. Unresponsive. Won’t make it for transfer to perc.” They worked together through a familiar algorithm, following a lifesaving script. Despite their coordination, the patient’s heart never regained its rhythm.

As the exhausted physicians and nurses left the room, they finally departed from the script. “Tombstoned. You ever seen that before?” one of them asked. “Broken pump. Too bad,” the other commented. The woman’s parts had failed her.

Nursing assistants moved in. They cleaned the woman’s body, removing the medical waste that littered her exposed thorax. I stood at the foot of the bed, uncertain what to do. I averted my eyes and noticed a stain on my new white coat.

As I looked for something with which to clean it, a nurse approached me and said, “Her son is in the waiting room, but the physicians are busy with another patient who just came in. Can you talk with the son and tell him what happened?”

Too afraid to say no, I mumbled, “Sure,” and then made a quick call to the physician’s office, seeking guidance about how to tell a son his mother was dead. The physician’s receptionist put me through to the clinic nurse. “The physician is busy seeing patients, so you will have to do it yourself,” she instructed. “It’s what physicians do.”

I wanted to do what physicians do. I entered the Family Waiting Room and asked for the “son of our emergency patient.” A young African American man about my age was standing in the middle of the room, rocking from side to side. He had been called from his work as a cook and was still wearing his own white coat. Through tears, he asked, “Where is my mother? What happened to her? Where is the doctor?” I stammered, realizing I did not even know his mother’s name. All I could do was repeat what I had heard. “Her heart failed her,” I said. “Her heart failed her. She died.” He let out a cry, and only then did I learn my patient’s name.

That morning I had watched paramedics, nurses, and physicians working efficiently, if unsuccessfully, to save Gloria’s life. I had also seen how they looked at Gloria. In the Emergency Room, they saw a massive heart attack and worked efficiently to treat the broken part. As they did so, her primary care physician was in his office, where patients were viewed as billing codes. He knew that if he left his outpatient practice to see Gloria, he would lose the revenue from his scheduled appointments. If he visited her in the hospital, he could not bill for providing services to Gloria or her family because, by the rules of Gloria’s insurance, only the hospital could bill for a physician’s services. So the physician stayed in the clinic to keep the lights on. As he labored, Gloria’s son lost his mother.

Parts and money—too often that is what we physicians see when we look at patients. What is broken? Can it be patched or does it need to be replaced? How much can I bill for the procedure? How much of that fee will I take home?

The questions Gloria’s son asked that morning were very different. He wanted to know where his mother was, what had happened to her, where the physician was, and what he would do without her. He also wanted to know why I did not know her name. I tried to respond as best I could, but my words did not satisfy him or me. Instead, our meeting was another alienating encounter in a society divided by class and race. I was so confused by it that I began asking myself what we hope for when we call in the doctor.

Excerpted from The Finest Traditions of My Calling by Abraham M. Nussbaum, M.D.

Abraham M. Nussbaum, M.D., is the Chief Education Officer at Denver Health and is an associate professor of psychiatry at the University of Colorado School of Medicine. He lives in Denver, CO. 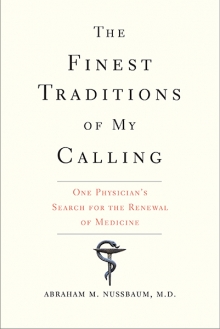