Josef Albers was a hugely influential German-born American artist and educator. This week — between March 19th, the day he was born in 1888, and March 25, the day he died eighty-eight years later — we highlight aspects of his life to commemorate his work and enduring legacy.

Josef and his wife, Anni, with whom he laid the foundations of both contemporary art education and American artistic modernism, met in 1922 in Weimar, Germany, at the Bauhaus. Though he would later gravitate toward painting, Josef was initially interested in crafts like glass working and furniture making. Anni, who because of her gender was denied entry to all workshops except for weaving, was beginning a lifelong engagement with textiles. The couple was married in Berlin in 1925 and soon became the the first and only husband-wife teaching pair at the Bauhaus. For both, this was the beginning of a life of pedagogy, and a time to form ideas about what art is and how to teach it.  Anni later wrote “one of the outstanding characteristics” about her tenure at the Bauhaus was “an unprejudiced attitude toward materials and their inherent capacities.” She appreciated how students, coming in with little or no weaving experience, would improvise and struggle, working their way towards an understanding of the technique as it was necessary to learn for their practice. Josef later described art as a “visual formulation of our reaction to life,” and art’s aim as “revelation and evocation of vision.” Both, during their time at the Bauhaus, began to theorize that art was as much in the exertion of creation as it was about the perfect final product.

By 1933 harassment by the Nazis forced the Bauhaus to close. An offer to teach at the newly inaugurated Black Mountain College in North Carolina drew Josef west, and the pair resettled in America. The couple stayed in North Carolina before settling in New Haven, Connecticut, where both worked independently on their artistic practices, and Josef taught at Yale University.  The Josef and Anni Albers Foundation, established by Josef in 1971, continues to preserve and promote the Alberses’ achievements from its home on a beautiful wooded site in Bethany, CT, near New Haven.

In addition to being makers of art, the Alberses were collectors of art.  Small Great Objects: Anni and Josef Albers in the Americas is a book and exhibition (currently on view at the Yale University Art Gallery) that highlights key objects from the Alberses’ 1,400-item collection, gathered over 30 years between 1935 and 1967.  It includes stone, ceramic, and textile Prehispanic works, as well as woven pieces from the late 19th and 20th centuries. The project is organized geographically, which imparts a sense of travel from one archeological site to the next — from Teotihuacan and Tenayuca in and around Mexico City, to Mitla and Monte Albán in Oaxaca, to Chichén Itzá and Uxmal in the Yucatán Peninsula, to Peru. 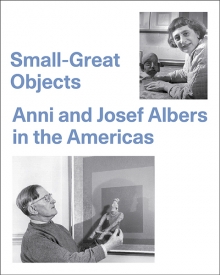 Searching for answers across time, place, and changing civilizations, the exhibition attempts to answer the question, why did two artists so committed to modernism and abstraction collect figurative art? The answer, successfully argued by curator Jennifer Reynolds-Kaye, both in the exhibition catalogue and in her thoughtful curation, is that abstract and figurative art are not necessarily diametrically opposed. She suggests both that the Alberses had figurative and representational elements in their more abstract work, and that much of the Prehispanic art they collected had abstract elements.

A ceramic vessel from the Andes (above), created sometime between A.D. 800 and 1300 has the figures of a feline and her cubs clearly displayed at the top, but the majority of the vase is painted with an abstract pattern. A tapestry, also from the Andes, woven between 1000 and 1476 contains human and animal figures, as well as intricate background patterns, that could as easily be abstract shapes as birds or plants. When viewed through this lens, ambiguity arises in the Alberses own work.

While the art collected by the Alberses is organized geographically, their own work is hung intentionally so as to be in  conversation with the Prehispanic pieces. Curator Jennifer Reynolds-Kaye described several satisfying moments where two works seemed to be perfectly in sync. One was a square Oaxacan blouse, which, when laid flat, revealed concentric squares of color, below Josef Albers’s Homage to the Square: Somber Promise I (1969). Created years apart, in different media, with different practical and artistic goals, the two nonetheless hang perfectly — roughly the same proportions, darker bands of color bracketing bright interiors. On another wall, photographs Josef took of windows around the Mitla site focus on square and rectangular windows deeply set into the walls of adobe homes. Many of these close-cropped photographs center the windows, removing any other identifying information except for perhaps the shadow of an overhang or a band of color on the wall around the opening. Reynolds-Kaye placed these photographs along with Adobe (1953), whose title points to a connection with the windows, and similar geometric studies. These seemingly abstract assemblages of color, squares, and rectangles, when considered alongside the Alberses’ travels, photographs, and interests in Central and South American art and architecture, reveals an abstract painting to have representational roots and influences.

Even when a direct inspiration for Anni or Josef’s work cannot be found in the work they collected, the exhibition is set up to highlight subtler inspirations, like fragments of colors borrowed from textiles or ceramic sculptures that appear again in prints and paintings. Flecks of blue pigment on figures originally from Jainia Island in Mexico are reflected in a bright blue Anni Albers print, Blue Meander (1970) on an adjacent wall. The bright reds and pinks of a pair of West Mexican bags appear in Josef’s painting Variant: Tension between Reds (1948–1952). Anni’s gridded prints and woven pieces borrow directly from patterns on fabric fragments from over 500 years before she was born. At its core, Small-Great Objects represents the Alberses’ deep investment in their own art making, and the ways in which their own practice was in conversation with the works they collected; the couple sought out work that they saw as sharing qualities with their contemporary projects, and they made abstract art inspired by the forms of the work they collected.

Josef Albers is perhaps best known for his 1963 work Interaction of Color, a monumental pedagogical text on color theory. From its first paperback release in 1971 it has never gone out of print, and its recent 50th anniversary occasioned the release of a new edition of the paperback as well as a critically acclaimed iPad app. Despite being over half a century old, Albers’s theories and exercises are still relevant today. Anecdotally, for the past 10 years, every syllabus of Yale College’s undergraduate course Color (Art 116) has included a reference to Interaction of Color, either as a recommended or required reading. And I still remember my freshman year, when a roommate took Color, and we spent weeks stepping around her air-drying projects and leftover paper scraps piled in the center of our common room.

The book remains exciting and progressive. It’s a work of theory but reads like a poem, with lines broken mid-sentence and thoughts organized into stanzas. Albers writes,

Our study of color differs fundamentally from a study which anatomically
dissects colorants (pigments) and physical qualities (wave length).

Our concern is the interaction of color; that is, seeing
what happens between colors.

Albers was not interested in the science of color mixing or of optics and refraction. He was interested in art at a personal level — how human beings perceive color. One of his favorite reviews of the book addressed this exact point, noting, “In an age in which increased human sensibility has become such an obvious need in all areas of human involvement, color sensitivity and awareness can constitute a major weapon against forces of insensitivity and brutalization.” Although to the casual viewer Albers’s famous squares can look sterile, his practice was built on human interaction with the environment. In his introduction he writes:

The aim of such study is to develop — through experience
— by trial and error — an eye for color.
This means, specifically, seeing color action
As well as feeling color relatedness.

Although his experimentation with color was precise and methodical, his practice hinges on words like “seeing” and “feeling,” looking at color practice as a sensory art. “What counts here,” he writes, “is not so-called knowledge of so-called facts, but vision—seeing.” He continues,

This book, therefore, does not follow an academic conception
of “theory and practice.”
It reverses this order and places practice before theory.

His approach to colors is democratic and accessible. He preferred colored paper to paint, not only because paper allowed for the repeated use of a single color (impossible to guarantee with mixed pigment), but because unlike paint, which was often messy, time consuming, and expensive, paper required only rubber cement and a razor to handle, and could be salvaged from recycling bins or cut out of magazines.

His theory of color, and his practical teaching of it, was based on his own love of color and his affection for his students. His designed his pedagogical practice around hands-on exercises, and learning by doing. In a piece of writing from 1958, a few years before Interaction of Color was published, he outlines what he thinks a successful art program needs — a palpable love of teaching from the instructor, and a love of learning from the students:

The success of such a program
obviously depends
on dedicated teaching
directed by love besides method
and devoted students
encouraged by the excitement
of growth of vision.

—Josef Albers, “To Design is to Plan and Organize”