I met Erskine Childers, a former officer of the National Student Association and a distinguished United Nations official, long after he died. If that seems impossible, let me explain. I came to know the young Erskine Childers through letters left behind in the United States National Student Association (NSA) archive at the Hoover Institution at Stanford University. In the late 1940s, as an undergraduate at Stanford, Erskine had been active in NSA and was subsequently elected an officer in 1949. I was captivated by his voice. His letters were full of passion, sometimes lyrical and poetic, especially if he was missing Ireland; at other times, they were filled with angst as he wrestled with his obligations to Irish history, the legacy of his martyred grandfather, and the question of American citizenship.

Gradually, I realized Erskine Childers’ importance to my research on the Central Intelligence Agency’s covert relationship with the NSA. Cold Warriors frequently argue that “everyone” in the late 1940s and 1950s would have cooperated with the CIA to fight international communism as they had secretly done. They condemn those who criticize them by claiming that such critics are applying contemporary standards and values retrospectively, and incorrectly, to an earlier historical period. Yet, here was “my” Erskine, fighting to preserve democratic principles, and resisting the idea of government intrusion into a student organization. His example is the best refutation of the argument that a younger generation, had they understood the temper of the times, would have embraced the CIA and its Cold War objectives. He was a contemporary, and he actively fought to keep NSA independent.

Erskine’s battle began in August 1949, when he joined more than 600 students from around the country for the NSA Congress, held that year at the University of Illinois. By then, fellow delegates had recognized his leadership talent, his unusual grasp of politics, and his interest in foreign affairs, and encouraged him to run for NSA office. He decided in the affirmative, but not before agonizing over the question of his family’s legacy. In 1922, during the Irish Civil War, the British had executed his grandfather, Robert Erskine Childers, after whom he was named. His father, Erskine Hamilton Childers, the son of the martyred patriot, had already entered Irish politics, although not yet elected President of the Republic. By taking out American citizenship, he asked himself if he was abandoning his country and his family.

Erskine ran for International Affairs Vice Presidency, unaware that this position was critical to the CIA’s agenda. Years later, I discovered agents had sought an alternative candidate. At the time, Erskine encountered electoral tactics that appalled him. He wrote to a friend. “The tricks, the deliberate attempts to distort and to confuse, the foul personal talk behind hands and doors—all this in an effort to have NSA tell the world that we had forgotten the most fundamental of inspirations….hope and faith in men and their destiny!” He explained his determination to fight in spite of these tactics by invoking his previous experience in Ireland; as a small child, he had survived being “kicked by English boys” and called “a traitor.”

At issue in the election was the question of whether NSA would cooperate with the International Union of Students based in Prague, in which communist student unions were heavily represented. Anti-communists within NSA pushed for a pro-West international alternative. Erskine did not want to foster an East-West division. In an early demonstration of his commitment to peace and diplomacy, he explained: “I do not believe for one moment that the strategy to use with communism is either to back away from it, or to present so adamantly converse a front as to make any working relationship almost impossible.” The vote was close but he won.

During his first weeks in office, Erskine was asked by the U.S. Department of State to report on NSA international activities. He declined, telling the NSA President, Robert Kelley, who was based in Madison, Wisconsin, far away from the international office near Harvard University: “I am reluctant to the point of refusing to write my personal resume of the events.” He didn’t mind sending in “official or printed literature, but I will be adamant about expenditure of especial efforts to secure information for the State Department about suspect groups or radical elements in the student community.” Even a small precedent might make NSA into “an extension division for information on the tainted few.” Kelley, by contrast, fully cooperated with U.S. government requests.

Throughout his year in office, Erskine faced and fought many such battles. He was sometimes badly treated by those who were determined to use NSA to fight international communism. In August 1950, just before his term ended, President Kelley ordered Erskine home from a European trip, denying him the opportunity to travel to Prague and personally evaluate charges of Soviet control over the International Union of Students. He reluctantly complied, but remained discreet about his upset, mindful that to make his fight public could harm the fledging student association, then only a few years old.

By the time his NSA term ended, and the number of archival letters dwindled, I had come to admire his unique blend of instinct, temperament, and commitment to democracy. It enabled him to stand for principle, even when it was an unpopular thing to do.

Getting to know someone from his or her archival letters is an oddly intimate experience. One communes — laughs, frowns, tears up, or nods in agreement. For years, I kept expecting Erskine Childers to step out of the pages I was reading and introduce himself. For one wild moment in 2015, I thought the impossible had happened, when I received an email from Erskine Childers and learned that he had a namesake son. I’m so grateful that our acquaintance has resulted in an opportunity to write about the Erskine I knew and the unusual way we met. More importantly, it has given me a chance to honor his father’s principled resistance to turning NSA into a Cold War organization.

Karen M. Paget, a former member of the National Student Association, is a contributing editor to The American Prospect and co-author of Running as a Woman: Gender and Power in American Politics. 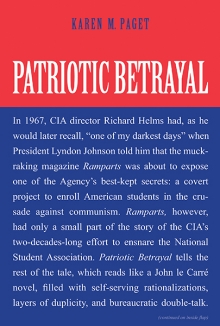