"World War I Marines with Gas Masks, circa 1918" by United States Marine Corps Archives, licensed for use on Flickr.

Today marks the centennial of the United States’ entry into World War I. To commemorate the day, we sat down with Bruno Cabanes, author of August 1914: France, the Great War, and a Month that Changed the World Forever, to discuss what he discovered about the war through his research and writing.

In August 1914 you draw from diaries, personal correspondence, police reports, and government archives to provide an account of the first month of World War I from the perspective of ordinary French people. What can a cultural history tell us about World War I that more traditional histories don’t?

A cultural approach reveals the impact of the war on individuals—both civilians and soldiers—and shows how an unexpected event could change almost everything in ordinary life. In many ways, other studies of the outbreak of the war have overlooked this dimension and focused, instead, on the diplomatic crisis of July 1914 or on the broad topics of public opinion and patriotism. What was missing in all of this was the uncertainty at the outset, and the emotions, the micro-events, the history of tears and sounds. It is necessary to understand the emotional landscape of mobilization if one is to understand it at all.  In short, I set out to reevaluate and recapture the importance of the individual in the massive, collective movement of the war.

How did you go about finding the personal documents you used for the book? Did you look outside traditional archives?

I had already used materials like wartime correspondence and diaries for my first book and drew on these sources again. I also used police reports to gain access to the local and personal levels of the war, and found a rich accounting of the day-to-day—or even hour-to-hour—incidents of the first days of mobilization. They opened a window into both the diversity and intensity of experiences of the war.

What sense of responsibility do you, and other historians, feel in conserving and telling the stories of these individuals now that we are arriving at a point where nobody who was alive during WWI is still living today?

A sense of responsibility follows the recognition that, in the years 1914-1918, global history became the history of everyone. Along with soldiers, the war had an enormous impact on wives, mothers, children, families and local communities, and it is important to preserve the lost voices of these participants alongside the memories of those who died in battle.

In the beginning of August 1914, you write, “In short, this book is an intimate history of the end of a world.” How does this sentence relate directly to the French people and the individuals present in your book?

Several worlds came to an end in August 1914. The Great War brought the trauma of invasion and, later, of occupation. It brought a reversal in the normal succession of generations; for the first time on such a scale, the young died before the aged, and parents mourned their sons.  Men were suddenly absent from communities, especially in rural France.  Women took on heightened responsibilities in both cities and the countryside.  People could no longer imagine the violence of battles. And yet, they anticipated the war as the end of the world; there was a tension between their absence of knowledge of the reality and their keen awareness that something monstrous was happening.

How did news of the sudden mobilization feel to the French people and how would French families have processed it?

The French people accepted the outbreak of war with resignation and resolution. This was only explainable by two factors.  First, they assumed that it would be quick—over by Christmas even. Second, they understood that it was as defensive war, fought both in defense of the nation and of their local communities.

In what ways did the devastating number of deaths in August of 1914 change how the French people looked at the war?

It is important to understand that the scale of death did not affect France in just demographic terms. It also triggered a crisis of rituals. Many soldiers’ bodies were either buried on the battlefields or fully erased by the violence of war. The interruption of a carefully preserved tradition of mourning forced the French to invent new ways, in the absence of bodies, to mourn their dead and celebrate the memory of those who were lost.

How did the massive influx of refugees even further affect the French’s daily lives?

There were tens of thousands of refugees fleeing from Belgium and from northern France. They were not always welcomed and were occasionally viewed as a danger and associated with fears of German spies. Their real impact was in the rumors that came with them, like those about German soldiers severing hands and massacring civilians. These rumors triggered such fears about invasion that even in Rouen, a city far removed from the front lines, a full third of the population fled. The stories and rumors of invasion that accompanied refugees, moreover, called up memories of the 1870-1871 Franco-Prussian War, and represented a sort of re-traumatization for the French. There was a complex relationship between the fears rooted in the immediate circumstances and the long-term memory of Franco-German relationships. Refugees, in short, brought fears, painful memories, and, symbolically, the war itself into otherwise insulated French communities.

How did the frequent overlapping of home front and battlefront during the war influence everyday life?

In its early days, the war was one of movement. In the course of a one-month campaign, the invading force shifted the front line from the northern frontier all the way to the Marne. This meant that, for many French people, the home and battle fronts did not simply overlap; the former was actively transforming into the latter as the invading force plunged deeper into French territory. Another key point in the blending of home and front was the widespread perception of the hidden enemy. This was characteristic of total war. The enemy could be anyone—strangers, neighbors, or those with even the slightest connection to Germany. Germans in Paris became such targets of suspicion that even some Alsatians who had fled in 1871 but who still bore German-sounding names became associated with the enemy. Accompanying the hidden enemy was the fear of an invisible death, also characteristic of the conflated spheres of home and front. Civilians’ fears bore stories that Germans distributed poisoned candy to children and poisoned milk to kill French babies. There were fears that unseen Zeppelins could rain death from above. It was one of the major transformations World War I that fear of death at the hands of the enemy became disconnected from combat.

April 6th, 2017 marks the centennial of the date that the U.S. Congress officially declared war upon the German Empire. How did the U.S. entry into the war affect the French people?

Above all, the American entry was a sign of hope. The French knew that it would change the balance and bring, new, fresh troops. It took almost ten months for the American troops to train and adapt to the new conditions of warfare, however, so the real turning point did not come until spring 1918. In other words, the material impact of the American entry was not as massive as we tend to think—although the 54,000 deaths were no doubt a tremendous sacrifice. The real impact was psychological and symbolic.

What was of one of the most surprising things you learned while looking at all the primary source material for your book?

Most surprising was the rapidity of the transition from peace to war and how much things changed not only on a national level but on an intimate, local one. The events had a massive impact on everyday lives in just a few days. Amazing too, was the intensity of people’s self-mobilization—not just for soldiers but also for civilians—which was visible in the violence of reactions against Germans and those considered internal enemies. The country self-mobilized very quickly, likely because of fears of invasion and the memory of 1871.

Bruno Cabanes is the Donald G. and Mary A. Dunn Chair in Modern Military History at Ohio State University. Before coming to Ohio State, he taught at Yale University. He is the author of The Great War and the Origins of Humanitarianism, 1918–1924. He lives with his family in Bexley, OH. 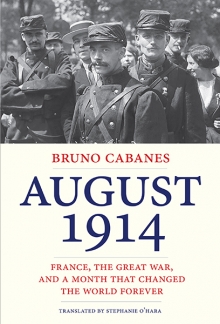