Lawrence Binyon’s poem “For the Fallen” was first published in the London Times on September 21, 1914, six weeks after the Great War had begun. It is sometimes suggested that Binyon, who was a distinguished art historian as well as a poet (he was the British Museum’s Keeper of Oriental Prints and Drawings when the war began), wrote the poem in despair over how many had already died and how many more were being condemned to the same fate. But there is no basis for such a reading. Binyon simply could not have known this, if for no other reason than that it was not till the end of the First Battle of Ypres two months later, an engagement at which the majority of Britain’s prewar professional army was either killed or wounded, that people at home began to realize just how terrible a toll the war promised to exact.

In reality, “For the Fallen” is a classic patriotic poem, far closer in spirit to Horace’s “Dulce et decorum est pro patria mori” (It is sweet and fitting to die for one’s country)—an injunction that actually had been graven into the wall of the chapel of the Royal Military Academy at Sandhurst in 1913— than to the work of the great British soldier-poets such as Wilfred Owen, who would appropriate the motto for one of his finest poems, but only in order to call it “the old lie.”

That such prescience regarding what was to come was unavailable to Binyon weeks into the war hardly dishonors him. Too old to serve in the trenches, in 1916 he nonetheless would volunteer for duty as a hospital orderly on the Western Front— no mean commitment. And Binyon’s poem has endured. As I write this, 101 years after the First Battle of Ypres, “For the Fallen” remains the quasi-official poem of remembrance, without which virtually no memorial ceremony for the dead of both World War I and World War II in Britain, Canada, Australia, or New Zealand is considered complete. Its fourth and best-known stanza reads:

They shall grow not old, as we that are left grow old:

Age shall not weary them, nor the years condemn.

At the going down of the sun and in the morning

We will remember them.

In Australia, where the memory of Australians’ sacrifice during the First World War, above all during the Dardanelles campaign against the Turks in 1915, played an extraordinarily important role in the forging of the modern Australian state “For the Fallen” is now known as “The Ode of Remembrance.” And at many Anzac Day ceremonies, after the fourth stanza is declaimed, it is customary for those present to respond with the words “Lest we forget,” as if to the invocation at a church service, which in a sense, of course, it is. In doing so, the participants meld the Binyon poem with Rudyard Kipling’s far greater poem “Recessional,” from which the line “Lest we forget” is taken, a line that, twice repeated, concludes each of its stanzas, as in this, the best known of them:

Far-called, our navies melt away;

On dune and headland sinks the fire:

Lo, all our pomp of yesterday

Is one with Nineveh and Tyre!

Judge of the Nations, spare us yet,

As is so often the case in his work, Kipling had a far more complicated and pessimistic view of the world, above all of the fate of nations, than the memory of him either among his critics or his (sadly diminished number of) admirers would lead one to believe. Although advanced in inverted terms, since the poet is in effect appealing for divine intercession for a deferral of what he knows to be the foreordained outcome, “Lest we forget” is a mournful acknowledgment that such forgetting is inevitable—both on our own parts as individuals and with regard to us after we are gone. Implicit in Kipling’s line is a far more terrifying one: “When we forget.” In this, “Recessional” echoes the chilling words of Ecclesiastes 1:11: “There is no remembrance of former things; neither shall there be any remembrance of later things that are to come with those that shall come after.” And more proximately, Kipling’s poem is a gloss—explicitly so, at one point—on Shelley’s “Ozymandias” and its unflinching meditation on the ephemeral nature of even the most monumental creations and martial accomplishments of human beings and the societies to which they have belonged.

Deep down, we all know this to be true, however difficult it is to imagine how we could live our daily lives with even a bare minimum of serenity or success without at least acting as if we believed otherwise. For to fully make Ecclesiastes 1:11 our true north would be to live as if we were already dead. And this, a few saints and mystics excepted, and surely their capacities in this regard are inseparable from their disengagement from the world, we cannot do—“No man can stare for long at death or the sun,” as La Rochefoucauld said—nor, even were it possible, is there any moral or ethical imperative for our doing so. It is probably true that were we to imagine those of our loved ones whom we will survive only as dust, we might be more loving, more forgiving, more willing to put their wishes and desires before our own. But to do this, we would have to be able to live our lives as if we had already experienced the whole of them, which is a contradiction in terms. For as Kierkegaard said, “Life must be lived forward, but can only be understood backward.”

A successful society based on such a focus is still harder to imagine. For while such a society might be more “truthful” in some absolute sense, fostering or conserving a moral conscience within it would be impossible. Even to care about the present would be challenge enough, let alone finding a way to care about either the past or the future. It may be that “the ultimate truth is fearless,” as the Buddhist sage Trungpa Rinpoche once put it. But in thinking about history, this particular truth is far more likely to terrify and paralyze than encourage and inspire. As the German philosopher Karl Löwith put it in his now largely forgotten masterpiece The Meaning of History (1947), “To ask earnestly the question of the ultimate meaning of history takes one’s breath away. It transports us into a vacuum which only hope and faith can fill.”

From In Praise of Forgetting by David Rieff, published by Yale University Press in 2016. Reproduced by permission.

David Rieff is the author of many books, including, most recently, The Reproach of Hunger: Food, Justice, and Money in the 21st Century. He lives in New York City. 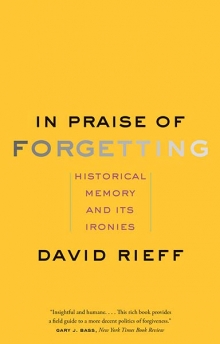