To celebrate the publication of The Papers of Benjamin Franklin: Volume 42 this month, we’re highlighting the founding father’s opinions on immigration as found in his letters and pamphlets. The following excerpt is taken from his pamphlet “Information to Those Who Would Remove to America.”

With Regard to Encouragements for Strangers from Government, they are really only what are derived from good Laws & Liberty. Strangers are welcome because there is room enough for them all, and therefore the old Inhabitants are not jealous of them; the Laws protect them sufficiently, so that they have no need of the Patronage of great Men; and every one will enjoy securely the Profits of his Industry. But if he does not bring a Fortune with him, he must work and be industrious to live. One or two Years Residence give him all the Rights of a Citizen; but the Government does not at present, whatever it may have done in former times, hire People to become Settlers, by Paying their Passages, giving Land, Negroes, Utensils, Stock, or any other kind of Emolument whatsoever. In short America is the Land of Labour, and by no means what the English call Lubberland, and the French Pays de Cocagne, where the Streets are said to be pav’d with half-peck Loaves, the Houses til’d with Pancakes, and where the Fowls fly about ready roasted, crying, Come eat me!

Who then are the kind of Persons to whom an Emigration to America may be advantageous? and what are the Advantages they may reasonably expect?

Land being cheap in that Country, from the vast Forests still void of Inhabitants, and not likely to be occupied in an Age to come, insomuch that the Propriety of an hundred Acres of fertile Soil full of Wood may be obtained near the Frontiers in many Places for eight or ten Guineas, hearty young labouring Men, who understand the Husbandry of Corn and Cattle, which is nearly the same in that Country as in Europe, may easily establish themselves there. A little Money sav’d of the good Wages they receive there while they work for others, enables them to buy the Land and begin their Plantation, in which they are assisted by the Good Will of their Neighbours and some Credit. Multitudes of poor People from England, Ireland, Scotland and Germany, have by this means in a few Years become wealthy Farmers, who in their own Countries, where all the Lands are fully occupied, and the Wages of Labour low, could never have emerged from the mean Condition wherein they were born.

From the Salubrity of the Air, the Healthiness of the Climate, the Plenty of good Provisions, and the Encouragement to early Marriages, by the certainty of Subsistance in cultivating the Earth, the Increase of Inhabitants by natural Generation is very rapid in America, and becomes still more so by the Accession of Strangers; hence there is a continual Demand for more Artisans of all the necessary and useful kinds, to supply those Cultivators of the Earth with Houses, and with Furniture & Utensils of the grosser Sorts which cannot so well be brought from Europe. Tolerably good Workmen in any of those mechanic Arts, are sure to find Employ, and to be well paid for their Work, there being no Restraints preventing Strangers from exercising any Art they understand, nor any Permission necessary. If they are poor, they begin first as Servants or Journey men; and if they are sober, industrious & frugal, they soon become Masters, establish themselves in Business, marry, raise Families, and become respectable Citizens.

Also, Persons of moderate Fortunes and Capitals, who having a Number of Children to provide for, are desirous of bringing them up to Industry, and to secure Estates for their Posterity, have Opportunities of doing it in America, which Europe does not afford. There they may be taught & practice profitable mechanic Arts withut [without] incurring Disgrace on that Account; but on the contrary acquiring Respect by such Abilities. There small Capitals laid out in Lands, which daily become more valuable by the Increase of People, afford a solid Prospect of ample Fortunes thereafter for those Children. The Writer of this has known several Instances of large Tracts of Land, bought on what was then the Frontier of Pensilvania, for ten Pounds per hundred Acres, which, after twenty Years, when the Settlements had been extended far beyond them, sold readily, without any Improvement made upon them, for three Pounds per Acre. The Acre in America is the same with the English Acre or the Acre of Normandy.

From The Papers of Benjamin Franklin: Volume 41, edited by Ellen R. Cohn, published by Yale University Press in 2014. Reproduced by permission. 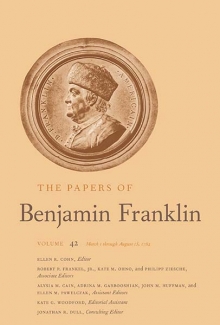