In spring, you can feel life stirring in the barest twigs and the silhouetted catkins look as if a diminutive duck has run across the sky. One day the twigs are just beginning to thicken and brighten and bulge; by the next they are covered in pincer-paired leaves and pale, lime-white or pink-tinged blossom. There is nothing tentative about these vernal explosions. When the days are longer, it is all sap and fresh smells, and the liquid calls of birds hidden in the drifts of thicker foliage. The bark has been through it all before, but the craggy faces of aging willows and the peeling skins of cherry trees seem less pinched in the bright light. By early November, when it is all dank and dark, the woods have a different taste, which does not quite match the ember-fall, sugar-brown shaken leaves.

I have always begun to feel suffocated after too much time indoors. The arboreal impulse is all outwards, into fresh air. Each tree is a mass of little bursts of energy, seemingly at odds with each other, though remarkably harmonious overall. Each variety has its own character and calendar, standing ready to join in the waves of spreading greens or golds at just the right time. “Oak before ash, we’re in for a splash; ash before oak, we’re in for a soak.” Whoever came up with this old rhyme was evidently more interested in cheering people up than in predicting the weather, because the ash seldom ventures into leaf before the oak.

It is not just the seasonal cycle of shifting colors that makes a wood so compelling: the very same trees can appear quite differently on consecutive days, or even at different times of the same day. For Samuel Taylor Coleridge, left behind to recover from a mishap with boiling milk while his friends went off for a country walk, the garden seat under the lime seemed like a prison—until he began to imagine what they were enjoying and, with that, his own lime-tree bower turned into a mass of “broad and sunny” leaves, dazzling, dappling, liberating and uplifting.

Tree transformations are not just a matter of the beholder’s mood, of course. Claude Monet would set up three canvases side by side, moving from one to another with the light, in his attempts to capture nature’s colors truthfully. His sequence of Poplar paintings shows a line of trees snaking along the River Epte in bright sunlight, in strong wind, or in the more subdued tones of an overcast day. These were trees whose fascination could not be withered by age, nor staled by custom, like the pine trees at Mont St. Victoire which Paul Cezanne painted again and again, never tiring of their familiar and yet still oddly elusive forms.

All kinds of tree can reveal unexpected internal connections. The smell of cypress in the rain, or a drift of blossom on a warm spring day, can waft us back to moments on wet pavements or under that old, half-forgotten, pear tree: to those indelible marks of personal history that lie unrecorded by camera or anecdote. Any horse chestnut with a strong, spreading lower branch and puckered trunk can take me back to one I used to climb as a child and ride like a cantering horse or a boat skimming the waves. We moved house frequently, so I do not know whether the tree is still standing, but like many others before and since, it seeded itself in my mind and is there, ready to be shaken into imaginative leaf if prompted. I very rarely seek out trees for old times’ sake, though. I like them for themselves. The commonest of trees, especially, possess the powerful appeal of things that just grow because they must—it is what trees do.

From The Long, Long Life of Trees by Fiona Stafford, published by Yale University Press in 2016. Reproduced by permission.

Fiona Stafford is professor of English language and literature, University of Oxford. She is author and presenter of two highly acclaimed series for BBC Radio 3 titled The Meaning of Trees. She lives in Bucks, UK. 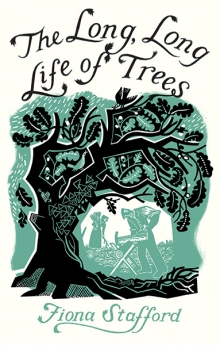