Microsoft CEO Steve Ballmer was incredulous. “There’s no chance that the iPhone is going to get any significant market share. No chance,” Ballmer prophesied during a CEO Forum before Steve Jobs released the iPhone in June. But, by the end of the first week of sales, most storeroom shelves were bare; Apple and its AT&T partner sold hundreds of thousands of phones. The company was fast on its way to taking more than 20 percent of the smartphone market within just a few months.

To those who waited in line outside Apple stores for a day or two to snap up the first phones—or paid others hundreds of dollars to wait for them—the iPhone was a revolution, the stuff of dreams. Although smartphones had been out for a few years, Jobs’s phone, they believed, was set to be the smartest. Some in the media labeled it the “Jesus Phone” because of the religious fervor surrounding its launch and the blind faith that Jobs’s new gadget would create not just a better phone, but a product that would reshape everything that followed it.

As is now legend, the phone banished number buttons and the physical keyboard. Instead the iPhone became the first mainstream product to rely on a “multi-touch” glass screen—a highly functional screen that allows the tapping, sliding, and pinching that are now second nature for writing e-mails, determining directions, and hailing a cab. Jobs himself commented, “It works like magic.”

While Jobs’s creative genius is beyond mythical, something greater was at play. Lost in the hubbub of new features and beyond the phone’s powerful yet simple design was the most remarkable characteristic of iPhone—the reason why a powerful device can sit comfortably in the palm of your hand—it relies on nearly half the elements on the planet.

These metals are the reason that devices are getting smaller and more powerful. For Jobs, the “magic” in his glass is due to a dash of the rare metal indium, which serves as the invisible link, a transparent conductor between the phone and your finger. A dusting of europium and terbium provides brilliant red and green hues on the screen, specks of tantalum regulate power within the phone, and lithium stores the power that makes the phone mobile. Rare metals are also crucial to manufacturing the iPhone’s components: cerium buffs the glass smooth to the molecular level.

To be sure, the iPhone was far from the first or only product to rely on rare metals. In fact, the increasing use of rare metals correlates well with the sale of Apple and other computer products, which began some thirty years earlier. But Jobs’s drive for smaller, more powerful gadgets led his company to increasingly harvest the complete palate of materials on the periodic table and deliver them to the masses. What’s more, the iPhone’s commercial success transformed our expectations of our gadgets. It spurred new industries, including mobile apps and tablets, making the power of rare metals indispensable not just in smartphones but in a myriad of new technologies. Jobs not only lived up to his word of reinventing the phone, he helped reinvent the world’s resource supply lines. In the process, he also helped bring forth the dawn of a new era: the Rare Metal Age.

Rare metals are everywhere—really everywhere—from soaring bridges to earphone buds. They are in couches, camera lenses, computers, and cars. But they are rarely used alone or as the primary material. In essence they fill a role similar to that of yeast in pizza. While they are only used in small amounts, they’re essential. Without yeast there’s no pizza, and without rare metals there’s no high-tech world.

We lack awareness of them because we never directly buy them as we do other commodities such as gas or corn. Rare metals are buried away in components that are essential to almost every gadget we use, like the rare earth permanent magnet. While the production of permanent magnets is approximately a mere $billion market today, if we were to add together the value of all industries that rely on these magnets—automobile, medical, and military—the sum would reach trillions of dollars.

To paraphrase a slogan of the chemical corporation BASF, rare metals don’t make the products we buy; they make the products we buy smaller, faster, and more powerful. They made Jobs’s iPhone thinner, more functional, and more mobile. This is because each rare metal has its own characteristics that serve very specific functions. For example, it can be malleable (indium), ductile (niobium), toxic (cadmium), radioactive (thorium), or magnetic (cobalt), or it can melt in your hand (gallium). And like characters in the X-Men comics, they all have their own superpowers. Terbium produces more vibrant light in television; dysprosium and neodymium make incredibly strong magnets possible; antimony helps resist fire.

From The Elements of Power by David S. Abraham, published by Yale University Press in 2017. Reproduced by permission.

David S. Abraham is a natural resource strategist who currently directs the Technology, Rare and Electronics Materials Center. His writing has appeared in the New York Times and the Los Angeles Times. 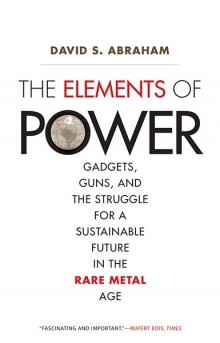