The Oxford historian Hugh Trevor-Roper, whom British Intelligence had appointed to counter Soviet claims that Hitler was not dead but had sought refuge with the Western Allies, interviewed Albert Speer while he was in custody at Kransberg Castle, where he awaited trial at Nuremberg. He had found him to be polite, sympathetic and informative. He was neither an autocrat nor a courtier, but an unassuming intellectual, who seemed oddly out of place among the “opprobrious tomfools” who surrounded the Führer. Indeed, Trevor-Roper paid him the highest compliment by saying that he hardly seemed to be a German. The mystery for him was how such a man, who grew in stature when compared with Hitler’s other closest associates, should have been so close an admirer of the dictator and how he could have served him so diligently.

Speer was for Trevor-Roper an organizational genius who could have served any other type of politician equally well. He had the courage to stand up to Hitler when it was obvious that all was lost and the honesty to admit his guilt. His admiration for Speer was enhanced by his belief that he had carried out a “Speer revolution” by converting a peacetime economy into a wartime economy. He had seized the opportunities available in the “leadership state” (Führerstaat) to take control over all aspects of armaments production, but he was wise enough to give industry its head and refused to burden it with unnecessary regulation.

By 1945 Speer saw that his task was becoming impossible. Raw materials were in short supply. The Allied air offensive was causing havoc. The enemy’s overwhelming superiority in men and material could not possibly be matched. Dreams of “miracle weapons” that would turn the tide were shattered. Realizing that victory was out of the question, Speer now tried to save what could be saved in order to prepare the way for the transition back to a peacetime economy. By the autumn of 1944 Trevor-Roper saw Speer and Hitler on a collision course, to the point that he believed Speer’s tale about planning to destroy Hitler’s entire court by introducing poison gas into the bunker in the Reich Chancellery’s garden. But he also realized that it was precisely Speer and his ilk that had made the implementation of Hitler’s abhorrent ideas possible, so that in spite of his many fine qualities future historians would see him as one of Nazi Germany’s major criminals.

Trevor-Roper continued to be fascinated by Speer. He even considered writing a biography about him. In 1978, when questioned by Speer’s ghostwriter and biographer, Joachim Fest, he said that he had been so favorably inclined towards Speer at Kransberg because he was in such marked contrast to the contemptible and servile “jackasses” in the Nazi leadership. Now he had found the key to the “Speer mystery.” He was not wicked, hard-hearted or mean-spirited. He was something much worse. He was morally and emotionally empty. Speer was deeply hurt when Fest maliciously repeated these words. He protested that his conclusions were far- fetched and the line of argument tortuous. But Speer missed the point. Trevor-Roper realized that Speer’s deeply flawed character was a key to the understanding of the Third Reich. Whereas studies of political desperados, sadistic adventurers and peddlers of noxious notions revealed little but psycho-portraits of criminally inclined outsiders, for whom it is impossible to feel little other than the deepest revulsion, it was the Speers that made the regime possible. Speer’s circumscribed confession of guilt was part of a deliberate attempt to distance himself as far as possible from this unsavory bunch, in the hope thereby of absolving himself from the regime’s worst crimes. In fact it only served to show how closely they worked together.

This was something of which Speer was uncomfortably aware. In a note dated 11 October 1946 he wrote: “It seems to me that the Himmlers, Bormanns and Streichers do not explain Hitler’s success with the German people. On the contrary, Hitler was buttressed by the idealism and devotion of people like me. We, who put everything else first, made it all possible. Crooks and criminal elements are always there. They explain nothing.” Speer was of the new managerial type, untroubled by moral preoccupations, determined to make his way in the world, willing unquestioningly to submit to the exigencies of the times and to enjoy its fruits.

From Speer: Hitler’s Architect by Martin Kitchen, published by Yale University Press in 2015. Reproduced by permission.

Martin Kitchen is professor emeritus of history at Simon Fraser University and the author of numerous books on European and German history. He lives in British Columbia. 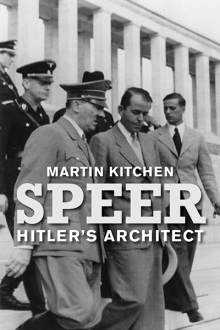