"World War II Short Sunderland flying boats" by Photos of the Past, licensed for use on Flickr.

The Second World War was not just one of the two greatest military efforts ever undertaken by the United Kingdom, but also, albeit quite by chance, one of its two greatest ever sociological experiments. Between 1939 and 1945, Britain mobilized around 5.8 million men and 640,000 women for military service. The former represented about one in four of the entire male population of the United Kingdom, and an even larger proportion of the young and able-bodied. Three out of every five men born between 1905 and 1927 found themselves serving in the armed forces during the Second World War; seven out of ten born between 1915 and 1927. Of those 5.8 million, the majority—around 3.8 million—spent their war years in the British Army. Of those 3.8 million men, all but 258,000 were civilians on the day war broke out. Between the invasion of Poland and V-J Day, in other words, around 3,542,000 ordinary Britons, very few of whom had ever had any previous military experience or training, were extracted from civilian life and placed for up to seven years into the Army, an institution with practices, assumptions and an ethical code utterly different from that which the majority of them had ever known before. It was an audacious piece of social engineering.

It was not completely unprecedented. Britain had been through such an experience once before. Indeed, between 1914 and 1918, it had mobilized slightly more men for military service—6.1 million. But the experiences of Army service in the two world wars were very different from one another, even though they were separated by barely a quarter of a century. Part of the reason for that bifurcation in experience was that the Second World War would take a very different course from the First, a difference that can be seen most starkly in their respective death tolls. The First World War was an exercise in mass industrialized slaughter never known before or since in British history. It cost the lives of 722,785 Britons, 673,375 of whom were soldiers. By contrast, just 270,139 British servicemen as a whole, and 146,346 soldiers specifically, died between 1939 and 1945—the Army’s losses, then, only a fifth of what they had been from 1914 to 1918. One in eight of the soldiers who served in the First World War never came back. Only one in 25 did not return from the Second World War. At the most basic level, the difference between joining Chamberlain’s and Churchill’s army rather than Asquith’s and Lloyd George’s was that doing so was a good deal less likely to get you killed.

But we should not conclude too readily from this that being in the Army of the Second World War was preferable in every way—or even necessarily safer—than being in the Army of the First. To be sure, the number of casualties suffered by the British Army from 1939 to 1945 was much lower than that from 1914 to 1918, making the British experience of the two world wars almost unique amongst the Great Powers; France was the only other major combatant afflicted in this way. But human loss was distributed much more unevenly in the Second World War. Most soldiers from 1914 to 1918 were front-line infantrymen. The burden of their sacrifice was heavy, but it was shared widely across the various units of the Army. Each man enjoyed, if nothing else, the consolation that his ordeal was being commonly experienced and understood. During the Second World War, barely one in five British soldiers were mustered into the infantry. But it was the “Poor Bloody Infantry” (PBI) that continued to endure the worst and most dangerous conditions of battle. Many soldiers between 1939 and 1945 would find themselves subsisting and fighting in environments that were no less hazardous and unpleasant—indeed, in many ways rather more so—than the Western Front had been a quarter century before. The Normandy campaign chewed up lives with terrible relentlessness; the Army’s monthly battle casualty rate as it fought its way out of the D-Day bridgehead from June to September 1944 was more than twice what it had averaged in France during the First World War. But unlike the Tommies of the trenches, the infantrymen of Montgomery’s army had to go through their ordeal without the solace of knowing that all their comrades had it at least as bad as they did. There was something particularly cruel about front-line combat service in the Second World War: for while a few suffered, the majority were merely spectators.

The burden of overseas service was also far less equitably distributed in the Second World War than it had been in the First. Most soldiers of 1914–18 would, after their initial period of recruitment and training, spend the entirety of their war in France and Belgium. In September 1939, it seemed that this pattern of deployment was going to repeat itself. Then, as in August 1914, the British Army was being sent across the Channel to take up a position on the French left flank. “Twenty-four years to the month have gone between my first and second journeys to France to join a British Expeditionary Force,” wrote war correspondent James Lansdale Hodson as he prepared to leave England with the first troops on a grey-funnelled troopship: “My thoughts are occupied by memories: how we, that first time, marched out from Tidworth in the dark, loaded like mules, leather equipment creaking, heavy boots crunching the gravel. No music, no song on our lips.” There was, thought Hodson, a “queer homecoming” to it all, “a strange feeling that the intervening years have never happened.” But just nine months later, the similarity between the two operational distributions came to a swift and shocking end when the BEF was harried back across the Channel in disarray. With the fall of France, the British were expelled from northwestern Europe; they would not return for four years. For most of the war, then, a posting overseas for a British soldier meant expatriation to a much more distant locale—to Egypt or Palestine, Sicily or Italy, India or Burma. You were much less likely to be sent abroad at all than you had been in the previous conflict. But if you were one of those chosen to go, you would probably be dispatched to a place that was utterly unfamiliar to you, to dwell alongside people you had little in common with, with little hope of home leave, much less repatriation, until the end of the war—and you might have to wait a good deal of time even then. The melancholy of homesickness would belabor British soldiers in the Second World War much more than in the First.

From Browned Off and Bloody-Minded by Alan Allport, published by Yale University Press in 2015. Reproduced by permission.

Alan Allport is assistant professor of history at Syracuse University. He lives in Syracuse, NY 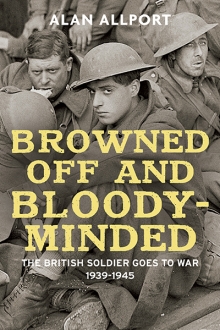