It’s a good story, but will it sell?

It’s the rare young writer who doesn’t fantasize about the best seller that would make her career. The truth of the matter, though, is that very few published writers actually support themselves by what they write. When I was a young teacher just out of graduate school, I had a colleague who proved to be the exception. Having written a good first book that some years later was sold for its movie rights, he had bright prospects ahead. He kept writing, and his books kept selling. But he nonetheless also kept his day job for some twenty years before he was able to give it up and become a full-time professional writer. Moreover, the only way he could afford to do that was instructive. Aside from a used sports car that he bought with a small part of his first big earnings, he put the rest of it away until its annual yield equaled his salary from his university job. Then he quit and moved far away and wrote, wrote, wrote. I had plenty of other very good writers as colleagues, but they never managed to write themselves into similar freedom.

Actually, the idea that writers might even be able to support themselves by the products of their imagination is a fairly modern one. It wasn’t really until the early nineteenth century, when Lord Byron was the first celebrity poet and Sir Walter Scott turned from verse to prose and invented the immensely popular historical novel, that workers in the literary vineyard were able to even imagine that their labors could support them.

In the United States, the first novelist to live off his earnings was a sometime Yale student and sometime naval officer named James Fenimore Cooper (1789-1851). In 1820, when his promised inheritance from his father evaporated, Cooper asked himself an implausible question: if Walter Scott could make a lot of money writing fiction in Britain, why couldn’t he do the same thing here? The idea was preposterous. For one thing, Cooper was an avid reader but an utter novice as a writer. Furthermore, in the fifty years leading up to 1820, only about a hundred novels had been written by American writers. Most of those authors wrote only one or two such books and paid to have them printed and sold. There was no real publishing infrastructure in place. When Cooper wrote his first book, a knock-off of Jane Austen called Precaution (1820), he had to pay to have it printed (the funds came from his profits on a whale ship that was itself financed with borrowed funds). Cooper’s second, third, and fourth books—The Spy (1821), The Pioneers (1823), and The Pilot (1824)—were very popular and sold well here and in Europe, but even so Cooper still had to pay for their production. He typically used what he made on one book to underwrite the costs of the next one. Finally, with The Last of the Mohicans (1826), Cooper managed to sell his rights to an enterprising Philadelphia firm of bookseller-publishers that over the next two decades remained his chosen partner. Publishers were as new a breed as professional novelists at the time. The partnership was therefore as innovative for American culture as it was profitable for that firm and for Cooper.

Cooper’s surprising success owed a good deal to his range of interests as a writer. He knew the sea and the frontier exceptionally well, and made these two locales into key settings for American novelists. What made him additionally important for would-be contemporary writers was the fact that he devoted as much energy to figuring out how to produce and sell his works as he did to writing them in the first place. In the 1820s, he wrote 10% of all American novels, and six of the nine books he published then were bestsellers. By working out the means by which The Last of the Mohicans and its successors yielded profits to him and his publishers, Cooper provided other aspiring novelists with a model of how they too might proceed. He wrote another two dozen novels from 1830 to his death in 1851, along with a raft of non-fiction books. Not everything went smoothly for him personally or professionally. He and the Philadelphia firm parted company in 1844, for one thing, and he had to improvise a series of new arrangements for getting his books into the hands of readers. Some books he again produced himself; others he sold to new firms, including that headed up by the innovative New Yorker George P. Putnam. But Cooper had the wit to keep writing and the business savvy to keep working out ways to get his books to market. And he thereby continued to give his contemporaries and their successors a model of how to make it in the writing trade.

It is no coincidence, I think, that my colleague in that first job had a particular liking for Cooper’s books. He regularly taught The Deerslayer (1841), the last of the five books Cooper wrote about his celebrated frontiersman, Natty Bumppo. And my colleague’s own fiction often employed formulas Cooper first established—the colleague was David Morrell, after all, author of First Blood (1972). Although Morrell may not have realized it, Cooper provided him not only with artistic guidance but also with career advice: keep writing, but don’t forget that in the modern world books are articles of trade as well as works of art.

Wayne Franklin is professor of English at the University of Connecticut, Storrs. His biography James Fenimore Cooper: The Early Years was selected as an Outstanding Academic Title in 2008 by the AAUP and Choice magazine. He lives in Hebron, CT. 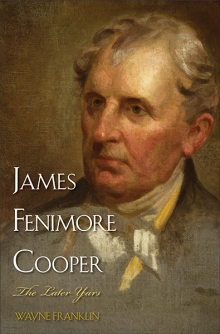