"A South-East View of the City of Boston in North America" by J. Carwitham, available on public domain at Wikimedia Commons.

What can the story of an eighteenth-century woman’s life tell us about the rise of evangelical Christianity in America?

This is the story of Sarah Osborn, a woman born three centuries ago, and the strange yet familiar world in which she lived. Strange, because she rejected many of the axioms about human goodness, freedom, and self-determination that Americans today take for granted. Familiar, because she belonged to the first generation of evangelicals in America, and she helped create a dynamic new religious movement that has flourished in our modern world. Her passionate language of sin, repentance, and conversion still reverberates on the American landscape, a tribute to the enduring power of born-again Christianity.

Few people today have ever heard of Sarah Osborn, but at a time when virtually all women were forbidden to vote, attend college, seek ordination, or own property if they were married, she became a well-known religious leader. Her life story, as dramatic as a novel, was filled with tragedy. Born in 1714 and raised by parents whom she later described as “severe,” she struggled with suicidal feelings in her youth; eloped at the age of seventeen with a sailor, Samuel Wheaten, who died two years later, leaving her with a one-year-old son to support; married a tailor, Henry Osborn, a widower with three children, who suffered a physical or mental breakdown that left him unable to work; and toiled long hours as a schoolteacher in order to pay her family’s bills. Despite her constant battle to achieve economic security, she remained so indigent throughout her life that her name never appeared on Newport’s tax lists. Her beloved son, her only child, died at the age of eleven. Through it all, she endured chronic bouts of illness. Although it is impossible to diagnose her disease across the span of almost three centuries, her symptoms suggest that she may have suffered from either rheumatoid arthritis or multiple sclerosis.

Yet despite these tribulations, Sarah was so charismatic that many people sought her spiritual counsel. Like the followers of medieval women saints, they seemed to interpret Sarah’s afflictions as a mark of her sanctity, a symbol of her closeness to a suffering Christ. Reputed to be gifted in prayer, she became more popular than any of the ordained ministers in her town. During the mid-1760s she emerged as the leader of a remarkable religious revival that brought as many as five hundred people—including large numbers of slaves—to her house each week. Although she remained poor, strangers from as far away as Canada and the West Indies sent money to help defray her expenses, eager to help the woman who had become virtually a Protestant saint.

Sarah spent many hours teaching her school, reading the Bible, attending church, doing chores, and sharing the gospel, but she saw her life first and foremost as a writing life: she wrote early in the morning, sometimes before daybreak, putting down her quill only when it was time to feed her family and teach her students; she wrote at noontime between sessions of her school; and if she could force herself to stay awake she wrote late in the evenings by the light of her fireplace, squinting to see the pages in front of her. If she wore a pocket tied around her waist (a common piece of clothing for colonial women), she may have carried a pen and paper with her as she did her chores. Because she hoped to make a “hidden God” visible, she picked up her pen day after day, hoping to see his refracted image on the page. “O blessed be God that I have been taught to write,” she rejoiced in her diary, “since that is the means that God has made the most Effectual of all other to fix my thoughts on Eternal things.” When she explained that “‘tis in this way of musing that the fire burns,” she echoed a verse from Jeremiah: “His word is in my heart like a fire, a fire shut up in my bones. I am weary of holding it in; indeed, I cannot.” Writing was almost a compulsion for her, an obsession. A fire in her bones that she could not put out. Besides composing a memoir at the age of twenty-nine, she wrote hundreds of letters and kept a diary for at least two decades, filling as many as fifty volumes and fifteen thousand pages with her heartfelt prayers to God. More than two thousand pages of her manuscripts still survive.

Although Sarah did not know the formal rules of spelling, capitalization, or punctuation, she wrote with such raw power that her words seem to speak from the page. Rather than wasting time puzzling over where to put commas or periods, she wrote in a stream of consciousness style that anticipated later writers such as Virginia Woolf and James Joyce. Pouring out her thoughts in long, flowing sentences that spill into one another without a single pause or break, she recaptured the immediacy and intensity of her experiences. There are no white spaces on her pages, no moments of silence that invite readers to take a breath or collect their thoughts. Instead there is only her quiet, insistent voice telling story after story about the experiences that had shaped her understanding of God.

Sarah’s faith influenced every facet of her life: her understanding of suffering, for example, and her attitude toward slavery. It affected how she thought about her gender, how she spent her money, how she educated the children in her school, and how she coped with the loss of loved ones. Although she imagined God as too sovereign and mysterious to be fully grasped by the human mind, she searched for his presence in all her experiences, hoping to come to a deeper understanding of how he was directing her life. He was the Alpha and the Omega, the beginning and the end—the reason her life bore meaning.

From Sarah Osborn’s World by Catherine Brekus, published by Yale University Press in 2013. Reproduced by permission.

Catherine A. Brekus is Charles Warren Professor of the History of Religion in America at Harvard Divinity School. She lives in Auburndale, MA. 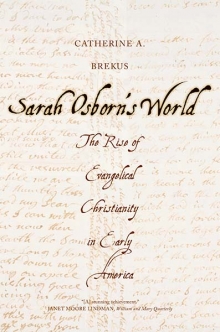