President Trump has been nothing if not unconventional. Time and again, he has upended traditions and institutions, blowing past those who say, “You can’t do that!” and replying, “I just did!” But in the process of upsetting so many apple carts, he is also teeing up an object lesson in a fundamental feature of American constitutional design: when it comes to the president, politics trump law.

This does not mean that the presidency is insulated from the law. Executive orders and other actions by the administration are subject to review in court. When the administration does unlawful things, the courts can issue injunctions against them. In a recent example, courts thwarted President Trump’s ban against travelers from certain Muslim countries.

But the president himself—in his personal capacity—has significant constitutional protection from the direct effects of the law. In the 1982 case of Nixon v. Fitzgerald, the Supreme Court ruled that the president is absolutely immune from civil liability for official actions. Regardless of how illegal the president’s action was or how much damage it caused the victim, that victim cannot ever sue the president, let alone win a case and recover damages from him.

The Supreme Court has never addressed the parallel question of whether the president is immune from criminal prosecution, either while in office, or at any time for his presidential actions. The Court’s silence here is telling; the issue has never arisen because no president has ever been indicted. The prosecutors pursuing Presidents Nixon and Clinton both restrained themselves from seeking indictments while their targets were still in office—partly for strategic reasons, but partly because it was not clear to them that they could have sought them even if they wanted to. (After leaving office, Nixon was pardoned; Clinton settled his criminal case on his last full day in office.)

How can it be that in a nation founded on the rule of law, anyone’s actions could be so insulated from legal consequences? Part of the reason is the structure of the presidency itself. As head of the executive branch, the president sits atop the federal prosecutorial hierarchy. The president can obtain the removal of the Attorney General, any U.S. Attorney, and—as a constitutional matter—probably any federal special prosecutor as well. As a practical matter, this means that a president determined to protect himself from federal prosecution has the power to do so.

For a state prosecutor to pursue criminal charges against the president would be problematic too, due to reasons of federalism. To test whether you agree with this proposition, ask yourself whether it would be constitutionally legitimate for a local prosecutor from the political party you oppose (who is answerable only to the voters in his county) to have a president from your political party arrested and indicted.

But there are two other important pieces of this puzzle as well—two checks and balances. The first is public opinion. Presidents are politically accountable. Indeed, they are really the only people politically accountable to the entire nation. The president might have the constitutional authority to have a special prosecutor removed, and he might have the legal ability to plead immunity to state criminal charges, but he would have to be willing to pay the political price for doing so. When President Nixon had Watergate Special Prosecutor Archibald Cox fired, he did so at tremendous political cost. As a result, there was really no way for him to remove Cox’s successor, Leon Jaworski.

Thus, if the president has done something truly criminal, or even something really bad that is technically not criminal, then Congress can hold him accountable. The Constitution did not give Congress this power because Congress is filled with the best legal minds in the country but, rather because as a body Congress is politically accountable to the nation. House members vote on impeachment, and senators vote on conviction knowing that they will be answerable to their constituents.

For the president to defeat an attempt to impeach and remove him, he must have sufficient political support—either half the House or one-third-plus-one in the Senate. As a practical matter, this has usually meant that the president must face bipartisan opposition before impeachment and removal can be effected.

This is why for all of the legal analysis about whether President Trump has obstructed justice, received unconstitutional emoluments, or anything else, the only judgments he will face while in office will be political ones. As long as he retains a minimum level of political support to fend off impeachment, he simply will not be held accountable for any laws he might have broken.

To paraphrase President Nixon, this effectively means that whatever the president does, if he retains enough political support that thirty-four senators don’t want to remove him, it isn’t illegal in any meaningful way while he’s in office. 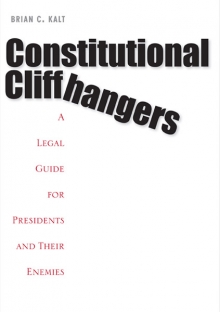