To the practiced eye, Einstein’s equations stand as the quintessence of mathematical beauty. When it was introduced in 1915, general relativity was hailed as a momentous conceptual achievement. But for a long time the theory had little practical importance. Although the scientific community embraced general relativity—and recognized Einstein for his genius—the evidence for it was largely aesthetic, because the tests possible in the early twentieth century were few: a tiny shift observed in the planet Mercury’s orbit and evidence of starlight bending around the Sun due to the indentation of space around the orb’s enormous mass. There was a perfectly good reason that experimental tests lagged behind theorists’ contemplation of relativity’s effects. In either describing the motion of a ball falling to the ground or sending a spacecraft to the Moon, Newton’s laws of gravity are still adequate. General relativity is far more subtle, best observed when gravitational fields attain monstrous strengths, making its effects more prominent. The nature in which we reside, which flows so nicely according to Newton’s laws, is actually a special case, where energies and velocities are relatively low. It is when energies get higher that nature begins to act as if it’s a character in Alice’s Adventures in Wonderland—the universe begins to look “curiouser and curiouser.” It’s a counterintuitive world, where lengths can contract, time can speed up or slow down, and matter can disappear in a wink down a space-time well.

But in Einstein’s day the universe was deemed far tamer than that. After the first few tests were completed—elevating Einstein to the pinnacle of celebrity—general relativity became largely a theoretical curiosity, admired by all but exiled into the hinterland of physics. “General relativists,” says Clifford Will, a relativist himself, “had the reputation of residing in intellectual ivory towers, confining themselves to abstruse calculations of formidable complexity.”

But like some theoretical Rip Van Winkle, general relativity gradually revived after decades of neglect, especially as astronomers came to discover a host of intriguing celestial objects, such as pulsars, quasars, and black holes, that could be understood only through the physics of general relativity. Neutron stars, gravitational lenses, inflationary universes—all must be studied with Einstein’s vision in mind. At the same time, advancing technology offered physicists new and ingenious means to test relativity’s quirky and subtle effects with unprecedented accuracy—and not just in the laboratory. Using planetary probes, radio telescopes, and spaceborne clocks as their tools, investigators have checked Einstein’s hypotheses with uncanny degrees of precision. The entire solar system now serves as general relativity’s laboratory. In the words of general relativity experts Charles Misner, Kip Thorne, and John Wheeler, from their book Gravitation, a veritable bible for workers in the field, “General relativity is no longer a theorist’s Paradise and an experimentalist’s Hell.”

For more than a century the theory has held up to every experimental test, which is not only a triumph for Einstein—a celebration of his accomplishment—but also a further example of nature’s ability to inspire awe and fascination in the way its rules follow such a precise mathematical blueprint. Furthermore, there are practical reasons why the theory is no longer relegated to the ivory tower. General relativity now has a real impact on our everyday lives. To operate properly the satellites of the Global Positioning System (GPS)—used regularly by hikers, mariners, commuters, and soldiers to keep track of their locations—requires corrections of Einsteinian precision, revisions unaccounted for by Newton’s cruder take on gravity. And astronomers who electronically link radio telescopes on several continents, creating a telescope as big as the world for their observations, also demand such accuracy

And yet the story of general relativity remained incomplete for quite some time. An unsettled question resided within general relativity, a major prediction that awaited many decades for direct confirmation: gravitational waves. To understand this phenomenon, imagine one of the most powerful events the universe has to offer—a supernova, the spectacular explosion of a star. More than 160,000 years ago, at a time when woolly mammoths were walking the Asian plains, a brilliant blue-white star now known as Sanduleak – 69° 202 exploded in the Large Magellanic Cloud, a prominent celestial landmark in the southern sky. Not until the winter of 1987, though, did a wave of neutrino particles and electromagnetic radiation shot from that dying star reach Earth. And when that blitz arrived, an arsenal of observatories around the world focused their instruments on the flickers of light and energy that represented the star’s long- ago death throes. It was the first time that astronomers were able to observe a supernova in our local galactic neighborhood since the invention of the telescope.

But Einstein’s theory suggests that, when Sanduleak – 69° 202 blew, it also sent out waves of gravitational energy, a spacequake surging through the cosmos at the speed of light. A fraction of a second before the detonation, the core of the star had been suddenly compressed into a compact ball some ten miles wide, an incredibly dense mass in which a thimbleful of matter weighs up to five hundred million tons (roughly the combined weight of all of humanity). This is the birth of what astronomers call a neutron star. Jolted by such a colossal stellar collapse, space itself was likely shaken—and shaken hard. The resulting ripples would have rushed from the dying star as if a giant cosmic pebble had been dropped into a spacetime pond. These gravitational waves, though growing ever weaker as they spread from the stellar explosion, would have squeezed and stretched the very fabric of space- time itself. Upon reaching Earth they would have passed right through, compressing and expanding, ever so minutely, the planet and all the mountains, buildings, and people in their wake.

As shown by the example of the Sanduleak star, gravity waves are generated whenever space is fiercely disturbed. These waves are not really traveling through space, say in the manner a light wave propagates; rather, they are an agitation of space itself, an effect that can serve as a powerful probe. Light beams are continually absorbed by cosmic debris—stars, gas clouds, and microscopic dust particles—as they roam the universe. Gravity waves, by contrast, travel right through such obstacles freely, since they interact with matter so weakly. Thus, the gravity-wave sky is vastly different than the one viewed by astronomers with telescopes. More than offering an additional window on space, gravity waves provide a radically new perception. In addition, they at last offered proof of Einstein’s momentous mental achievement—their very existence demonstrates, in a firm and vivid way, that space-time is indeed a physical entity in its own right.

From Einstein’s Unfinished Symphony by Marcia Bartusiak, published by Yale University Press in 2017. Reproduced by permission.

Marcia Bartusiak is professor of the practice, graduate program in science writing, Massachusetts Institute of Technology, and the award-winning author of six previous books, including most recently Black Hole. 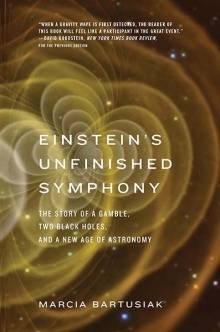