"South Monterey Bay" by Seano1, licensed for use at Wikimedia Commons.

As the sun rose on July 7, 1846, four U.S. warships rode at anchor in Monterey Bay. Ashore, the Mexican tricolor cracked over the adobe walls and red-tiled roofs of California’s capitol for the last time. At 7:30 a.m., Commodore John Sloat sent Captain William Mervine ashore “to demand the immediate surrender of the place.” The Mexican commandant then fled, and some 250 sailors and marines assembled at the whitewashed customs house on the water’s edge. As residents, immigrants, seamen, and soldiers looked on, Mervine read Commodore Sloat’s proclamation: “I declare to the inhabitants of California, that although I come in arms . . . I come as their best friend—as henceforth California will be a portion of the United States, and its peaceable inhabitants will enjoy the same rights and privileges as the citizens of any other portion of that nation.” As the U.S.S. Savannah’s sailors and marines hoisted the Stars and Stripes to a chorus of cheers, three ships of the U.S. Pacific Squadron fired a sixtythree-gun salute. The cannons’ roar swept over the plaza to the pine-studded hills above the bay before echoing back over the harbor. The first hours of conquest were relatively peaceful, but a new order had come to California. The lives of perhaps 150,000 California Indians now hung in the balance.

The U.S. military officers who took control of California that July under martial law had the opportunity to reinvent the existing Mexican framework within which colonists and California Indians interacted. Instead, these officers reinforced and intensified existing discriminatory Mexican policies toward these Indians. The elected civilian state legislators who followed them then radically transformed the relationship between colonists and California Indians. Together with federal officials, they created a catastrophe.

Yet, the California Indian population cataclysm of 1846–1873 continued a preexisting trajectory. During California’s seventy-seven-year-long Russo-Hispanic Period (1769–1846) its Indians had already suffered a devastating demographic decline. During the era when Spaniards, Russians, and Mexicans colonized the coastal region between San Diego and Fort Ross, California’s Indian population fell from perhaps 310,000 to 150,000. Some 62,600 of these deaths occurred at or near California’s coastal region missions, and, in 1946, journalist Carey McWilliams initiated a long debate over the nature of these institutions when he compared the Franciscan missionaries, who had held large numbers of California Indians there, to “Nazis operating concentration camps.” Today, a wide spectrum of scholarly opinion exists, with the extreme poles represented by mission defenders Father Francis Guest and Father Maynard Geiger, on the one hand, and mission critics Rupert and Jeannette Costo—who called the missions genocidal—on the other. However one judges the missions, Russo-Hispanic colonization caused the deaths of tens of thousands of California Indian people.

Under U.S. rule, California Indians died at an even more astonishing rate. Between 1846 and 1870, California’s Native American population plunged from perhaps 150,000 to 30,000. By 1880, census takers recorded just 16,277 California Indians. Diseases, dislocation, and starvation were important causes of these many deaths. However, abduction, de jure and de facto unfree labor, mass death in forced confinement on reservations, homicides, battles, and massacres also took thousands of lives and hindered reproduction. According to historical demographer Sherburne Cook, an often-quoted authority on California Indian demographic decline, a “complete lack of any legal control” helped create the context in which these phenomena were possible. Was the California Indian catastrophe just another western U.S. tragedy in which unscrupulous individuals exploited the opportunities provided in a lawless frontier?

The organized destruction of California’s Indian peoples under U.S. rule was not a closely guarded secret. Mid-nineteenth-century California newspapers frequently addressed, and often encouraged, what we would now call genocide, as did some state and federal employees. Historians began using these and other sources to address the topic as early as 1890. That year, historian Hubert Howe Bancroft summed up the California Indian catastrophe under U.S. rule: “The savages were in the way; the miners and settlers were arrogant and impatient; there were no missionaries or others present with even the poor pretense of soulsaving or civilizing. It was one of the last human hunts of civilization, and the basest and most brutal of them all.” In 1935, U.S. Indian Affairs commissioner John Collier added, “The world’s annals contain few comparable instances of swift depopulation—practically, of racial massacre—at the hands of a conquering race.” In 1940, historian John Walton Caughey titled a chapter of his California history “Liquidating the Indians: ‘Wars’ and Massacres.” Three years later, Cook wrote the first major study on the topic. He quantified the violent killing of 4,556 California Indians between 1847 and  1865, concluding that, “since the quickest and easiest way to get rid of [the Northern California Indian] was to kill him off, this procedure was adopted as standard for some years.”

In the same year that Cook published his groundbreaking article, Nazi mass murder in Europe catalyzed the development of a new theoretical and legal framework for discussing such events. In 1943, legal scholar Raphaël Lemkin coined a new word for an ancient crime. Defining the concept in 1944, he combined “the Greek word genos (tribe, race) and the Latin cide,” or killing, to describe genocide as any attempt to physically or culturally annihilate an ethnic, national, religious, or political group. The 1948 United Nations Convention on the Prevention and Punishment of the Crime of Genocide more narrowly defined genocide as “acts committed with intent to destroy, in whole or in part, a national, ethnical, racial or religious group, as such.”

Most Americans knew little about the concept of genocide or the Holocaust until the late 1950s. A turning point came in 1961. That year, the media glare illuminating the trial of S.S. lieutenant colonel Adolf Eichmann—in combination with the release of the Academy Award–winning legal thriller Judgment at Nuremberg and the publication of political scientist Raul Hilberg’s monumental The Destruction of the European Jews—introduced the scope and horrors of the Holocaust to many in the United States. Holocaust-related art, literature, media, and scholarship proliferated during the late 1960s and 1970s. Those turbulent decades also saw continuing civil rights activism, New Left historians’ assault on triumphal US history narratives, rising American Indian political activism, emerging Native American studies departments, and a new American Indian history that emphasized the role of violence against indigenous people.

Twenty-five years after the formulation of the new international legal treaty, scholars began reexamining the nineteenth-century conquest and colonization of California under US rule. In 1968, author Theodora Kroeber and anthropologist Robert F. Heizer wrote a brief but pathbreaking description of “the genocide of Californians.” In 1977, William Coffer mentioned the “Genocide of the California Indians,” and two years later, ethnic studies scholar Jack Norton argued that, according to the Genocide Convention, certain northwestern California Indians suffered genocide under US rule. In 1982, scholar Van H. Garner added that “Federal Indian policy in California . . . was genocidal in practice.” Historian James Rawls next made a crucial intervention. He argued that some California whites openly “advocated and carried out a program of genocide that was popularly called ‘extermination.’” Following Rawls’s important equation of the nineteenth-century word extermination with the twentieth-century term genocide, anthropologist Russell Thornton went further. In his landmark book addressing genocide in the continental United States as a whole, Thornton argued that “the largest, most blatant, deliberate killings of North American Indians by non-Indians surely occurred in California.” Historian Albert Hurtado later described an “atmosphere of impending genocide” in gold rush California, while historian William T. Hagen asserted, “Genocide is a term of awful significance, but one which has application to the story of California’s Native Americans.”

From An American Genocide by Benjamin Madley, published by Yale University Press in 2017. Reproduced by permission.

Benjamin Madley is associate professor of history, University of California, Los Angeles, where he focuses on Native America, the United States, and genocide in world history. He lives in Los Angeles, CA. 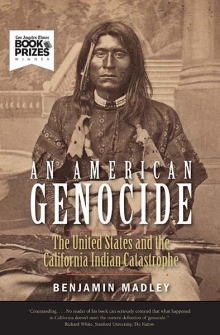