"Bruce McCandless in Space," licensed for use on the public domain by NASA.

In the 1960s, Americans were clear about the reasons to embark on travel across the vast new ocean of space. More than once, President John F. Kennedy presented a clear and compelling rationale, best distilled in a speech delivered at Rice University on September 12, 1962. Near the dawn of the space age, in the midst of the cold war rivalry with the Soviet Union, he pronounced that leadership in the exploration of space was tantamount to global leadership, not only in science and technology but more critically in freedom and peace. Seeing that space exploration was inevitable, he stated emphatically that “we intend to be first . . . and to become the world’s leading space-faring nation,” because “only if the United States occupies a position of pre-eminence can we help decide whether this new ocean will be a sea of peace or a new terrifying theater of war.”

Kennedy’s clarion call—“We choose to go to the Moon”—reverberates during this centennial year of his birth as one of the most significant utterances of his short presidency. In the geopolitical arena, American movement into space matched and soon outshone Soviet activity. But surpassing the Soviets was only part of Kennedy’s aim; he intended also to inspire “the best of our energies and skills” to meet that challenge and any others “not because they are easy, but because they are hard,” and he sought to galvanize Americans to a level of patriotic commitment comparable to that during World War II, awakening industry, politicians, and citizens at large to meet another challenge to achieve greatness.

Now, fifty-five years later, this decisive call to action in space seems rather quaint, so little soaring eloquence has lately challenged the nation to leadership on earth or in space. The era of the missions to the moon fades into memory, seen by many as a golden age unlikely to be surpassed any time soon. The United States has not sent astronauts beyond low earth orbit since 1975—long enough for people born during the 1960s to become senior citizens.

True, the space shuttles operating from 1981–2011 took a few hundred people into space on their 135 missions, and the International Space Station has been continuously occupied by astronauts and cosmonauts since the year 2000. But the rationales for these missions were not motivationally equivalent to those for the lunar missions. Human spaceflight in low earth orbit has been justified as a utilitarian activity, an opportunity to do useful things like scientific research, satellite delivery and repair, and technology development. These missions have sought to use space, not to explore it. Both the shuttle and the space station have helped prepare for eventual resumption of human spaceflight farther from our home planet, but the timeline for such forays has continued to slip into the future.

In the meantime, robotic orbiters, probes, landers, and rovers have traveled throughout the solar system with great success as agents of exploration and discovery. These spacecraft and the teams on the ground who track, monitor, and command them, as well as the scientists who analyze and explain their data, are today’s true space explorers. From them come vast collections of information, new knowledge and understanding, and scores of new questions about our neighboring worlds. So, too, do the great telescopes and their observing teams who fix their gazes farther into the universe.

Now emerging are new enterprises on the verge of embarking on human spaceflight. Both long-established companies like Boeing and Lockheed Martin and newcomers like Virgin Galactic, SpaceX, Blue Origin, and Sierra Nevada aspire to transport passengers into space on missions ranging from suborbital hops to space station commutes, the moon, and possibly Mars. Their primary rationale is to develop a market for spaceflight by making space travel more economical and more accessible to more people, thereby democratizing spaceflight. Some flights will have practical purposes, such as space station crew exchanges, but the real target market is space tourists—people who will pay to go into space for the sheer adventure of experiencing weightlessness and enjoying the views. As the use of boats and ships, automobiles, and airplanes evolved from practical needs to pleasure travel, the technology of spaceflight is moving in that direction, too. If all goes well in the next few years, at least one of these companies, and probably several, will move into commercial spaceflight operations for paying passengers.

Advocates for human spaceflight today no longer posit global leadership or the inspirational challenge of attempting the impossible. Practical reasons have yielded some of the anticipated results, but utilitarian spaceflight has not had a strong emotional appeal for a public that has been largely unaware of the shuttle and space station. The coming rationale for spaceflight as an ultimate vacation adventure may appeal to the very wealthy, but access for ordinary folk likely will be a long time coming. Another reason for human spaceflight, often discussed by futurists, is to become an interplanetary species to ensure the survival and spread of humanity in case of a cataclysm that destroys earth or makes it uninhabitable. This latter rationale raises many interesting philosophical questions about the future of the human race and the nature of an off-the-earth society.

As the Apollo missions to the moon become more distant, the fate of future human spaceflight arguably belongs to the wealthy entrepreneurs who are trying to turn their dreams of space travel into viable businesses. As for spaceflight conducted by NASA, a low level of public support translated as budget dollars has held steady for decades, suggesting that Americans think the nation should be involved in human spaceflight, but not as one of its highest priorities or largest expenditures. Might a crisis of some sort—either geopolitical or existential—nudge that complacency into urgency some day? That is an unanswerable question today, but one worthy of speculation.

Valerie Neal is the chair of the space history department at the Smithsonian National Air and Space Museum, a role that includes overseeing the Human Spaceflight collections from the Space Shuttle and International Space Station programs. Her previous books include Discovery: Champion of the Space Shuttle Fleet. 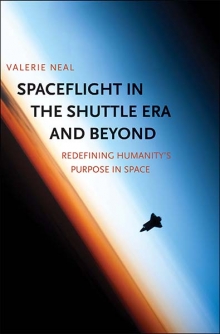