"A Rebel Guerrilla Raid in a Western Town," by Thomas Nast, licensed for use on the public domain by Wikimedia Commons.

They called him “The Hero of the Southwest.” John R. Kelso, an officer in the Missouri State Militia cavalry, gained regional fame during the Civil War for battling Southern guerrillas, and stories about his bravery and daring spread. Friend and foe alike marveled at what one reporter called “the fearless and energetic manner in which Kelso had hunted down the bandits, frequently penetrating their most secret hiding places and engaging them in hand-to-hand conflicts.” Kelso performed “so many acts of daring adventure in Southern and Southwest Missouri during the war” and “was so much talked about by the Unionists and secessionists . . . on account of the numerous victims upon whom his avenging hands had fallen,” according to a fellow officer. Kelso vowed to kill twenty-five rebels with his own hands. He fulfilled his vow, and his supporters elected him to Congress in 1864.

For over a century and a half, the vicious guerrilla warfare in Civil War Missouri has haunted American history. The war’s famous battles, with huge armies slaughtering each other in American fields and forests—Gettysburg, Chickamauga, Chancellorsville, and so many others—were certainly horrific. But the more intimate and unbounded brutality of guerrilla warfare makes the blood run cold. Gangs of men on horseback, formerly peaceable farmers, rode at night to pillage and burn and gun down their unarmed neighbors in cornfields and country lanes. The violence began even before the war as pro-slavery “Border Ruffians” and free soil “Jayhawkers” ravaged prairie lands between Missouri and Kansas. It continued throughout the war as pro-Confederate guerrillas harassed Federal troops and state militia and terrorized citizens who supported the Union.

Confederate-allied guerrillas—men such as Bloody Bill Anderson, who executed two dozen men pulled from a train in Centralia, Missouri, and William Quantrill, who led a band that murdered 150 civilians in Lawrence, Kansas—have garnered the most attention. Were they psychopaths or sociopaths, murdering for fun?  Criminals simply exploiting the breakdown of law and order? Angry bankrupts who had gambled and lost on the Confederacy in Missouri?  Merely men who considered themselves patriots, defending their families? The Missouri Unionists who fought the Confederate guerrillas have been more elusive. Historians sometimes describe Union soldiers, hampered by bumbling bureaucrats in blue and by the constraints of conventional warfare, as being flummoxed by “bushwhackers” who would strike quickly and then disappear into the Ozark Mountains.

The memoir of John R. Kelso challenges this characterization with an extraordinary view from within what was, in effect, a potent counterinsurgency force. Kelso saw the war in Missouri from several perspectives.  As the war began in the spring of 1861, he served as an officer in the hastily assembled Home Guard militias. Next he was an infantryman, marching across the state to the decisive Battle of Pea Ridge in early 1862. He also traveled alone in enemy territory, a spy in disguise as a Confederate recruiter. But he made a name for himself as a lieutenant and then a captain in the 14th and then 8th cavalry regiments of the Missouri State Militia, fighting bushwhackers, guerrillas, and pro-Southern outlaws who terrorized southwest Missouri.

Kelso and his men adapted to the various threats they faced. Against military targets such as a saltpeter mine (for making gunpowder), they rode out in force, with eighty men on horseback.  Against smaller bands of guerrillas, Kelso led much smaller squads, and sometimes even infiltrated rebel camps alone. Like their enemies the cavalry rode at night, or kept to the woods rather than the roads. Like the men they hunted, they often disguised themselves: even as Southern guerrillas would sometimes dress in the blue uniforms they stripped from the bodies of the Union dead to confuse their pursuers, Kelso and his men would dress as bushwhackers or Confederates to take the enemy by surprise. Like the guerrillas, too, they often shot first and asked questions later.

It is always difficult to defend against guerrilla warfare. Small groups of fighters appear suddenly, strike quickly, and then disappear back into the civilian population.  But the 14th and 8th M.S.M. cavalry regiments had some important successes. Kelso and his men, as regional commander General Samuel R. Curtis noted, were well suited to the difficult task.

Kelso himself became something of a folk hero among Missouri Unionists. Confederate sympathizers in Missouri—and there were many—hated him as a cruel monster who acted on the premise that all rebels were traitors who deserved death. Both sides wondered what drove him. His private writings reveal a portrait of a complicated man with complex motivations. As the war began, he stood before his hostile pro-secession neighbors to voice a commitment to the Union as a beacon of freedom. But when pro-Confederate neighbors stole his property, burned down his house, and drove his family and the families of other loyal friends into the bitter cold to suffer (and some of them to die), Kelso also became motivated by personal revenge. He acknowledged, too, that ambition to gain glory in battle motivated him. After the Emancipation Proclamation had added the abolition of slavery to preserving the Union as a war aim, Kelso came to see slavery as the center of the contest–slavery as the utter denial of the ideal of political equality expressed in the Declaration of Independence. The guerrillas he hunted, he thought, were motley bands of traitors and criminals who were doing dirty work in a bad cause.

Like many soldiers in more recent counterinsurgency efforts, Kelso left the battlefield with many scars. A shotgun blast partially crippled his left hand, and being crushed by his horse left him with a bad shoulder and injured pelvis that never quite healed. Toward the end of his life, too, Kelso reevaluated the war and his role in it. Seeing an America by the last decade of the nineteenth century riddled with corruption and ruled by an oligarchy of large corporations, Kelso bitterly regretted his wartime exploits. What he had once thought of as patriotic heroism he now considered a misguided righteousness of the most dangerous kind, a blindness that led to state-sanctioned destruction and slaughter. He came to believe that the guerrillas he had hunted—brave but misguided—were not all that different from himself.

Christopher Grasso is a professor of history at the College of William and Mary. He lives in Williamsburg, VA. He is completing a biography of Kelso for Yale University Press: Teacher, Preacher, Soldier, Spy: The Civil Wars of John R. Kelso. 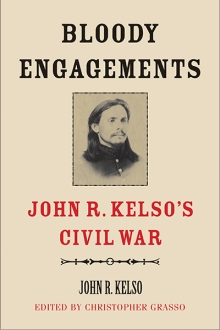