The writer, editor, poet, and political activist Max Eastman (1883-1969) helped shape the dominant intellectual trends of the early twentieth century. He knew personally the most important minds of his time and corresponded with the ones he didn’t know. The son of two progressive ministers, Max grew up surrounded by people with strong views about social justice and civil rights. Following in his mother’s footsteps and with his sister Crystal as an ally, he began campaigning for women’s suffrage, becoming one of the most sought-after speakers at suffragist rallies. After he left Columbia University, where he had been a student of John Dewey, without formally submitting his dissertation on Plato, he soon made his mark as an editor of The Masses and, subsequently, The Liberator. Eastman became one of the most important radical voices in the United States during the years leading up to and following World War I.

A prolonged stay in Moscow and on the coast of the Black Sea convinced Max that a better society could not be achieved by ideology but by scientific “engineering” (a promise embodied by Lenin and betrayed by Stalin). Through his 1924 marriage to Eliena Krylenko, Eastman became the brother-in-law of Nikolai Krylenko, the former commander of the Red Army and later Stalin’s minister of justice. Eastman was fluent in Russian, translated Trotsky, and remained, for more than four decades, one of the most active commentators on Russian affairs in the United States. He continued to write poetry, produced and narrated one of the first and enduringly important political documentaries (From Tsar to Lenin, 1937) and created and hosted one of the first successful radio quiz shows. After he published a frank account of his life, Enjoyment of Living (1948), critics hailed him as the Alfred Kinsey of autobiography. And he continued to have the nation’s attention: in 1959, for example, he told Mike Wallace, in a widely discussed television interview, that the word “God” had no meaning for him. With his third wife, the social worker Yvette Székely, he retreated to his island refuge on Martha’s Vineyard, from where he continued to attack what he believed to be American indifference to Russian totalitarianism.

Shunned or criticized by many of his former friends on the Left, the proudly atheistic Eastman was never fully embraced by conservatives either. He wrote for Reader’s Digest and, occasionally, for the National Review. Yet he insisted that he had in fact never changed his views; the century around him had changed instead, he said, and terms such as “left” and “right” had lost their significance.

During summers spent at Glenora, an alternative community on Lake Seneca, NY, where residents shared both labor and leisure, Max and his friends discovered the delights of nude swimming and the exhilarating perils of competitive diving, an experience that erased traditional gender differences. Photographs, such as the one above, show Max and a female friend (likely Ruth Pickering) experimenting with the “Double Breakneck,” a jump copied, according Eastman’s note, from “A.K”—the Australian champion swimmer Annette Kellerman (1886-1975), inventor of the one-piece swimming suit, later a frequent guest at Max and Crystal’s Greenwich Village apartment.

Kellerman, of all people, was still on his mind when, two decades later, Eastman found himself in Sigmund Freud’s consultation rooms at Berggasse 19 in Vienna. He had just returned from Russia thoroughly disenchanted with communism. But he still believed that Freudian theory could supply what materialism couldn’t: a cold hard look at the motivations of human thought and behavior, which would be of great help in the grand project of “social engineering” that Lenin had initiated. We know what Freud and Eastman talked about during their 1927 meeting, since Eastman held on to his notebook. In a particularly tense exchange, after Eastman had defended the original idea of Bolshevism as a “method for producing liberty—a real liberty,” Freud began to make gestures as if he were Eastman’s swimmer friend from down under, moving “both hands as though he were swimming an Australian crawl.” Eastman realized that Freud was laughing about him: “People who are going to produce liberty sometime in the future are just the same for me as people who are going to give it to you in the celestial paradise.” The memory of that laugh would haunt Eastman for the rest of his life.

Eastman died on March 26, 1969, in Barbados, after suffering a massive stroke.  At a memorial ceremony on May 19 in New York, one of the main speakers was Roger Baldwin. A co-founder, with Crystal Eastman, of what later became the ACLU and a neighbor on the Vineyard, Baldwin had been one of his allies when Eastman was still firmly on the left. Clearly moved and speaking extemporaneously, Baldwin evoked the many causes to which Eastman had contributed, from women’s rights to anti-militarism. And he recalled his long friendship with Max Eastman, untroubled by their later political disagreements, buoyed by a common delight in life and the many pleasures it had offered them.

Drawing on Eastman’s vast archive of unpublished poems, journals, manuscripts, notes and photographs, Max Eastman: A Life evokes the pleasures as well as the challenges faced by a man Time magazine once aptly celebrated as the “lusty lion of the left.”

Christoph Irmscher is Provost Professor of English, George F. Getz, Jr., Professor in the Wells Scholars Program, and director of the Wells Program at Indiana University, Bloomington. He lives in Bloomington, IN. 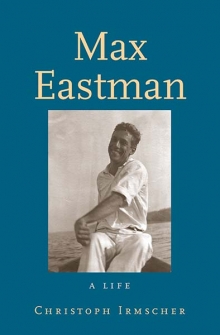