"The Death of General Mercer at the Battle of Princeton," licensed for use on the public domain by Wikimedia Commons.

Alexander Hamilton was barely out of his teens when he mounted his swashbuckling defense of the Continental Congress in 1774. If colonists failed to stand up to Parliament, he told his fellow New Yorkers, before long their “tables, and chairs, and planters, and dishes, and knives and forks, and everything else would be taxed.” Britain would soon tax colonists “for every child you got, and for every kiss your daughter received from their sweet-hearts, and God knows, that would soon ruin you.”

Hamilton was as enthusiastic about women as he was about politics, and it’s easy to imagine the distress a hypothetical tax on kisses might have caused the young radical. But his fears were based on more than just opposition to taxation without representation. They stemmed from his belief that an unaccountable legislature would tax the colonies into oblivion. To Hamilton and his fellow American revolutionaries, the problem wasn’t big government but narrowly self-interested government. Parliament’s taxes promised to transform a prospering political community based on reciprocity and exchange into an empire of domination and extraction.

Taxes could provoke such fears because they were—as they still are—both the lifeblood of the state and an instrument of power in their own right. They paid for armies and infrastructure, bureaucracies and public debt. They also shaped the economy, influencing the goods people made and bought. In so doing, taxation could either promote equality or entrench dominance. With so much at stake, taxes like the Stamp Act and Townshend Duties provoked a fierce debate over the legitimacy of Britain’s imperial rule.

America in the 1770s was increasingly an unequal and anxious society. Yet it was not a bad economy that caused the American revolution. Rather, colonists revolted against an empire whose leaders made no secret of their commitment to taxes and trade regulations that promised to enrich a small elite while harming colonists’ well-being. Such policies would reduce their economy to the same impoverished condition as Ireland and India.

Supporters of colonial taxation on both sides of the Atlantic disagreed. And although they were fiercely committed to authoritarian imperial reforms that would eventually split the British Empire, they were neither villainous nor stupid. They were, however, committed to a distinct vision of politics. Champions of austerity, hierarchy, and order, they sought to remodel government both at home and in the colonies. Advocates of imperial taxation had personally faced the violence of crowds and the insubordination of colonists, and they had an understandable fear that the economic and social changes transforming their empire would make both freedom and government impossible. They grew increasingly concerned as they watched their country’s debts spiral upward while politicians appealed to the mob. Britain had a choice, they concluded: cut spending and raise taxes on the colonies or face collapse.

While these views led many British conservatives to push for new colonial taxes and stronger imperial governments, it would be a mistake to see austerity and colonial taxation as quintessentially English. Many eighteenth-century French and Spanish leaders shared these views, and British supporters of colonial taxation only really succeeded in grabbing the reins of government in the 1770s. Indeed, many of Parliament’s sharpest critics were themselves giants of British political life. William Pitt, Richard Price, and countless other statesmen, intellectuals, and activists insisted that British interests and rights were the same in Boston as they were Birmingham. Committed to a more equal empire, they marshalled their political and intellectual energies in dozens of speeches and pamphlets. They argued that colonial taxation meant not only fewer customers for Britain’s factories but tyranny for its subjects. When the war finally came, their sympathies were often with the rebellious American colonists rather than with their own government.

British enthusiasm for American rebellion demonstrates that the revolution was as much a clash of ideas as it was a clash between two countries. Those ideas had enormous consequences. They not only shaped the contours American government; they enshrined its commitment to the “general welfare.”

The legitimacy of the British Empire in America depended on its promise of freedom and prosperity, on being “an empire of liberty.” American independence was ultimately a response to an emerging political economic system that seemed to many colonists increasingly exploitative and cruel. Despite his objection to Parliament’s taxes, Hamilton was no enemy of government. He and his fellow revolutionaries only declared their independence after they reluctantly concluded that Britain’s empire of liberty no longer deserved its name.

In its place, America’s revolutionaries created a new, republican empire that offered a brighter future for its citizens. While tainted by bigotry and slavery, America’s new governments promoted immigration and infrastructure, wealth and knowledge. In our own age of inequality and alienation, that vision of politics offers a roadmap for the future. But it also issues a stark warning. Governments that ignore the relationship between liberty and shared prosperity do so at their peril.

Justin du Rivage received his Ph.D. from Yale and previously taught early American history at Stanford. He lives in London. 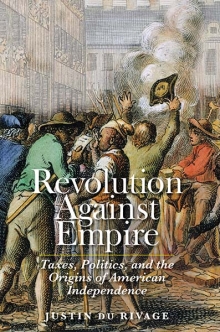