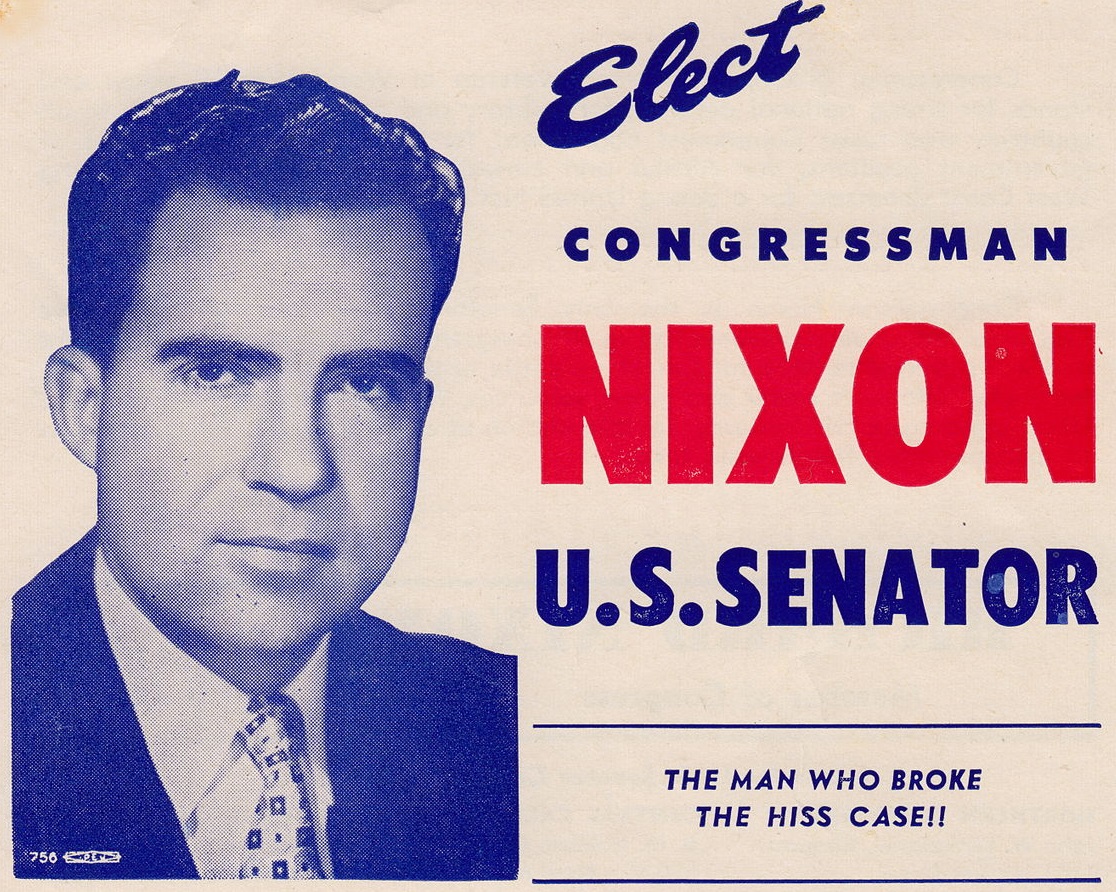 The state of current scholarship on Richard Nixon requires me to state, at the outset, that I am neither for nor against him. My purpose in writing The Contender was never to boost Nixon’s historical reputation—nor to depress it—but rather to provide the basis on which any such reevaluation must be built. I hoped to write, to the extent that the written record and my own abilities allow, an accurate chronicle of this very interesting and complex man’s early life and career in Congress. Before we can begin to discern the larger historical meaning of events or embark on the always fraught task of attempting moral judgments, we need some reliable knowledge of what those events were: the things various people actually did and said and what in fact happened.

I did not begin as a Nixon advocate; far from it. Like many academics, I did not have a positive opinion of him. But neither was I a Nixon hater. What drew me to the subject was that I had written extensively on Franklin D. Roosevelt and had examined a large amount of material written by Democrats. I had not seen a similar amount of data from a Republican perspective. What I discovered in my research was that no one had carefully explored Nixon’s rich collection. In spite of this, many had written their personal judgments based on erroneous assumptions without reviewing essential documentation.

When The Contender was released, in the summer of 1999, I anticipated controversy, but the amount of hostility and the reasons for it surprised me. Although most reviewers discussed the merits of my arguments, a vocal minority saw nothing to be gained from any analysis of Nixon’s congressional career. I was castigated as a revisionist because I based my account of his rise on the extensive documentation in his own manuscripts, and in many other collections, and because I used that written record to challenge and correct a wide variety of factual and interpretative errors.

The energetic novice politician who emerged from those records, whom a significant number of Californians had found immensely appealing, is hard to reconcile with the darkly paranoid figure of the Watergate years that dominates popular imagination. Nixon was controversial even before then, of course, but I believe the stain of Watergate makes him ineligible, in many people’s minds, for the reassessment normally applied to historical figures over time. For some, the ineligibility even extends to corrections of fact.

Most of the dubious statements later accepted as true were first conjured up by Nixon’s political opponents. For example, Roger Morris, in his 1990 account of Nixon’s early career, charged that the Committee of 100, formed to support Nixon’s first run for Congress in 1946, was composed of millionaires who secretly bankrolled his campaign. (Morris never explains how he uncovered this “secret.”) In fact, the committee included a wide variety of Republicans, mostly small businessmen and partisans, who passionately championed the defeat of Nixon’s opponent, the five-term Congressman Jerry Voorhis. Nixon’s campaign did not depend on massive amounts of secret funding; he received contributions from many supporters and also put up his own money.

The reasons Nixon won were not mysterious. He began running against Voorhis in January 1946; the congressman did not start campaigning until late September. Nixon’s and Voorhis’s documents alike demonstrate that Nixon did not conduct a dirty campaign against the incumbent; he had no need to do that. Voorhis was an awful candidate. Even during the month or so Voorhis spent actively campaigning, he did not particularly exert himself. The charges that Nixon employed nefarious means to defeat him—for instance, that Nixon activists phoned voters and told them Voorhis was a Communist—came long after the results were in and were never credibly verified. The idea that Nixon did something unsavory to secure his victory was persuasive to those who took it as a given that he was too unpopular to win on his own, but it does not emerge from the record.

Upon entering Congress in January 1947, Nixon quickly declared himself an internationalist, unlike many in his party. Six months later, as a member of the House Select Committee on Foreign Aid (better known as the Herter Committee), he traveled to Western Europe to help assess the physical damage caused by World War II and the need for United States assistance. This led to the Marshall Plan and the Truman Doctrine, both of which Nixon enthusiastically championed. As a member of the Education and Labor Committee, he helped to draft the Taft-Hartley Act, which restricted union activities. He voted for it, and after Truman vetoed the bill, Nixon joined the overwhelming majority who overrode the veto.

His efforts on the House Committee on Un-American Activities (HUAC) drew, by far, the most headlines. Many authors have particularly condemned him for his role in investigating the Hollywood Ten—a group of prominent individuals from the movie industry who were publicly attacked for past Communist involvement and forced to appear before HUAC, and who refused to testify, went to prison, and were later blacklisted—even though Nixon had not participated. He was in Europe with the Herter mission at the time of the hearings.

Many of Nixon’s adversaries accused him of “Red baiting” and saw him as a clone of Senator Joseph McCarthy. Fawn Brodie, in Richard Nixon: The Shaping of His Character (1981), claimed: “McCarthy was Nixon in caricature, Nixon out of control, Nixon turned nihilist.” Many authors depend on Brodie for their portraits of the Nixon-McCarthy relationship, but there were vast differences between the two men. Nixon never made the wild, scattershot accusations of Communist infiltration that got McCarthy so much press. Nixon targeted those who admitted they had Communist connections.
For decades, the prime exhibit for accusations that Nixon did target the innocent was his investigation of Alger Hiss, whom he exposed as a Communist in the summer of 1948. Hiss was later convicted of perjury (the statute of limitation had run out on spying) and served time in a federal prison. He vehemently denied the charge for the rest of his life, and his defenders alleged that Nixon had maliciously persecuted Hiss to further his own political career.

The debate over Hiss’s guilt or innocence remained unresolved during his and Nixon’s lifetimes, but with the collapse of the Soviet Union and the release of some of its intelligence records, evidence mounted that Hiss had been a Soviet spy. Any remaining doubt evaporated in 2010 with the publication of Spies by John Haynes and Harvey Klehr, two of the premier scholars of Soviet espionage. They used documents furnished by coauthor Alexander Vassiliev, a former KGB officer, to show conclusively that Hiss had been a Soviet asset, under the code name “ALES.” Even Hiss’s most ardent surviving defenders have stopped trying to exonerate him.

The national attention Nixon received for his role in the Hiss affair encouraged him to run for the Senate in 1950. Once again he faced a weak opponent, Congresswoman Helen Gahagan Douglas. Documents from the Nixon collection as well as the Douglas papers at the University of Oklahoma show that the congresswoman represented the extreme left of the Democratic Party and was unable to unite the rest of the party behind her. She ran a poorly organized campaign with inadequate funding and did not appeal to a large enough bloc of Democratic voters. Nixon won by over twenty percentage points, the largest margin of victory in any Senate race that year.

The obvious explanation for this outcome—that Nixon was the better-organized and better-known candidate—did not satisfy Douglas’s supporters. Once again he was accused, after the fact, of running a dirty campaign. He allegedly stated publicly that Douglas was “pink right down to her underwear,” a charge that is repeated in many books and articles even though it does not appear, as far as I can tell, in any contemporary accounts of the campaign. The quote does appear as a private utterance. In a 1972 memoir, Back When It All Began, William Arnold, the campaign’s public relations specialist, has Nixon saying it as he entered his hotel room after being told that Douglas had said something nasty about him. But Nixon never publicly referred to his adversary as “pink” or called her a Communist. He did question her judgment, and he approved of the “pink sheet,” a campaign flyer printed on pink paper that compared Douglas’s voting record to that of the far-left Congressman Vito Marcantino. Democrats called this a dirty tactic but did not comment on Douglas’s newspaper advertisements, which compared Nixon to Mussolini, Hitler, and Stalin. In fact, this campaign was highly emotional and occasionally unsavory on both sides, but not outside the norm for this era or most other eras in American history.

My new edition of The Contender: Richard Nixon, the Congress Years, 1946-1952 ends with the events leading up to the 1952 Republican national convention. Nixon went to Chicago for the platform committee deliberations, then flew to Denver to join the California delegation’s train, which was heading back to Chicago. While on this trip, Nixon discussed the possible presidential nominees with Governor Earl Warren and others. Nixon correctly concluded that the battle for the nomination would be between General Dwight Eisenhower and Ohio Senator Robert Taft.

Some writers later claimed that Nixon tried to stage a revolt on the train against favorite son Warren by asking the delegates to vote for Ike. This charge is baseless. Warren had won the California primary, and state law required the delegates to vote for him unless he released them to vote as they preferred. He never did, and in the convention’s first ballot he came in third behind Eisenhower and Taft. Ike then appointed Warren the chief justice of the United States.

If you read the new paperback edition, take into consideration that nobody knew what was coming. The nation had emerged from World War II as the world’s only superpower with the atom bomb, but within months of the armistice, America faced new challenges from the Soviet Union and international Communism. The Cold War would continue for decades; the Nixon presidency and Watergate did not yet exist. The Nixon of these years was young, determined, idealistic, hopeful, and in just the first stage of his meteoric rise to power.

From The Contender: Richard Nixon, the Congress Years, 1946-1952 by Irwin F. Gellman, published by Yale University Press in 2017. Reproduced by permission.

Irwin F. Gellman is an independent scholar and the author of five books on American presidents. He lives in Parkesburg, PA. 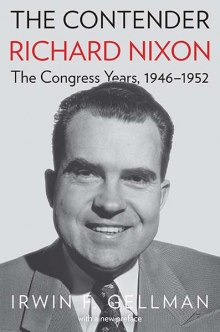 Featured Image: “Flyer/handout for Nixon for Senate campaign, 1950,” licensed for use on the public domain by the Richard Nixon Presidential Library and Museum, 1950 Campaign archives.