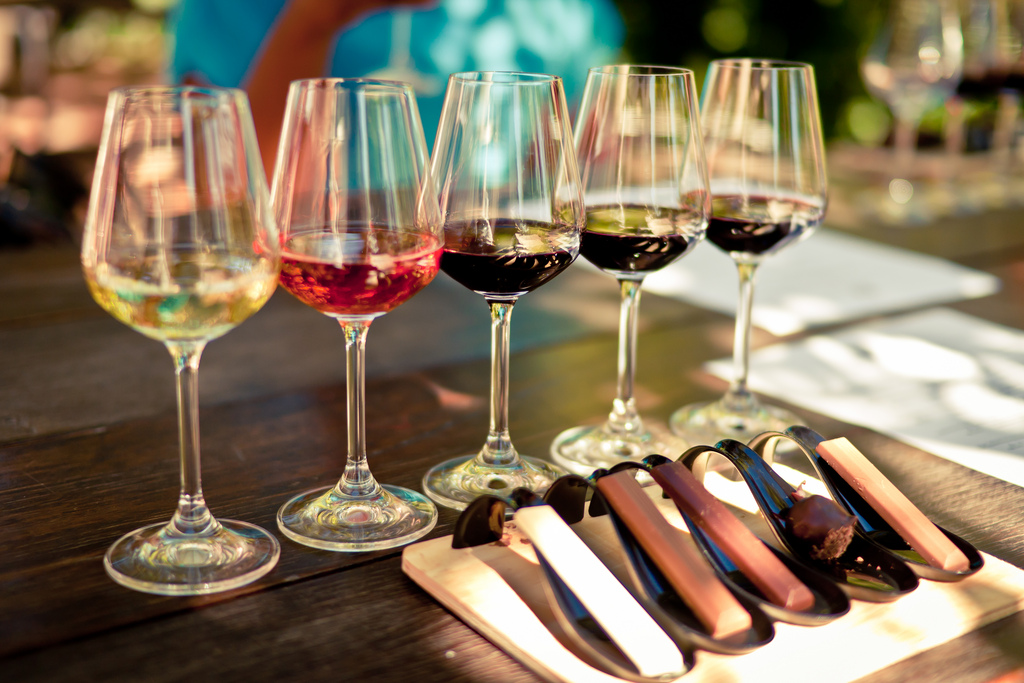 Asking, with the comedian George Carlin, “What wine goes with Cap’n Crunch?” might not actually be as trivial as it sounds. In fact, many people spend a lot of time worrying about which foods go best with which wines. This concern is not frivolous: the tastes in wine interact closely with all the other substances competing for the attention of our taste buds.

The process begins with the tongue. Take a glass of a nice, deep-red wine—for example, a young Cabernet Sauvignon. Sip it, let it bathe your tongue, and look in a mirror. Your tongue will resemble a field of little purple mushrooms or a mass of small purple pegs. These pegs are called fungiform papillae, and, though it’s not apparent to the eye, they are not all alike. Each papilla is made up of between 50 and 150 cells. At the tip of each bunch of cells there is an opening called the taste pore. Little hairs (microvilli) protrude from this pore and come into contact with the molecules emanating from the substance we have put in our mouths. The microvilli are actually cells that bear receptor proteins for the molecules that convey taste.

Our sense of taste has fewer receptor types than does our sense of smell. There are five major kinds of taste: salt, sweet, bitter, umami (or savory), and sour. Bitter, sweet, and umami tastes are detected in the same general way as smells. Thus, items that taste bitter and sweet emit their own characteristic small molecules. These are shed from items placed into the mouth, and interact with the appropriate receptors on the microvilli. This causes a chain reaction in the interior of the cell that is transformed into an electrical impulse. In turn, this impulse is transmitted by nerve cells out of the receptor cell and to the brain. Salt and sour, on the other hand, are thought to operate through a different set of interactions. Instead of binding to a receptor protein, salty and sour molecules change the concentration of electrically charged ions, and hence change the action potential of the membranes in the microvilli. These action potentials are in turn sent to the brain for interpretation, just as the action potentials from sweet, umami, and bitter tastes are.

Not long ago, it was thought that four distinct regions of the tongue tasted different things. Thus, bitter-taste detection was believed to take place at the back of the tongue; sour at the middle of the tongue toward the sides; salty on the edges of the tongue toward the tip; and sweet at the tip. And this way of thinking about taste regions on the tongue led some wineglass makers to reengineer their glasses according to principles that are now in question. The claim was that different-shaped wineglasses delivered fluids to specific parts of the tongue or mouth, and thus to particular taste detectors. Accordingly, manufacturers touted their products as enhancing the taste of wine drunk from glasses specifically designed for Chardonnays, say, or for Cabernets. One company claims that one of its glasses directs wine to the center of the tongue, while another delivers to its tip. The corresponding recommendation is that the former should be used for wine of intermediate acidity, and the latter for wines of higher acidity.

There may be some truth to such claims. But two discoveries have conspired to cast doubt on them. First, molecular analysis of the different taste receptors in the tongue has debunked the notion that this organ is partitioned into taste regions. The field of fungiform papillae on the tongue is made up of a heterogeneous distribution of papillae that detect the five different tastes without reference to region. The brain doesn’t care where on the tongue a food or beverage hits. Second, the fifth taste, umami, has thrown a wrench into the works. Umami is involved in how we taste small molecules called glutamates. These occur in wine, and yet the “region-specific theory” of taste on the tongue has no umami region.

How we combine the tastes and styles of wine and food has recently become big business, though basic commandments about combining food and wine have been around for decades. The first commandment is never to consume wine with garlic, spice, vinegar, or raw fruit. These foods tend to overwhelm the subtle taste of wine. And if you think about the receptors in your mouth that transmit taste sensations to your brain, the prohibition is easy to understand. Garlic, spice, vinegar, and raw fruit are all full of molecules that will react easily and strongly with the receptors of your tongue, leaving few receptors available to register the taste of wine. Something similar applies to other strong or greasy foods, such as pungent Stilton cheese or fatty foie gras. According to the second commandment, you will have to pick your wine carefully for these—sweeter wines, such as Port and Sauternes, respectively, are usually recommended. The third commandment is never to drink white wine with red meat or red wine with fish. That injunction was always on shakier ground, and nowadays, when it’s not unusual for a chef to poach a filet of turbot in red wine, it is entirely negotiable. The basic challenge in drinking wine with food is to match the precise flavors and textures of the wines and foods involved.

So the real test is to determine the combinations of food and wine that will best enhance the taste of both. And understanding the five basic taste receptors and how to stimulate them will open the way to more enjoyable and appropriate combinations. So, for instance, if you are eating a salty dish, you might want to stay away from a wine that stimulates the salt receptors. But also keep in mind that if you eat salty food and drink a sweet wine, that wine will taste sweeter than usual. This is because the salty food will have blocked the majority of your salty-taste receptors, and the tongue will ignore the salt in the wine, even as it is detecting all the sweet molecules. Your available receptors will taste only sweet, which will thereby appear to be much more intense than if you had started with a clear palate. When eating sweet food, on the other hand, an acidic or heavy-textured wine might be best. Chefs have become creative in their wine and food pairings in recent decades, but whether we recognize them or not, successful pairings will invariably draw on the invisible chemical principles of our taste receptors.

Glasses of different shape do direct fluids to different parts of the tongue, although it is not clear whether this attribute of the glass has much effect on the taste of the wine it contains. But where the wine hits the tongue is not the only purpose of differently shaped wineglasses. Even informal experimentation will prove that the glass enhances the sensory experience.

One of the most important features of a wineglass is its thickness, an attribute that underscores the importance of the sense of touch in the overall experience of drinking wine. A thick, clumsy, rounded rim will blunt the experience of drinking any wine, however expensively engraved the cut-glass receptacle may be. A thin, cleanly ground rim, on the other hand, will impart a degree of definition not obtainable any other way.

Also important is the size of the glass’s bowl. Direct experience of a wine comes not only through taste but also through smell, and wines need space to oxidize and expand in the glass, and to release the aromatic and volatile molecules that will stimulate the olfactory receptors. Larger glasses have more than an edge here, especially for red wines. The glass also needs to be shaped in such a way that it can trap and concentrate the rising molecules for appreciation by the nose. It is more debatable whether red wineglasses need be the enormous balloons favored by some who attend commercial wine-tasting extravaganzas, or whether specific varietals need to be savored from glasses of different sizes and shapes.

But what we can affirm is that while compact receptacles such as the tulip-shaped 7¼-ounce (215 ml) official glass of the French Institut national des appellations d’origine et de la qualité may reduce clutter at tastings, and produce a level playing field, they are not big enough to bring out everything a wine has to offer. A better general solution is the similarly shaped but larger (12 ounce, or 350 ml) all-purpose glass in thin crystal available relatively inexpensively from several manufacturers. Some insist that red wines demand an even larger or more open bowl. With your own unique sensory anatomy, only you can decide by trial and error which glass—or range of glasses—is right for you. Fortunately, there are many choices.

One type of wine clearly demands a glass of specialized shape: the sparklers. In the past few decades the spill-prone open goblet, supposedly modeled on Marie-Antoinette’s breast, that ensured the most rapid possible dissipation of the bubbles in Champagne and other sparkling wines, has been largely abandoned. The tall, narrow flute has eclipsed this cumbersome vessel; it provides maximum visual satisfaction in watching the bubbles rise, and it preserves them for a longer period of time. Still, elegant and compact as the flute is, it has its critics. An excessively narrow flute, it is argued, will dull the aromas of a sparkling wine and accentuate its acidity. Accordingly, many experts advocate tulip flutes, which are broader in the beam than regular flutes and have a somewhat wider opening. Our favorite is a broadish flute with a hollow stem, which lets the drinker enjoy watching the bubbles rise all the way from its foot.

As Gérard Liger-Belair reveals in his engaging Uncorked: The Science of Champagne, those bubbles—which are composed of carbon dioxide gas that had been in solution, under pressure, before the bottle was opened—require impurities on the glass in order to form. A bubble needs to nucleate in a vacuity that is at least 0.2 micrometers across, and nowadays, with advancing technology, manufacturing defects in the glass itself are typically smaller than this. So in theory, if the flute were perfectly clean, not a single bubble would form in Champagne. All the gas would escape directly into the atmosphere from the surface of the liquid, rather than rising in those mesmerizing bubble streams from below. Hurrah for imperfection!

From A Natural History of Wine by Ian Tattersall and Rob DeSalle; published by Yale University Press in 2015. Reproduced by permission.

Ian Tattersall is curator emeritus in the Division of Anthropology, American Museum of Natural History (AMNH), New York City. Rob DeSalle is curator of entomology in the Sackler Institute for Comparative Genomics, AMNH. 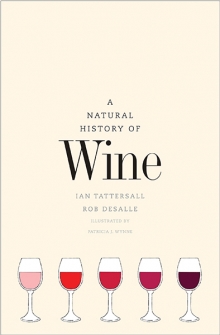 Featured Image: “Pairing: A chocolate and wine pairing at Lanzerac Wine Estate, Stellenbosch, South Africa” by I am Fry, licensed for use on the public domain via flickr.