"The Passion of Creation" by Leonid Pasternak, licensed for use on the public domain c/o 1256 of Book IV of the Civil Code of the Russian Federation No. 230-FZ.

In his amazingly pleasurable new book, In Writing, psychoanalyst and writer Adam Phillips describes writing, in his experience, as an “amazing pleasure.” Lucky him. He sits down to write, he says, and the writing just happens—he’s never “trying” to write and meeting some sort of internal resistance or block. If, as occurs rarely, he can’t write, he simply lays down his pen and does something else. Not being able to write doesn’t plunge him into an abyss of self-hatred.

Boggles the mind, doesn’t it? But leaving my own envy to one side, it’s no bad thing to have another description of the writing process than the one we hear oft quoted from Thomas Mann: “A writer is someone for whom writing is harder than it is for other people.” A line that gets regularly repeated amongst those of us who like to believe that our writer’s block proves we’ve been elected as writers.

The Mannish type of writer is someone for whom writing without self-hatred sounds like an old wives tale. While such writers may well agree that writing, when it’s going well, is amazingly pleasurable, they find few things more tortuous than writing when it’s going badly. So why does the person who wants to write—and who wants this, often enough, more than she wants anything else—so frequently draw a blank when faced with a blank (page or screen)? And why, in those circumstances and the self-lacerations that accompany them, does the feeling of wanting to write not go away? If writing arouses our self-hatred, wouldn’t we be wiser to lay down our pen altogether?

The huge uptake in students attending far-from-cheap creative writing courses implies that there are lots and lots of us compulsively pursuing a vocation that yields very few sustainable careers. And this fact, that there’s a surplus of would-be writers over available readers, tells us something about writing: that it should be ranked amongst the appetites and passions rather than the utilities or practical arts. For as much as writing entails careful craft and hard graft, it also entails the kind of disorders of behaviour and extremity of feelings associated with our appetites for other things—things such as food or sex or babies, for example.

Viewed this way, the blank page is akin to the laden dinner table—it’s what you wanted and it’s there for the taking, and yet there are so many rules and regulations to put a curb on your enthusiasms. This, for me, is where the shame always kicks in: in the sense that others can see very clearly what it is that I want but might not have the wherewithal to get. For along with the laden table comes the problem of table manners: the problem of how to civilize and make respectable our drives, which “problem” takes us all the way back to our formative relations, and the perennial question of whose appetites will and won’t get acknowledged, legitimated, or met.

Yet the blank page is more laden than any dinner table. For the liberty it promises is endless and extraordinary. On a tabula rasa you can write whatever you want, anything you wish.  You can tell the truth, you can fantasize, you can make things up. Or you can in theory, anyway.  Because there’s nothing like writing with all its impossible demands of good form and perfect sense, and with its manifest exposure to criticism, for highlighting the disparity between what it is one dreams of being and the always more compromised reality. If every word I write can be taken out of context and used against me, how then can I fail to feel sentenced by my every sentence?

The writer’s harshest critic is usually her own superego. Yet this critic is also a representative: whether it’s a punitive parent or some other authority figure, a censoring voice has been internalized, fantasied, and turned up to maximum volume of disapproval. So it is that, deep within the blocked writer, one can expect to find a bullied state of self-consciousness in the person of an intimidated child looking up at the giants and wondering “who am I to speak?”—a question that imagines a world divided between actual authorities and the pretender or imposter whom the writer assumes herself to be.

The writer in thrall to this naïve belief in the absolute and unchallengeable authority of others’ words is more than likely to suffer for her art. And yet her insatiable desire for writing intimates that she may also have understood something else about words—something about their changeability, their fluidity, their manner of fragmenting the very authority they seem to bolster. For the real freedom of the blank page resides in its total negation of authority. Who are you to write? Nobody at all. It’s the sole reason that you can write.

Psychoanalysis, for Adam Phillips, is about “the recovery of appetite”: appetite recovered from whatever or whoever may be blocking or inhibiting it. And we can think of writing in similar terms, as a space in which the amazing pleasure to be derived from fluid expression is possible, but only when one frees the blank page—or when one allows the blank page to free oneself—from those unseen authorities who still seem, for so many of us, to have redacted it.

We can begin to appreciate, then, why laying down our pen may not be the best solution to our self-hatred: for no matter what the block is, be it internal or external, the desire for writing is the desire to recover and sustain our appetite not only for literature, but for life.

Devorah Baum is lecturer in English literature and critical theory, University of Southampton, and affiliate researcher with the Parkes Institute for the Study of Jewish/Non-Jewish Relations. She is the codirector of the creative documentary feature film The New Man. 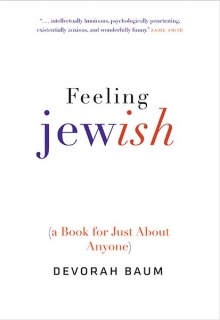