"Tomb of Jesus in the Church of the Holy Sepulchre" taken by Wayne McLean, licensed for use on the public domain under CC by 2.0

As with many useful words, symbol comes from Greek. It means to bring together things that had come apart, the way you might glue the bits of a broken plate together. Then a symbol became an object that stood for or represented something else. It still had the idea of joining things up, but it had become more complicated than simply glueing bits of pottery together. A good example of a symbol is a national flag, such as the Stars and Stripes. When we see the Stars and Stripes it brings the USA to mind. It symbolises it, stands in for it.

Symbols become sacred to people because they represent loyalties deeper than words can express. That’s why they hate to see their symbols violated. There is nothing wrong with burning a piece of old cloth, but if it happens to symbolise your nation it might make you angry. When the symbols are religious, sacred to a particular community, they become even more potent. And insulting them can provoke murderous fury. Hold the idea of symbol in your mind because it will come up again and again in this book. The thought is that one thing, such as red ochre, stands for another thing, such as the belief that the dead go on to a new life in another place.

Another example of symbolic thinking was the way in which marking where the dead lay became important, especially if they were powerful and significant figures. Sometimes they were laid under gigantic boulders, sometimes in carefully constructed stone chambers called dolmens, which consisted of two upright stones supporting a large lid. The most dramatic of humanity’s monuments to the dead are the pyramids at Giza in Egypt. As well as being tombs, the pyramids might be thought of as launch pads from which the souls of their royal occupants had been blasted into immortality.

In time burial rites became not only more elaborate, but in some places they became frighteningly cruel, with the sacrifice of wives and servants who were sent along to maintain the comfort and status of the deceased in their life on the other side. It is worth noting that from the beginning there was a ruthless side to religion that had little regard for the lives of individuals.

A good reading of these clues is that our forebears saw death as the entrance to another phase of existence, imagined as a version of this one. And we catch a glimpse of their belief in a world beyond this one, yet connected to it, with death as the door between them.

So far religious beliefs look as if they might have been acquired by a process of inspired guess work. Our ancestors asked themselves where the world came from and figured it must have been created by a higher power somewhere out there. They looked at the unbreathing dead and decided their spirits must have left the bodies they once inhabited and gone somewhere else.

But an important group in the history of religion don’t guess the existence of the world beyond or the destination of departed souls. They tell us they have visited it or been visited by it. They have heard the demands it makes of us. They have been commanded to tell others what they have seen and heard. So they proclaim the message they have received. They attract followers who believe their words and start living according to their teaching. We call them prophets or sages. And it is through them that new religions are born.

Then something else happens. The story they tell is memorised by their followers. At first it is passed on by word of mouth. But in time it is written down in words on paper. It then becomes what we call Holy Scripture or sacred writing. The Bible! The Book! And it becomes the religion’s most potent symbol. It is a physical book, obviously. It was written by men. We can trace its history. But through its words a message from the world beyond is brought into our world. The book becomes a bridge that links eternity with time. It connects the human with the divine. That is why it is looked upon with awe and studied with intensity. And it is why believers hate it when it is derided or destroyed.

The history of religion is the story of these prophets and sages and the movements they started and the scriptures that were written about them. But it is a subject that is heavy with controversy and disagreement. Sceptics wonder whether some of these prophets even existed. And they doubt the claims made in their visions and voices. Fair enough, but that is to miss the point. What is beyond dispute is that they exist in the stories told about them, stories that still carry meaning for billions of people today.

In this book we’ll read the stories the religions tell us about themselves without constantly asking whether that was the way things actually happened back then. But because it would be wrong to ignore that question entirely, we’ll spend the next chapter thinking about what was going on when those prophets and sages saw visions and heard voices. One of those prophets was called Moses.

From A Little History of Religion by Richard Holloway, published by Yale University Press in 2016. Reproduced by permission.

Richard Holloway is the former Bishop of Edinburgh and Primus of the Scottish Episcopal Church, is an internationally popular writer and broadcaster. His more than twenty books include the best-selling Leaving Alexandria: A Memoir of Faith and Doubt. He lives in Edinburgh, UK. 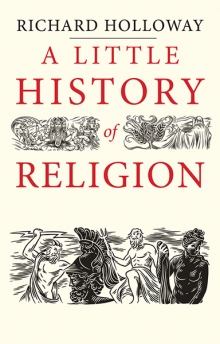