First, let us remember that terrifying images of throat-slitting are not new. The atrocity of which our discourse community is (not) aware is more than a decade old: It did not begin with the execution of the American journalist James Foley, beheaded on prime time in August 2014.

It dates back to November 2004, when the first Internet slaughter took place as a reprisal by Bin Laden’s organization for “the satanic treatment of the prisoners at Abu Ghraib,” the military prison where American soldiers were abusing the virility of Iraqi prisoners, after the fall of Saddam Hussein in December 2003.

The first person beheaded live on the Internet was Nick Berg. He was in Iraq because he thought it was an excellent career opportunity, in computers and communications—what else? Little did he imagine that he would be providing the substance for said communications, still less that he would be the first in what would turn out to be a macabre series: The American media correctly assessed his decapitation, a throat-slitting at the time, already, as an “initial violent response to the abuses committed at Abu Ghraib” and the “first public execution due to the new means” provided by the Internet.

This is proof that memory, in the area of communications, suffers from a degree of atrophy that impacts directly on a community of discourse: In August 2014 the media qualified Foley’s killing as an “ominous development,” forgetting that they had said the same thing ten years earlier.

It took ten years for the topic of these killings, inaccurately called decapitations, to be constituted in our discourse community, whereas the topics of the poor treatment of prisoners in Guantánamo and of interrogation techniques that were similar to torture had, on the contrary, come into coalescence. Justice became a key talking point: Why does the United States behave so unjustly toward prisoners?

By contrast the same community of discourse refuses to register the face value of decapitation images: decapitations are judiciary beheadings. In short, a social argument about the unjust treatment of enemies erased an argument about what sort of justice is at work in jihadist executions. The term judiciary is used here intentionally, as far as the killers are concerned, to convey the fact that the Caliphate’s militants are, in their view, performing an act of justice. Our discourse community should no longer deny the eruption of this judicial violence, even if all we see of these beheadings are fragmentary and bowdlerized images that are presented and erased from viewing as “mad” or “barbaric.”

In terms of the sound of violence, in 2004, the cries of “Allahu akbar” were already resounding, but in a sort of cacophony, a verbal paroxysm. Since then, the emission of the slogan has been codified in the scripted unfolding of the executions. In 2004, the soundtrack had the spontaneity of cinéma vérité, direct cinema, down to the static. In 2014, the soundtrack is almost post-production quality. In between these dates, the picture track and the shaky shots (handheld camera style) of the first Internet execution have disappeared in a careful montage of actual executions. Something happened.

What happened is precisely the making of a jihadist discourse about judicial beheadings, made of images and sounds, iconic and sonic, while controls are being applied onto our community of discourse to frame any further understanding of the problem.

So, decapitations and beheadings have been taking place online for ten years. But who is being beheaded or, more precisely, of which beheadings is the general public aware?

For these are not just victims selected to shock Westerners; they are also, in great numbers and without videographic staging, people who happen to be in Syria, in Iraq, in Kurdistan, in the wrong place at the wrong time, who are accused of being collaborators, homosexuals, adulterers, cigarette resellers, kids, old people, in short, people living where the Caliphate governs. All this is filmed with cell phones, in makeshift documentaries. You can see a kid kneeling, being caned for lying, seemingly more afraid than hurt. You can see a man, accused of taking drugs, whipped, then going on his way. Sharia law is applicable to the entire gamut of punishments, up to and including executions. We do not talk much about this in the West, we do not show the images. The execution of an ordinary guy in the middle of the bazaar or on a pedestrian street, with young men on motorbikes and women shopping for groceries, does not interest us.

These murders (or these judiciary punishments) do not belong to our discourse community. In our discourse community actions or reprisals undertaken by the so-called moderate militants—who with the judicious support of the West are on-the-ground actors—appear even less frequently. Our vision of brutality is one-way.

This is how discourse communities can perfectly shut their eyes or say “that is not true.” In 2004 there were accusations that the Nick Berg video was a “fake,” and that debate is still raging on the Internet. However, he was decapitated. On that score there is no argument. This debate regarding what is “fake” is regularly fueled by sudden confessions by so-called repentant jihadists or some who, presumably, have escaped the Caliphate. One such confession, by a “longtime member of the Caliphate,” explains why the victims are so calm: They do not know what is about to happen to them next, to be exact, several “fake” executions. Possible. Also possible is that these are proof of courage, but strangely “courage” is not evoked. Even this quality is done away with. This technical confession by a “fake” survivor is the last word in the “fake” debate. Which comforts our discourse community.

This long delay in realizing the innovative reality of terrorism and these recurrent debates about the “fake”-ness of the decapitations lead in fact to an anecdotal notion of the functioning of a discourse community that denies what does not enter into its sphere and rewrites its own film of reality, with a soundtrack and a picture track that entrench its clichés.

The short memory, the negation and the refusal of the real, are in fact the result of three behind-the-scenes control mechanisms in charge of structuring the tendencies of any discourse community.

From Words Are Weapons: Inside ISIS’s Rhetoric of Terror by Philippe-Joseph Salazar; Translated by Dorna Khazeni, published by Yale University Press in 2017. Reproduced with permission.

Philippe-Joseph Salazar is Distinguished Professor of Rhetoric in the Faculty of Law at the University of Cape Town and past Director in Rhetoric and Democracy at the Collège International de Philosophie in Paris. In 2008 he received the Harry Oppenheimer Fellowship Award, the top prize for research on the African continent. In 2015 he received the Prix Bristol des Lumières for the French edition of this book.

Dorna Khazeni was a finalist for the PEN USA Translation Award. She has published her translations from French in Vanity Fair, Harper’s, Zoetrope AllStory, The Believer, and elsewhere. 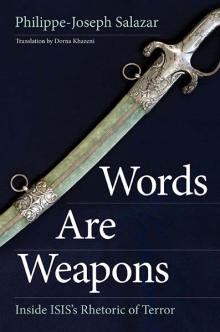