Begin on an optimistic note: Americans of the twenty-first century are much better equipped for citizenship than their counterparts were at the dawning of the Progressive era. About 10 percent of young Americans graduated high school in 1910; it was almost 80 percent a century later. The length of the workweek has also declined (except for the workaholics at the top), as has the proportion of people engaged in backbreaking labor. Life in the twenty-first century is no picnic; but large numbers of Americans have the time and training needed to increase their practical commitment to citizenship if they are offered suitable opportunities for constructive contribution.

Start with the problem of big money. To reform the system, we need something new: give every voter a special credit account containing $50 that they can spend only on federal election campaigns. Armed with their cards, voters could go to a secure Fair Election website and send their “patriot dollars” to favored candidates and political organizations. About 130 million Americans went to the polls in 2012. If they also had a chance to vote with their dollars, they would have injected about $6.5 billion federally funded patriot dollars into the campaign—greatly diluting the power of the private $5+ billion spent by all federal candidates and their nominally “independent” campaign supporters during the last electoral cycle.

My colleague Ian Ayres and I work out the details at book length in Voting with Dollars (2004). Over the past decade, Supreme Court decisions on campaign finance have enhanced the case for our initiative. In contrast to traditional Progressive efforts to suppress big money, patriot dollars increase the overall funding available for speech; big donors could keep on giving, but the statute would increase the $50 citizen grants over time to guarantee that two-thirds of all funding came from patriotic sources. Since the program relies entirely on each patriotic citizen’s decisions, it also avoids standard First Amendment challenges that have led the Court to sweep away top-down forms of command-and-control regulation.

Even more important, such patriotic finance would invigorate the practice of ordinary citizenship. Once voters have fifty patriot dollars in their pockets, candidates will have a powerful incentive to reach out to them as they launch their campaigns. Fund-raising would become a community-building affair—a box lunch for two hundred could gross $10,000!

These outreach efforts will provoke ordinary Americans to take their citizenship seriously as they engage one another in hundreds of millions of day-to-day conversations: Who should get the money? Who is a charlatan, and who is really concerned about the country?

Patriot dollars have many merits, but one great limitation. Once citizens go to a secure website to beam their patriot money onward, the candidates will continue to spend most of the cash on sound-bite appeals for hot-button issues. Patriotic finance will redistribute the sound bites, emphasizing themes with greater resonance for ordinary citizens. But we will still be living in a sound-bite democracy, and this isn’t good enough.

The next challenge is to provide citizens with the tools they need to engage in thoughtful political discussion. An exemplary model is the American jury. Twelve people begin in total ignorance, but they learn a great deal during the course of the trial. After hearing competing arguments, and reasoning together, they regularly—though not invariably—come up with sensible conclusions.

The task is to design a similar format for politics. My friend Jim Fishkin and I have come up with a practical proposal based on a new technique, deliberative polling, which Fishkin has field-tested in seventy-five settings throughout the world—from Australia to Bulgaria, China to the E.U., Athens to Philadelphia.

Each poll invites a few hundred citizens to spend a weekend deliberating on a major public policy issue. Before they arrive, participants respond to a standard questionnaire that explores their knowledge about, and positions on, the problem. They then answer the same questionnaire after completing their deliberations.

Comparing these before-and-after responses, Fishkin and his fellow social scientists have rigorously established that participants greatly increase their understanding of the issues and often change their minds concerning the best course of action. Ten-percentage-point swings are common. No less important, participants leave with a more confident sense of their capacities as citizens.

These experiments suggest a new way of thinking about democratic reform. In our book Deliberation Day, Fishkin and I urge the creation of a new national holiday to be held two weeks before critical national elections. Ordinary business would come to a halt, and citizens would gather at neighborhood centers to discuss the central issues raised by the leading candidates. Nobody would be forced to attend, but as with jury service, participants should be paid a stipend for their day’s work of citizenship. Deliberation Day (DDay) would begin with a televised debate between the candidates, but citizens would then continue the discussion in small groups of fifteen, and later in larger plenary assemblies.

The small groups begin where the televised debate leaves off. Participants engage in an hour’s conversation that tries to define questions that the candidates left unanswered. Everybody then proceeds to a 500-citizen assembly to hear their questions answered by local representatives of the major candidates. After lunch, participants repeat the morning procedure. By the end of the day, citizens will have moved beyond the top-down television debate that kicked off the proceedings. They will achieve a bottom-up understanding of the choices confronting the nation. Discussions begun on DDay will continue during the run-up to Election Day. While many Americans may have skipped DDay, their casual conversations with DDay participants will draw them into the escalating national dialogue.

If Deliberation Day succeeds, sound-bite democracy will play a much-reduced role in campaigns. Candidates would have powerful incentives to create longer and more substantive infomercials. Newscasts would be full of exit polls determining the extent to which DDay discussions had changed voting preferences—framing the intensifying debate that culminates on Election Day.

Our book works out the proposal for DDay in detail. But it is more important to see how, together with patriotic finance, it begins to add up to a new progressive agenda for engaged citizenship. From the very beginning of the campaign, candidates will reach out to ordinary Americans with great vigor—if only to pick their pockets and get at patriot dollars. As citizens begin “to vote with their dollars,” Deliberation Day will loom on the horizon. Candidates will no longer spend most of their money on thirty-second sound bites. They will beam longer infomercials to enable partisans to state their case intelligently on DDay. By the time Election Day arrives, voters will go to the polls with a far better sense of the choices confronting the nation, as well as the nature of the competing solutions proposed by the candidates.

The progressive promise of DDay can be further enhanced by an ongoing effort to shape the Internet as a force for citizenship deliberation. The blogosphere is destroying professional journalism. The speed of this transformation is extraordinary. In the United States, the overall number of newspaper reporters and broadcast news analysts dropped from 66,000 in 2000 to 52,000 in 2009, including devastating cuts in the Washington press corps. This is only the beginning. The very existence of journalism is at stake.

Blogging cannot be expected to take up the slack. First-class reporting isn’t for amateurs. It requires extensive training, and plenty of contacts, and large expenses. It also requires reporters to have a well-honed capacity to write for a broad audience—something that eludes the overwhelming majority of think-tank policy wonks, not to mention academic specialists. And it requires editors who recognize the need to maintain their organization’s long-term credibility when presenting the hot-button news of the day. The modern newspaper created the right incentives for high-quality reporting, but without a comparable business model for the Net, blogging will degenerate into a postmodern nightmare—with millions spouting off without any concern for the facts.

Enter the Internet news voucher. Under my proposal, Internet users click a box whenever they read a news article that they think helps them understand their political choices. These reader “votes” are then transmitted to a National Endowment for Journalism, which would compensate the news organization originating the article, according to a strict mathematical formula: the more clicks, the bigger the check from the endowment.

As a safeguard against fraud, each reader would have to convince the endowment that she is a real person, not merely a computer program designed to inflate an article’s popularity. Before she can click in support, she will have to spend a few seconds typing in some random words or syllables. Though the time spent typing may seem trivial, it will help discriminate between the cynics and the citizens. After all, the reader won’t receive any private reward for “wasting” her time, day after day, clicking her approval of articles deserving public support. She will participate only if, as a good citizen, she is willing to devote a few moments to the larger project of creating a vibrant public dialogue.

The resulting system will bear a family resemblance to voting with dollars and Deliberation Day. The National Endowment would set up a voucher system that, like patriot dollars, permits the decentralized show of support by concerned citizens. Like Deliberation Day, it engineers a credible microcontext for the responsible exercise of citizenship—but this time on a day-to-day basis.

No need to exaggerate. I am not asking modern Americans to don their togas and prance about some mythic version of Periclean Athens. I am asking them simply to spend a minute or two clicking in support of newspapers and candidates, and take a biannual holiday trip to their local community center to talk with their neighbors about the choices facing the country. These small but repeated acts of citizenship won’t prevent Americans from building a fulfilling personal life—which is the key, so far as they are concerned, to the pursuit of happiness. But it will permit them to move beyond Progressive dreams and build, step-by-step, a practice of citizen engagement worthy of a democratic republic. 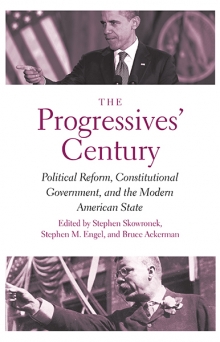