Recognizing Brandeis as an American prophet seems more relevant today than ever. Brandeis’s consistent opposition to the curse of bigness made him one of the greatest constitutional philosophers of the twentieth century. He is also the Jeffersonian prophet whose prophecies have been most consistently vindicated. The “people’s lawyer” who predicted the crash of 1929 was the most ferocious critic of economic and political consolidation in an age of “too big to fail.” More than any other Supreme Court justice, he can instruct us in the need for translating the constitutional values of privacy and free speech in an age of technological change. And as the leader of the American Zionist movement, he was the most prominent advocate of a vision of cultural pluralism that remains especially salient in an age of globalization and technological homogenization. His influence was so great in persuading Woodrow Wilson and the British government to recognize a Jewish homeland in Palestine that Jacob de Haas, Theodor Herzl’s American secretary, wrote that “the most consistent contribution to American Jewish history in the twentieth century has been that of Louis Dembitz Brandeis.”

Brandeis, who served on the Supreme Court from 1916 to 1939, was the leader of a Jeffersonian tradition that is as distinctive in the twenty-first century as it was during the New Deal era: a progressive champion of federalism and the autonomy of the states. (He was the first to characterize the states as “laboratories of democracy,” a phrase that has become the touchstone of libertarian and conservative defenders of federalism today.) At the same time, Brandeis embodies a bipartisan constitutional tradition that is once again gaining broad adherents on both sides of the political spectrum, from Tea Party libertarians to progressive civil libertarians: a defender of personal and economic liberty and a foe of centralization in government or business. The states fulfilled his Jeffersonian belief that smallscale communities were most likely to satisfy human needs and louis d. brandeis 6 to allow citizens to develop their faculties of reason through the rigorous self-education that Brandeis believed was necessary for full participation in American democracy.

At a time of intense polarization between conservatives and libertarians, who prefer small government and free enterprise, and liberals and progressives, who advocate a more energetic social welfare state, Brandeis is the historical figure who represents and blends the ideals of both sides of this crucial debate. He endorsed Jeffersonian ideals of small government and local democracy but applied those ideals to uphold state regulations that tamed the excesses of big business and monopoly. He offers, therefore, a unifying vision of liberty and democracy for our divided age.

Like Jefferson, Brandeis believed that the greatest threat to our constitutional liberties was an uneducated citizenry, and that democracy could not survive both ignorant and free. And because of Brandeis’s pragmatic sense of human limitations, he believed that only in small-scale businesses and communities could individuals master the facts that were necessary for personal and political self-government. For this reason, as a Supreme Court justice, he generally championed judicial deference to state legislation—except when it clashed with protections for freedoms explicitly enumerated in the Constitution, such as the First Amendment’s protections for free speech or the Fourth Amendment’s protections against unreasonable searches and seizures. In those cases, he became the most prescient defender of civil liberties of the twentieth century.

From Louis D. Brandeis by Jeffrey Rosen, published by Yale University Press in 2017. Reproduced by permission.

Jeffrey Rosen is President and CEO of the National Constitution Center, professor of law at the George Washington University Law School, and a contributing editor of the Atlantic. 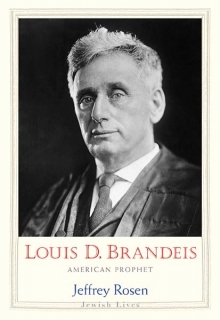