She always seemed to be an example. She was an example of chutzpah. As one fan would say of Streisand’s legacy, “For me, it began with her first revelation: by shoving a Jewish girl’s face in front of the cameras she was announcing, beneath all the self-deprecation, I’m here, I’m a bagel, and you’re gonna learn to love me.” She was an example of how to succeed. “Hers has been a career built on telling herself—telling everyone—that when what you’re reaching for is just over the horizon,” biographer Tom Santopietro wrote, “the only way you’ll get there is to try harder, to keep showing everyone, to keep topping yourself.” Being good is not good enough. She was an example of power as well as perseverance. Another Streisand biographer, Anne Edwards, said that Streisand did not relate to her audiences the way Judy Garland or Edith Piaf did, singers to whom she had been compared. They displayed their victimhood. They suffered, even in the strain with which they delivered their songs, and their audiences shared their suffering. Streisand experienced her own suffering, but she was no victim. She hit back. As Edwards put it, “Streisand fans are not sharing her pain, they are celebrating her strength to overcome the obstacles that they perceive she has overcome—turning homely into beautiful, making ethnic mainstream, daring to cross over into a man’s world as director, producer, business executive.” And though Edwards didn’t say it, she even overcame the hostility she elicited for the strength she exhibited. Many resented her. Streisand didn’t seem to care.

But none of this would have been possible if Streisand hadn’t been that homely Jewish girl from Brooklyn. Without those Jewish roots, there would have been no Jewish metaphor. There would have been no sense of otherness, no hostility to her looks and her manner, no harping on her loudness and boldness and bossiness and indomitability and her lack of femininity, and there would have been no loneliness for her audience to feel and with which it could identify, no transformation of the ideal of beauty, no acceptance of women on-screen to be as self-possessed as men had always been allowed to be, no sense that a woman could will herself to be strong and beautiful and desirable, no feeling that, as Pauline Kael had put it so long ago, talent was beauty. None of these things would have been possible without Jewishness, and none of them would likely have been possible without Streisand. Felicia Herman concluded that “Streisand’s lasting legacy may be that her characters have provided a bridge between a film world where Jews barely existed and where women were valued only for their looks and their submissiveness, and a world yet to come, where both Jews and women are treated with the respect, complexity, and richness they deserve.”

From Barbra Streisand by Neal Gabler, published by Yale University Press in 2016. Reproduced by permission.

Neal Gabler is the author of An Empire of Their Own: How the Jews Invented Hollywood; Walt Disney: The Triumph of the American Imagination; Winchell: Gossip, Power and the Culture of Celebrity; and Life: The Movie: How Entertainment Conquered Reality. 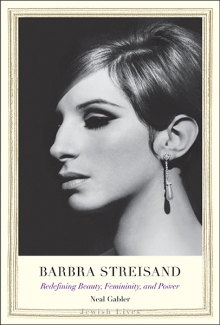