We wish our heroes to be attractively flawed: brave but heedless, good but confused, wise yet inexplicably sad. A minor crack in character makes the vessel seem that much more precious. Still, while acknowledging the complexity behind the clarity of Lincoln, or the darkness that lurked beneath Churchill’s inspired eloquence, we fix on the uplift and ignore the downdrafts.

David confounds such simplicities. Other ancient figures have stories, powerful ones; but they are fragments of character, marked by tendentiousness and heavy symbolism. David is the first person in history whose tale is complete and vital, laced with passions, savagery, hesitation, betrayal, charisma, faith, family—the rich canvas of a large life. He is capable of great acts, expressions of lasting piety, and of startling cruelty. David’s failings are not slight or endearing. Whitman famously said of himself that he contained multitudes. Long before Whitman, the Bible’s premier poet had a soul so large that thousands of years of interpretation have not exhausted its landmarks and byways.

From this distance, we cannot know what is a literal recounting and what is invention or distortion. The character of David convinces, along with its shocks and incongruities. Surviving rebellions, fraternizing with the enemy, committing public adultery and proxy murder, David dies peacefully in bed. Scarred, still roiled by revenge untaken, having lived a hard life, he remains essentially unharmed. We read of his uneasy relationships with wives, children, his warriors, and the people. His story is like the Gestalt experiment: You can choose to see David as hero or knave. His enemies keep disappearing, but he disclaims any part in their death. He sustains enough loyalty to remain king but also endures rebellion, even from within his own family. The explanation of traditional piety is simple and elegant: God is with him. The modern reader suspects that while trusting in God, David is a man careful to secure himself a little earthly insurance nonetheless.

Novelists take advantage of the story’s ambiguity. Stefan Heym’s King David Report depicts a court historian trying to tell the truth about David but under constant pressure to exaggerate his righteousness. (One character says to the historian: “If you know as much as I think you know, Ethan, I think you know too much.”) The novelist, who lived part of his life in communist East Germany, understood what it was to try to tell stories with shadows about those in power. A powerful state versus the truth is the theme of Heym’s tale, and he uses ancient Israel to indict the modern regime.

Historian Pieter Geyl wrote a book called Napoleon: For and Against, chronicling the opposing views of historians on Napoleon. A reader of the commentators and scholars on David could compile a similar book. One portrays him as a paragon of faith who fell but once, another as a Machiavellian villain who cannily rose to rule. Each has hold of a piece of what makes David so compelling. The drive to see David’s character as perfectly consistent bRemove featured imageetrays a blinkered view of human nature. David contains more than any single explanation can embrace. He is, in the words of historian Baruch Halpern, “the first human being in world literature.”

Why would this man, king of a small, warring land, be chosen by great religious traditions to give birth to the Messiah? Why must the Messiah come through the David line? No less remarkable than the man himself is what religious tradition has done with him. David, fissured and flawed, is held up as the exemplar who is forerunner of the world’s redeemer. Surely there is a less ambiguous ancestor, although we would search in vain for a more intriguing man.

David’s story is told in the Bible in very loose chronological order. It is crammed with incidents and characters. To recount the tale meticulously would require a longer book, and might not leave us any wiser about the character of David. So in the pages following I have walked through David’s life and written about each of the roles that define him—the Young David, David as Lover / Husband / Fugitive / King / Sinner / Father / Caretaker / Messianic forebear—and have included other roles as poet, musician, and warrior. Inevitably these categories will flow into one another, but in the end, cutting across slices of the story to build a picture of this man, we will have a rounded portrait. Then perhaps we will be better able to answer the question: Why, of all the characters in history, does David hold such an exalted place?

Here is a drama full of deeds heroic and base, a story of faith in God coupled with an equal pursuit of power and military might. It is also a story of the power of women. Women, as we shall see, repeatedly push the hinge of the narrative in the direction it needs to go. The presence of women is complemented by the absence of miracle. God is invoked so often that even some skilled readers fail to notice that, with the murky exception of raising Samuel from the dead, there is not a single supernatural miracle in the entire story of David, the longest continuous narrative about a human being in the entire Hebrew Bible. At times it seems that when David needs a miracle, God finds a woman to enact it in an earthly manner. Benefiting from this divine / distaff bounty is a man whose relationship with women is the most detailed and complex in the Tanach, as the tripartite Hebrew Bible—Torah (Pentateuch, Ta), Nevi’im (Prophets, Na), and K’tuvim (Writings, Ch)—is traditionally known.

So versatile and enduring is David in our culture that rare is the week that passes without some public allusion to his life. Every sex scandal involving prominent men is sure to evoke comparisons with David and Bathsheba. Successions in power allude to David and Saul. Unequal struggles are summarized with the battle of David and Goliath. Few symbols fulfill so many functions: If you reach for an underdog, if you seek a precedent for the abuse of power, if you look for an ancient model of friendship or (perhaps) same sex love, if you want a monarch who is also a bard, if you want to suggest a kingship that will never end, and so very much more—David is your man. He is a character whose reputation is as ramified, as remarkable, and as enduring as his story.

From David by David Wolpe, published by Yale University Press in 2014. Reproduced by permission.

David Wolpe is the rabbi of the Sinai Temple in Los Angeles. He is the author of seven books, including the national bestseller Making Loss Matter: Creating Meaning in Difficult Times. He lives in Los Angeles, CA. 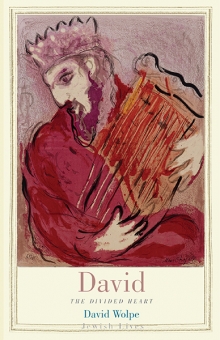