Photo by Peter Feghali on Unsplash

What can be said about the concept of remembering the past and writing history in general, applies to the origins of Christian thinking about the past in particular. The topics of early Christian historiography, however, are rather specific: Narratives about the past are basically narrative depictions about how the gospel proclamation begun. The canonical gospel writings and Acts contain a story line of what Jesus of Nazareth said and did, and how the Jesus-followers and the apostles founded and guided community-life in memory of him.

In and beyond early Christian times, the hermeneutical dimension of remembering the past and reflecting about time becomes evident, at least, in a threefold way: First, in Western culture(s), remembering the past has led to the writing of history. From Herodotus’ time onwards—and may be, even before that—the Greco-Roman and Jewish-Christian historians were eager to shape narrative accounts about past events. The idea of history-writing or historiography was primarily not about documenting bruta facta, but, rather, to define past events as ‘events’ in the sense of selecting them out of a mass of historical incidents and making them to be the object of a story line by which the author—acting as a historian—intends to show to his reader(s) example-wise how one can make sense of the past and learn from it: The purpose of historiographical learning is, for instance, to provide causal explanation for sequences of historical incidents, to reveal the moral attitudes of protagonists acting, to show human strategies of coping with fortune and catastrophe, and to interpret the divine interaction with the human world. Accordingly, the Roman rhetorician Cicero once called ‘history’ being shaped by means of historiography, the ‘teacher of life’ or the ‘light of truth’. In earliest Christianity, the gospel writers come with similar claims when recommending their narrative accounts to their readers and authorizing it as the appropriate depiction of past events which are situated around Jesus of Nazareth’s life and ministry.

Since ‘history’ is both, the narrative object and the factual result of historiography, there is another, a second, hermeneutical dimension to be identified in processes of remembering the past and reflecting about time: ‘History’ being shaped by means of historiography, is to a huge degree dependent on the individual historian who either acts as an eyewitness of the events told or as an analyst of testimonies and literary sources. In any case, the historian is an interpreter or a ‘hermeneut’ of the past which he wishes to un-code for the present audience. In their perception of the history told, the readers have to rely on the historian’s integrity. From Thucydides to Flavius Josephus or ‘Luke’, the gospel writer, historians intend to disclose their historiographical principles and methods in order to show themselves as reliable witnesses—of either first or second order—for the events being preserved by their narrative account.

Because of his particular geographical background and context, the historian has a certain viewpoint on the events told; and due to his rhetorical education, the historian will implement various literary skills and genres. What kinds of literary authors and historiographers do we particularly meet in early Christian times? As ‘historians’ the gospel writers themselves remain anonymously to us—they interpret the past without telling us who they are. St Paul, in contrast, reveals his identity, and creates autobiographical accounts. Despite Paul’s interest in shaping a collective memory as literary memory, the apostle nevertheless restricts himself to the genre of letter-writing instead of writing historical monographs or tractates as his contemporary Philo of Alexandria does. In neither way is the genre of historiography stricto sensu fully developed in early Christian times.

Third: In the field of history-writing, hermeneutical and ethical concerns constantly go hand in hand. It is not only the historian who wants to prove the integrity and credibility of his historiography by making his moral claims more or less explicit. It is rather the whole project of remembering the past and writing history as such which is of hermeneutical and ethical significance. History-writing is based on various decisions about what has to be preserved and remembered, and what can be left out. People and events that lack paradigmatic value or are considered to insult public opinion will possibly be damned by a collective politics of forgetting (damnatio memoriae). It might be typical of Jewish and early Christian memorial culture in general to insist on not forgetting. Positive and negative characters and events—like Judas Iscariot and the passion story—rather become a substantial part of the early Christian collective memory. According to early Christian literary identity, memory per se is not suppressed—what happens at worst is that ‘enemies’ or opponents are anonymized, and thus stigmatized as meaningless.

In early Christian times, writing about the past deals with present community life in many ways: To remember Jesus’ sayings and teachings gives orientation in current ethical discourses; to remember the apostles’ deeds helps to implement personal role models which are of paradigmatic value. However, the greatest achievement of early Christian historiography might be the way in which Christ-believers learn to reflect about time. Early Christian narratives about the past are to be seen as an invention of literary strategies by which Christ-believers cope with the delay of the parousia: The fact, that the end of time—though near—has not arrived yet, calls for plausible narrative accounts about the origin and the content of the gospel proclamation in which various authoritative proposals are made of why and how the delay of the parousia follows the divine plan, and how it actually provides extra space of time during which the group of Jesus followers can prove itself.

Early Christian historiography by means of gospel writings takes place in a constant discourse about the proper understanding of past and present times. The discursive fight about history thus leads to a variety of narrative memories and counter memories. Christian history emerges as a commencing literary culture, which already from the beginning develops its specific literary forms and genres: The patterns of how Christ-believers depict the past and reflect about time follow the genre of gospel literature. ‘Christian history’ is born when Mark and Luke-Acts provide their concepts of literary memory and suggest narrative modes of perceiving time. 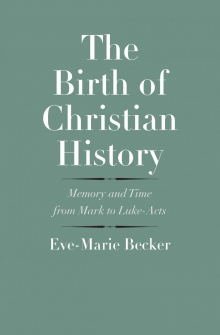