Working backwards from the ‘eureka moment’ offers an intriguing perspective: we find the bicycle an inspiration for the aeroplane, a talking automaton suggesting the telephone, early television dependent on discoveries made with a blowpipe and the microchip manufactured with a printing technique that dates from the nineteenth century.

Inevitably a history such as this has to deal on occasion with arguments over priority of invention, such as the patent dispute between Alexander Graham Bell and Elisha Gray: who first designed a working telephone? But such rivalries have never been a reliable guide to historical truth and they are of tangential interest. More significant by far is the contribution to innovation made by those who chose not to patent their discoveries, such as leading scientists Michael Faraday in England and Joseph Henry in the United States. In fact it is not uncommon for inventors to give generous recognition to those whose discoveries made their own possible even though, to protect themselves financially, they might find themselves in disputes over patents. There is, for example, the touching story of the homage paid by Wilbur and Orville Wright to the German aviator Otto Lilienthal who inspired them with his daredevil glider flights. When they had succeeded with their invention of powered flight and had become wealthy and world famous, Wilbur paid his respects to Lilienthal’s widow in Berlin and the brothers later sent her a handsome Christmas present

The vast majority of inventions are not subject to any priority dispute, simply because nobody is interested in exploiting them commercially. It has been said that knowing what to invent is as important as being a creative technician, and one of the surprising discoveries of this history is that few people have the foresight to imagine that something novel – such as the telephone of the 1870s – will be popular. It was certainly not regarded as something that had to be invented to solve a contemporary problem. Notoriously, Sir William Preece, then chief electrician to the British Post Office, asked in 1879 by the Select Committee on Lighting by Electricity, which was concerned about interference from phones if he thought ‘the telephone will be an instrument of the future that will be largely adopted by the public’, replied that it might be in America but not in Britain. ‘We have a superabundance of messenger boys, call boys etc., the Americans have not.’

This failure of imagination is found over and over again to be characteristic of those in established industries. Because inventors are so often trying to achieve what is conventionally regarded as hare- brained, those who are prominent in science or industry will distance themselves from the enterprise. There are examples in the history of scientists in the nineteenth century not wanting to be associated with those who were trying to build a powered aeroplane, as to lend the endeavour credence might brand them as cranks. The amateur and outsider has no such fears, which is why so much technology, such as the personal computer, starts out as a ‘home- brew’ and becomes mainstream only when it is shown to be practicable. It is not until then that industry adopts the invention and it becomes a necessity.

In reality, necessity is rarely the mother of invention. Who needed an aeroplane or a television before they were invented? What drives inventors, and has ruined any number of them, is the desire to show that something that everyone says is impossible could be made to work. Their success, if it comes, will be dependent on a great many earlier inventions as well as on the ingenuity of scientists and philosophers who themselves had no interest in how their discoveries might be turned into something of practical use. A classic example is the laser, which was developed without any thought that it would be ideal for reading bar codes.

The sense of ‘eureka’ as a moment of inspiration is very different from the concept of the ‘eureka moment’ – a point where there is a practical breakthrough in the quest to prove that the impossible is possible. There is nothing sudden about the eureka moments identified in this history: they are not simply ‘good ideas’, although they might involve a great deal of ingenuity. Invariably, the breakthrough comes after years of painstaking experimentation in which many different technologies are brought together. Yet those moments when, against all the odds, a new invention has been created are usually vividly exciting.

Few eureka moments can match the triumph of the Wright brothers who, throwing caution to the wind on the sand dunes of North Carolina in the winter of 1903, first got off the ground. It was a triumph which did not earn them instant fame and fortune but they knew they had achieved what many still believed would be impossible. Vital to their success was the enthusiastic help of a small community of fishermen and men from a Life- Saving Station who all along regarded Wilbur and Orville Wright as ‘plumb crazy’.

From Eureka: How Invention Happens by Gavin Weightman, published by Yale University Press in 2017. Reproduced with permission.

Gavin Weightman is a journalist, historian, and former documentary filmmaker. He has published more than twenty books, including The Frozen Water Trade: A True Story and Children of the Light: How Electricity Changed Britain Forever. He lives in London. 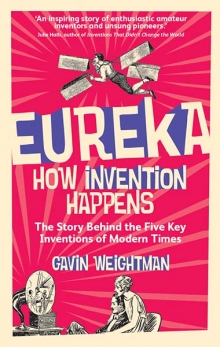